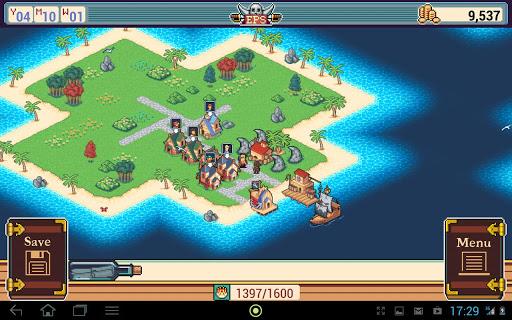 Epic Pirates Story is a story about pirates, but it’s really not very epic.

No sense beating around the bush about it: Epic Pirates Story, the first game from indie studio Epic Devs LLC, borrows heavily from the popular Kairosoft model, with colorful pixel art graphics, cute, chatty characters and simplified combat and city management mechanics. In fact, the game’s description on Google Play specifically mentions that it will remind you of Kairosoft’s work and if you’re familiar with that particular oeuvre, it will.

Unfortunately, the beauty is only skin deep. Epic Pirates Story nails the Kairosoft visual style and looks great doing it, the music is jaunty and the sound effects decent, if somewhat spartan. The gameplay is very simple as well, and while the built-in help file is a bit thin, it covers the basics more than adequately. But it doesn’t take long to realize that there’s very little to it in the way of variety or strategic depth, and in very short order it becomes routine, and then boring.

You begin the game with a single pirate on a small island with a tavern and a dock, and a tiny, one-man pinnace. You must embark upon quests to earn random items that you can equip to improve your stats, as well as the gold you’ll need to pay for your island’s growth. Most quests are just randomized sojourns on an island or across the sea, but you’ll also fairly regularly encounter “story quests” that advance the plot – such as it is.

Quests are selected one at a time from a list of four or five, after which your “crew” – which is just you to start, but grows to include other pirates as you progress through the game – sets out on their ship to take it on. A tiny, 2D side view of the ship sailing over the waves then stretches across the bottom of the screen, and as the vessel moves from left to right it’ll pick up a few treasure chests which usually, but not always, have an item in them, and run into a wide assortment of enemies who must be dispatched in turn-based battles. The battles unfold automatically, also in a manner very reminiscent of Kairosoft; you can change your crew’s equipment before the fight starts and, once you have more than one pirate on your side, arrange them in more effective tactical postures – swordsmen in the front, gunners in the back kind of thing – but when the shooting and stabbing begins (depicted in completely bloodless fashion, by the way, so it’s fine for small kids)  it’s out of your hands.

An indicator at the bottom of the screen tracks your fame, which grows with successful quests, and every time it hits a certain plateau a new pirate will join your crew and you’ll be granted a larger ship and access to upgrades for your island like new buildings, decorations and events. Your pirates visit those buildings on an infrequent but regular schedule, slightly upgrading their abilities every time they do, which allows them to grow even when they’re not taking on missions.

But access to upgrades comes very slowly and once placed, buildings aren’t upgradeable, so the “management” aspect is really nothing more than choosing where you want them to go. Events are even more of a letdown: They sound like fun, with names like Feed A Shark Day or Wooden Leg Skate Contest, and each offers a specific boost to your pirates’ stats. But when you select one, the gold it costs to hold the event disappears from your total, the stats go up, and that’s it – there’s no visual payoff or any kind of “fun” reward. Events are, quite literally, complete non-events. 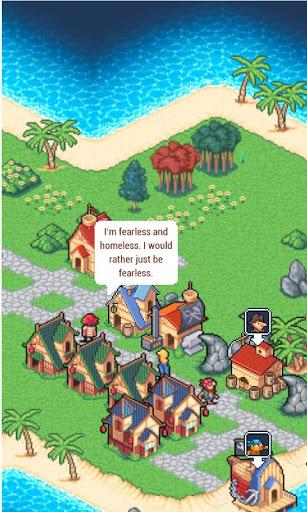 The difficulty curve seems a bit off, too. Epic Pirates Story is very easy to start but once you’ve got two or three pirates working for you, defeat will suddenly start to come quickly and often. Yet if you wait awhile to let your abilities improve a bit or advance the plot through a story quest (assuming you don’t run into a wall with that too), a mission you were hopelessly stuck on will just as suddenly be a breeze. I suppose it’s possible that some randomized element is giving me a hard time but it seems like such a wild swing from “extremely difficult” to “extremely easy” that I’m pretty sure there has to be more going on than just spots of bad luck. The good news is that when you do lose, there’s virtually no penalty for it; just wait for your crew to go home and catch some sleep, and then try again.

I wanted to like Epic Pirates Story, but in the end there just wasn’t enough to hold my attention. It’s cute and it has some nice touches, like the blond-haired pirate named Treep G. Woodbrush and the quotes that pop up now and then in conversation bubbles, but it misses on too many basic elements of gameplay to really be interesting.