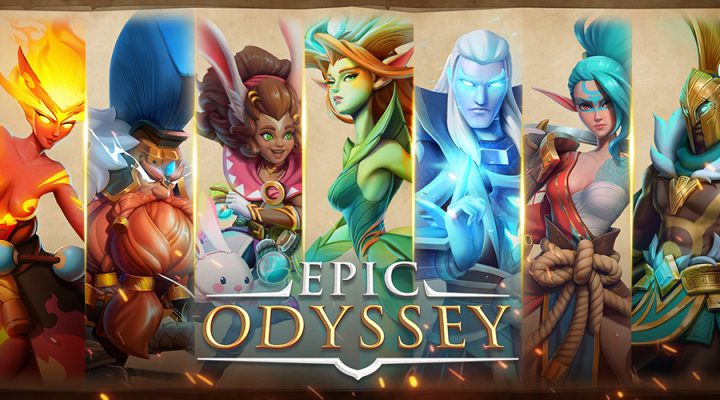 Limited number of heroes and classes

Epic Odyssey wants to be your friend. While many of its gacha-RPG peers seem to be trying to overwhelm you with countless stats and items and rosters of heroes running into the hundreds, Epic Odyssey is all about accessibility.

There are just 36 heroes in the entire game, and only three classes – though there are three factions, too, adding up to a very manageable nine possible combinations in total.

Epic Odyssey doesn’t want to give you a hard time in combat, so all of the combat is automated. You just have to assemble a team and the game does the rest, allowing you to watch the fight at X2 speed for added convenience.

Plus, it comes with idle features, so you don’t even have to do anything to accumulate loot and XP. Epic Odyssey likes to keep grind to a minimum.

If you’re the sort of dedicated gacha-RPG player who can recite the summon rate of pi to 10,000 digits you might want to skip this one. But for everyone else it’s an ideal palate cleanser, and a great introduction to the genre.

Epic Odyssey’s single player campaign is densely plotted and full of (easily skippable) dialogue. It sees you exploring a series of environments, with the first few chapters alone taking place in a village, a castle ruins, a cave, and a desert.

It all looks very polished, with bold 3D visuals, high fantasy character design, and tons of graphical details such as dancing fires, shadows, and that sort of thing. The world really pops.

Every chapter involves looting chests and getting into fights, while fetch quests and puzzles make an appearance from time to time as well.

Fights are triggered whenever you run into an enemy, and they’re generally over in a flash, in your favor or otherwise. Either way, once a battle is over the game gives you the option of editing your formation right there and then for another attempt.

Each campaign battle is 5v5, giving you a 2+3 formation to play with. As ever, the aim is simply to put vulnerable, ranged attackers at the back and line up your butch close-quarters bruisers on the front row.

While Epic Odyssey doesn’t feature the complex elemental affinity-based combat relationships found in many strategy-RPGs, there are definitely deeper factors to consider than simple layout. For instance, you can get buffs for using three heroes of the same class and faction.

Once you’ve got into a fight with an enemy, that enemy’s level is displayed above its head. Armed with this information, you need to make a judgement about whether it’s worth engaging given your current level. Sometimes you’ll hit a wall, with no available enemies weak enough to kill.

When this happens, you’ve got a few options. Firstly, you can get on top of your character management, levelling up your heroes, equipping the best gear, and levelling that up too.

Fortunately, this is all painless. Equipping the right gear is a simple question of visiting a hero’s profile and tapping ‘Auto Equip’ if there’s a notification.

Once a character is levelled up to the max, you can ascend them by sacrificing certain other characters, and you can do more or less the same thing with gear. To refine a gear item, you need to sacrifice other gear, as well as spending Gold.

In typical gacha-RPG style, Epic Odyssey acquires new areas as you level-up. Once again emphasising the game’s fundamental accessibility, all of these features are fully available by the time you reach chapter 8, which shouldn’t take you more than an hour or two of concerted play.

There are 16 areas in total, including the usual selection of Clan area, Arena, Summoning Gate, Tower, and so on. There are also a couple of idle features – the Great Hall, which keeps producing loot for you to collect whenever you like, and Mission Board, which allows you to dispatch heroes to complete missions in pairs in the background.

Our favorite, however, is the Pentagram. This ingenious feature lets you turn five of your heroes into Followers, which has the effect of boosting their levels to 40 so that they can hold their own in battle without having to be painstakingly cultivated.

You can’t level-up a follower any further, but if you discover through the Pentagram system that a particular hero type has promise, you can get to work on building one up properly. The Pentagram is basically an audition process, allowing you to identify targets for promotion.

It’s a brilliant addition, and typical of Epic Odyssey’s user-friendly approach. Gacha games can be overwhelming for beginners, but there’s no such danger here. If you’re looking for a warm and sunny RPG to fill the remaining summer months, Epic Odyssey is worth a download. It’s available via the App Store and Google Play.