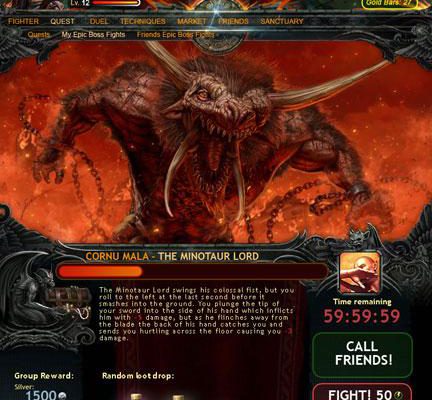 Epic Fighters is one of those rare games that remind you of those first dark moments when you first happened upon one of the old Advanced Dungeons and Dragons manuals, hypnotically compelled to peep inside. There was something pleasingly dirty about the encounter, such that you may have found yourself looking around for anyone watching, and something undeniably awesome. Thankfully, Epic Fighters never really lets go of this nerdly rush once it kindles it, and quickly establishes itself as one of the more memorable Facebook RPGs.

Sure, we’ve seen text-based games like this before in Castle Age and Mafia Wars, but Epic Fighter’s lavish dark fantasy visuals and decent storyline keep it from becoming just another text-based outing rehashing the same tired formula. This is a game that knows its targeted audience well, down to the unreserved use of the signature font from the God of War series to the bulky Frazetta-inspired knights draped in shadows with flaming swords. In other words, this is Castle Age for the Conan crowd, and in this regard it’s a much more rewarding visual experience. 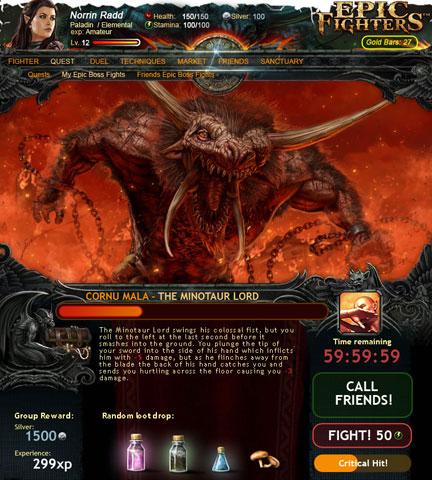 As for the story, it pits you as a human, forest elf, dark elf, or undead warrior seeking to overthrow the wicked king ThoraKalyptica, ruler of the land of Amaranth, all while providing enough typographical errors to serve as a cool fantasy-themed training exercise for novice editors. You can make minor cosmetic changes to your epic warriors by adding tattoos or a different hairstyle at the start, and you can choose from melee and magic specializations that will aid you in the coming battles. As you level through the rather typical text-based quests, you’ll have a chance to put points into energy (which affects how many actions you can perform in combat), health (HP in battle), or stamina (known as energy in most other social games).

Thankfully, relatively fast regeneration rates for both health and stamina ensure that Epic Fighters doesn’t require the epic waits that plague similar games. Hello again, Castle Age. Energy points regenerate at one point per 45 seconds, and health regenerates at 10 points every minute. Since the game also freely tosses around virtual currency, you’ll have plenty of cash to buy upgrades for your spells and abilities as your fighter grows even more epic. All of this is accomplished at precisely the right speed for maintaining the game’s fun level and for sneaking in a few rounds of epic fighting in your office browser throughout the day. 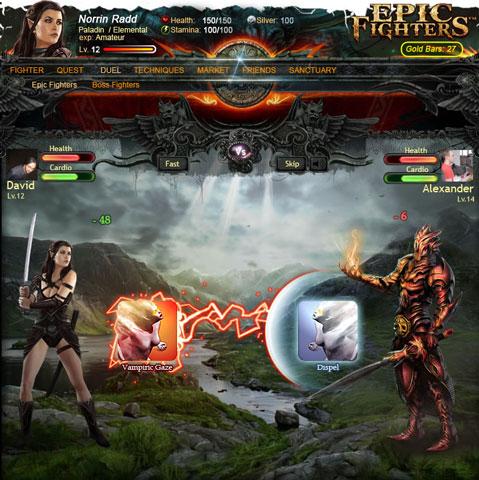 Sadly, “epic” doesn’t quite describe the fighting, aside from some glorious background visuals. While clicking merrily along on the text-based quests, you occasionally be pulled into a battle mode that pits you against an enemy NPC. This is always automated, and left to its own devices, it simply throws your class abilities and defenses against your opponents. Later in the game, however, you’ll have a chance to liven up the action assign priorities to certain abilities to gain an edge over your opponents, although you’ll hate not being able to change a tactic in mid battle. Defense also plays a key role, especially since you can learn the abilities of other classes for a significantly higher fee. All abilities have offensive and defensive counterparts, so if you focus on learning your class’ main offensive abilities while learning how to guard against the attacks of other classes, you’ll be surprised at how untouchable you’ll become in combat.

Fighting other players follows the same formula, although you’ll have a chance to check out their basic stats and level before you attack them. You’ll also have a chance to change your attack priorities if needed, and if your opponent is one of your Facebook friends, you can taunt them with a wall post after you win a battle.

There’s a curious side effect to player combat, though, in that whatever health you had left after the battle is what you’ll have when you go back to the main menus. This is fine, but the health is also the same if you come across one of the random combatants while clicking through the text quests. If you just barely survived a scrape with another player, in other words, you may run into a goblin or some other unworthy creature that will finish you off in one hit.

So much for epic fighters. This, too, wouldn’t be so much of a problem if the NPC battles were handled in the same way. If you survive a random battle with an NPC (aside from the epic boss battles), you’ll come back to the regular game with full health. So much for consistency. The aforementioned epic boss battles deserve their name, however, as they place you opposite foes with health bars that will take you whole days to take down on your own. Here’s where your friends come in. By helping a friend beat down their epic boss, you’ll both receive rewards and experience, and if you succeed in downing the boss, you’ll gain a helpful NPC for bringing down the next boss. 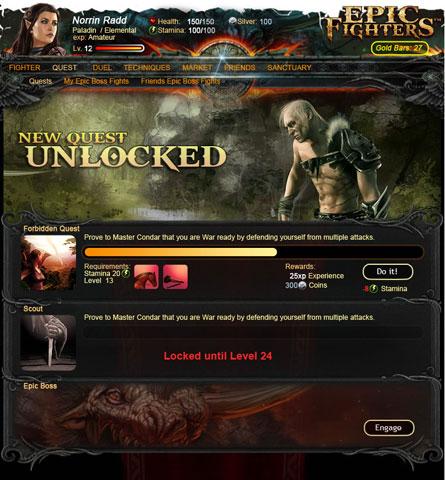 There’s no question that Epic Fighters is fun, even if it does follow the same formula as so many other text-based RPGs on Facebook. The art style, again, is relentlessly magnificent and goes a long way toward making the game stand out among so many similar competitors. If Epic Fighters is missing any one great thing, though, it’s music. Unless I’m hopelessly blind (and deaf, for that matter), there’s no switch to turn on appropriately epic music and Epic Fighters is thus as silent as a forgotten tomb. A game as visually gorgeous as this simply screams for epic music, and its absence is more than regrettable. Elsewhere, gear options are somewhat limited, and while the game tells you the level at which you can acquire a new weapon, it doesn’t tell you if you’ll be able to purchase it with virtual currency or real cash. 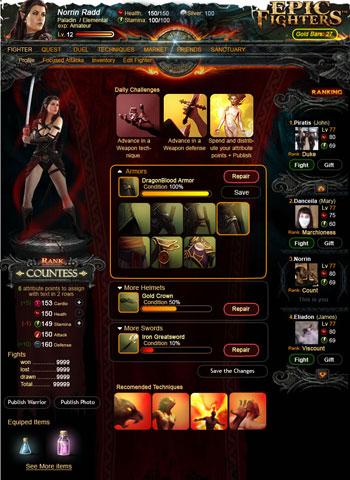 In short, Epic Fighters could have been a lot more than it is, but what we have isn’t bad at all thanks to the pacing and the rather brilliant use of its hardcore fantasy ambiance. While it’s difficult to gauge its potential to keep new players since it quickly falls into a perhaps unavoidable routine, Epic Fighters also presents some design and playstyle lessons that other companies would do well to learn from. Its shortcomings are few, and with a bit more gear choices and a bit of music, Epic Fighters could well become the Facebook game that comes closest to bringing those old Advanced D&D sessions to life.