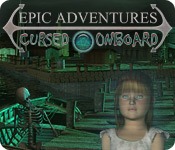 Investigator Melissa Alan travels to the Amazon jungle to look for clues regarding a lost ship.

Epic Adventures: Cursed Onboard claims to be both epic and an adventure but fails on both counts. Milking the Jules Verne story concept behind its previous title La Jangada, developer Urchin Games presents us with the Garral family who cruised up the Amazon in the 1970s and disappeared. You play Melissa Alan, a present-day investigator looking into this “mystery.” Sadly, what you find is a string of uninspired hidden object sequences with little to hold them together.

Of course, you don’t know this at first because the game starts out with at least some measure of promise. The story concept’s fairly interesting and when you receive the phone call from the shadowy media tycoon requesting you head for the Amazon, you might be rubbing your hands together in anticipation of a good, meaty mystery. The main character’s voice acting is adequate and the first creepy image of a child’s doll with a knife stabbed through it promises to reveal sinister, possibly dangerous forces behind the family’s disappearance. Then you hit the first hidden object scene and from then on, the game’s rising interest goes into a tailspin.

Considering the awkwardness of the game’s title, perhaps the game’s subsequent failures shouldn’t be that much of a surprise. The development company is based in Pakistan and apparently failed to find a good translator. The result is that many translation issues crop up, making hidden object sequences exercises in frustration. Who would know that when told to look for “needles” they should look for clock hands, or when told to seek out “ear tops” they should look for earrings? What’s worst about this is that with few traditional puzzles and little narrative, the game becomes roughly ninety percent hidden object sequences.

Repeatedly, you’re asked to look at the same handful of hidden object scenes, which wouldn’t be all that bad if they were at least nice to look at. Epic Adventures: Cursed Onboard though, adopts an ahem… economical approach to art direction, utilizing boring, bland 3D art for most of the game world and equally uninspired objects for its hidden object scenes. Eventually, you’ll groan every time you see the tell-tale sparkles over the same pile of dockside rubbish and will likely be very tempted to make over-frequent use of the game’s Hint button. If only the game’s problems ended there.

What few puzzles there are either force you to find tedious codes by trying every possible number combination or set you on the road to carpal tunnel with cumbersome, unresponsive controls. Further, when you find objects for use in the environment, they’re often taken immediately away from you post-use, forcing you to endure yet another hidden object sequence to replace them. Occasionally, all this repetitiveness is relieved by a brief voice over from the main character but it’s not enough to prevent the whole experience from feeling like nothing more than a toilsome march to the next hidden object scene. Adding insult to injury, the story quickly becomes an afterthought and if that’s not bad enough, the game’s climactic ending is completely non-interactive.

Though Urchin Games may have enjoyed some success with its other Jangada-centric game, with Epic Adventures: Cursed Onboard it profoundly disappoints. The game’s combination of ho-hum art direction, muddled, hastily-forgotten storyline and lazily-designed gameplay make it merely another drop in the seemingly endless ocean of mediocre hidden object titles out there. When presented with this “epic adventure,” hidden object fans should do themselves a favor and hit the “skip” button.