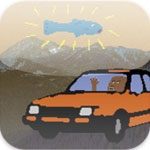 The thought of running into a starving grizzly bear in the deep forest right before the icy chill of winter sets is pretty nerve-wracking. Some might suggest it’s best to stay put and play dead when in such a scary situation; others say it’s better to extend your arms and act intimidating. But what on earth are you meant to do when the bear comes charging out of the bushes driving a beat-up jalopy?
Enviro-Bear 2010 – Operation: Hibernation is indeed a silly game through and through. That’s what makes it so endearing. You play as an emaciated bear that’s inexplicably sitting behind the wheel of a car in the middle of the forest. Winter is only scant moments away from dropping a freezing white blanket across the mountaintop, and you only have precious minutes to fill your belly with sustenance and burn rubber to the nearest cave to hibernate. It’s a fast and frantic scramble that’ll leave you chuckling.
To acquire berries and fish to eat you must plow into trees, bushes, and rivers to knock food into your vehicle. Once the edibles are bouncing around inside the cab, you have to grab them with an available paw and bring then to your mouth. Filling your girthy gut to its fullest means it’s time to hibernate, though getting to your extended napping destination is a chore on its own. It turns out driving a car isn’t so easy, especially when you’re a bear.
The challenge and inevitable humor of the situation comes from only have one free paw to work with. Maneuvering the automobile requires you to shift into drive or reverse, manually push down the gas and break pedals, and grab and turn the steering wheel. The touch controls work well but the whole process is intentionally designed to be unnecessarily tricky and cumbersome. Also, food isn’t the only stuff that falls into your vehicle. Stinging bees, angry badgers, and miscellaneous items find their way in too. You can try to ignore the chaos or spend precious time flinging things out the sun roof. It’s a gamble either way, since these items and critters may lodge themselves in precarious spots that make driving impossible.
Later levels throw additional wrenches into your plans for a big dinner and a nice long nap. Other bears are also driving around the woods crazily with the same hunger-driven goal in mind. They don’t heed the laws of the road, as is evident by the fact they’re driving around in the forest at random in the first place, and will plow into you or ram you into a tight spot without even blinking. Some levels give you a turbo engine, change up the time you have to finish your snack and reach the cave, throw ice on the ground to make traveling slippery, and add random twists.
Enviro-Bear‘s MS Paint-style graphics are charmingly low-tech but surprisingly elaborate in motion. The animations and sound effects also give the driving bear a lot of personality – he grows fatter as he eats, growls when stung by bees, chews hungrily, and exhibits other amusing behavioral traits. If you’re looking for something a little stranger than usual, this highly entertaining indie iPhone pick will certainly pique your interest and hold your attention.