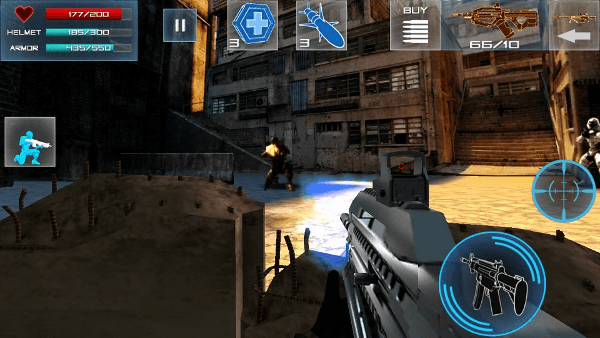 At first glance Enemy Strike resembles one of the billions of first-person shooter games available on the market today, but once you get past the gloss and dig into the gameplay, you’ll find that it actually has more in common with the arcade classic Time Crisis than it does with Halo. Well, except for the “classic” part.

The world’s gone all to hell, and the one thing that can stop a sinister force of alien brutes from snuffing out mankind’s few remaining survivors is you – the battle hardened bad-ass in the spiffy combat armor. So begins Enemy Strike, the single-screen shoot ’em up from Killer Bean Studios. If that opening sounds familiar, it should. It’s literally been used by legions of games far more ambitious than this one.

Enemy Strike‘s tutorial mission begins with our nameless hero waking up in the middle of a post apocalyptic battlefield to the disembodied voice of an officer screaming instructions in his ear. You’re immediately forced to use one of your three (expensive) medical kits to regain health, and soon afterwards you’re using a virtual pad on the left side of your screen and a virtual trigger on the right side to blast alien baddies that are rushing your position. Rushing your stationary position, rather, as your character is permanently glued to one spot. You’re quickly told to push a button on the top of the screen to “buy more ammo”.  And with that, you get the sickening feeling that you’re being fleeced from the start. After spotting a sniper in the distance, you’re introduced to the few interesting mechanics in the game – pressing the crouch button for cover and pressing the zoom button for headshot attempts. Once you take out the sniper, a heavy tank comes lumbering in your general direction. Your precious bullets prove useless against its armor, and you’re told to press the air-strike button. Once you do, the tank explodes. End scene.

Unfortunately there really isn’t much more to the game. Levels consists of the same five mission types seemingly repeating ad infinitum: Eliminate (your standard shoot ’em all), Defend (keep alien solders from getting past your position), Target Snipers (take out rooftop snipers while being assaulted by various alien forces) Survive (hold out until your bombers arrive), and Boss Attack (take out various bosses ranging from well-armored generals to artillery before they bring an end to your campaign). You level up as you play, and as you level you’re allowed to purchase new weapons, armor, and equipment. You’ll need these to advance to the later levels because the difficulty skyrockets shortly after the beginning missions, but of course these upgrades come at a high price (much like your dignity, should you choose to opt out of this monetization nightmare). The in-game currencies, cash and gold, can be earned as you progress, but not quickly enough or in large enough quantity to make a difference in the later missions. You’re also charged to repair your equipment (like in the MUDs and MUSHes of long ago) and for upgrades like infinite ammo and instant reload. The most useful of these items take away from your artificially limited gold supply, which is supposed to get you to spend real money on fake currency, or at the very least try out a few affiliate marketing schemes.

On the upside, the environments are rather nice. The various future cityscapes you wage war in are lovingly rendered, even if they’re a bit on the generic side. The same can be said for the attacking aliens, though they’ve been through more palette swaps than a Mortal Kombat 2 character. That said, I did enjoy the artillery designs. 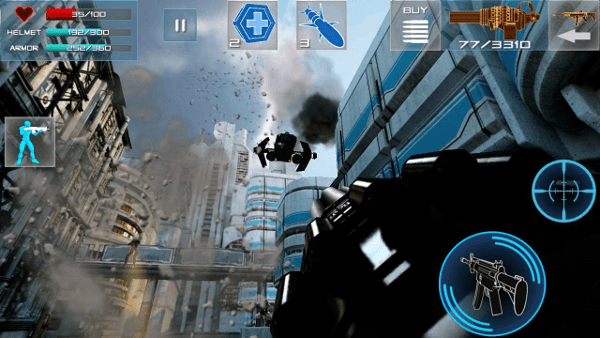 The sound design fares a bit worse here. The sound effects are merely decent. The music does its job and is appropriately epic, but there just isn’t enough of it. The voices are ridiculous, though. The alien battle cries resemble a grizzly bear attempting to speak Mandarin Chinese, and the guy hurling orders at you sounds like one of Frisky Dingo’s Xtacles.

There really isn’t a compelling enough reason to waste time with this one. It felt more like a chore than a game. I like shooters as much as the next guy, but I can’t recommend this one. Not only is it brainless, but it’s also generic and lacking in ambition. Three strikes and you’re out.