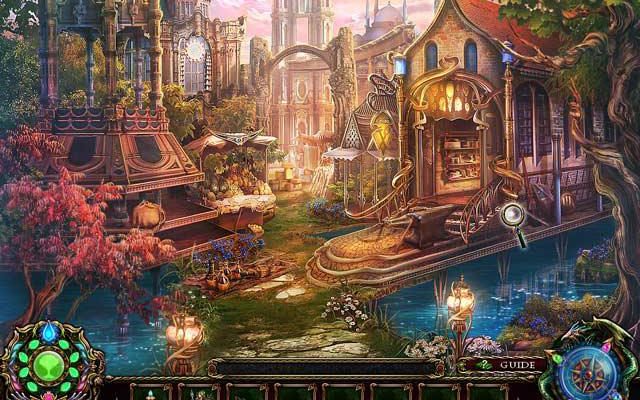 It’s been 500 years since the Phoenix Queen was called to the realm of Enchantia to do her thing – and her thing just so happens to be scorching the land with fire, eradicating all life in the blink of an eye. According to her it’s a righteous duty, but those whose lives are in danger are of a slightly different opinion.

Enchantia: Wrath of the Phoenix Queen opens with a grand vision of the Queen’s powers, then quickly snaps you out of the bad dream into reality. Reality isn’t so boring, it seems, as after fiddling around with an ancient Elvish shrine you discover the Queen has escaped her prison and is hunting for a relic that will restore her to full power. That would be bad for everyone in Enchantia, so your mentor sends you out to put a stop to it. 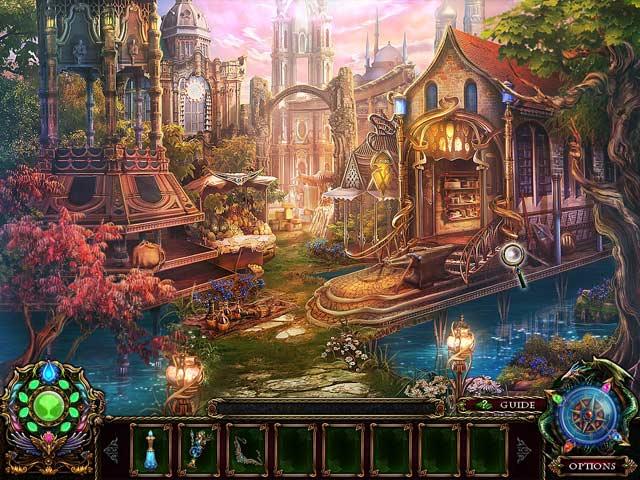 Enchantia is a beautiful adventure game filled with puzzles, hidden object scenes, creative mini-games, and some seriously epic cinematics. It takes the high fantasy road and spins a tale of ancient powers and modern heroes, one that would feel right at home in a piece of Lord of the Rings fan fiction.

Enchantia puts you right in front of the action by doing something many hidden object games omit: showing your character’s arms. It may sound like a small touch, but throughout the game you’ll see a pair of arms reach out from the screen as if they were your own. It makes everything seem a little closer and a lot more intriguing.

Hidden object scenes are evenly paced and feature a sectioned menu bar at the bottom of the screen littered with pieces of items to find. The environments are so crowded with intricately detailed art that it can be difficult to pick out, say, a horseshoe-shaped piece of golden metal with a jewel in it amongst the horseshoe-shaped pieces of golden metal on the screen. It’s not unfairly done, and we would be the last ones to complain about a game being too visually detailed. Just know that the first several HOG scenes you encounter will be a bit of a struggle. But don’t worry – it gets easier the longer you play. 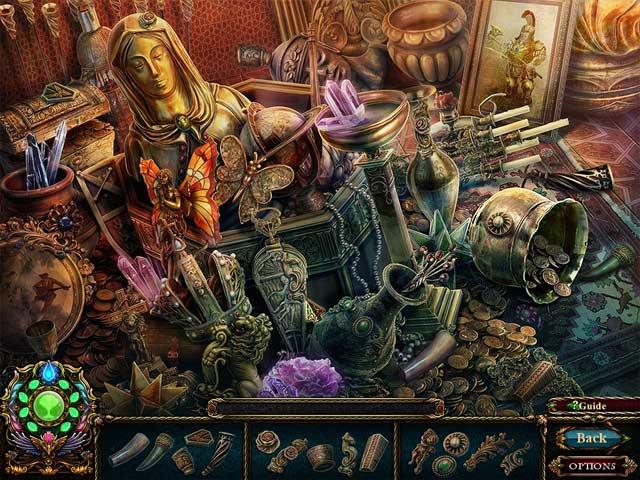 Mini-games in Enchantia are something special. Playing on the whole ancient and mysterious fantasy theme, expect to encounter complex-looking pieces of machinery that are powered by a mix of magic and ingenuity. They’re built around simple concepts layered on top of each other, never becoming too complicated to be understood but still providing a good challenge. Even if you’re not feeling the mini-game love you can always skip it and continue with the story. No one’s going to be mad.

There’s a lot of bonus content in the collector’s edition of Enchantia: Wrath of the Phoenix Queen, including wallpapers, additional puzzles, character profiles, music and artwork. There’s even an entirely new chapter titled The Skybird Kingdom that dives into the 500 year history of the main characters and how they dealt with the Phoenix Queen long ago.

It’s a rare thing to say this about a casual adventure game, but this one has certainly earned it: Enchantia is practically flawless. It has an interesting story filled with drama and suspense, the graphics match the intensity of the world you stand in, and the gameplay runs right along at a steady speed, never pausing for lack of variety or obtuse logic. You’ll be hard-pressed to find many games on par with Enchantia, especially ones that dazzle you with an ancient and evil queen so talented at burning things.