Enchanted Katya and the Mystery of the Lost Wizard Review 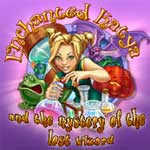 Enchanted Katya and the Mystery of the Lost Wizard is technically a time management and hidden object blend, although you’ll find far more time management than hidden object tasks. When a famous wizard goes missing, his loyal student Katya takes over his potion shop. Can you help her solve the mystery of her mentor’s disappearance?

In Enchanted Katya and the Mystery of the Lost Wizard, you’re running a magical potion shop, similar to Mystic Inn. Your customer arrives at the front desk, and needs to be handed a menu. Once s/he has decided on a potion, you’ll see an image of it on the counter. Your job is to create the potion ordered. First, choose the correct bottle. Then, fill it with fluid by placing it on the portal pedestal. If the customer requests a mystical rune, you need to place the potion on the rune dispenser and wait for it to be added.

A customer might also request an item to be added to the brew, such as a frog. This is a bit of a pain, since you must click the item before picking up your potion from the rune station. If you pick up the potion first, you have to get rid of it and start over, since you cannot add the item.

If you’re running out of work space, you can set a potion aside by sitting it on the mushroom-shaped display case by the window. Made a mistake? You can toss an incorrect potion to the pumpkin in the left hand corner, and he’ll eat it… but you lose cash by doing this. Once a potion is complete, you can bring it to the customer, and collect coins off the counter. As always, customers have limited patience, so you need to work quickly.

There are 14 different characters to serve, each with their own funny biographies and personality quirks. The cast of magical beings is downright eclectic, including opera singers, sprites, mobsters, kids, vampires, witches, magicians, aliens, centaurs, professors, and genies.

Occasionally, a hidden object mini-game will appear. A character you are serving might ask for a special item, and you’ll find yourself teleported to the storage room. From there, you are shown a picture of a few items, and must find those items on the screen. You get three hints. These hidden object interludes are very easy and short. They break the game speed, since they come out of nowhere and interrupt the time management flow. The round ends when you complete one, even if it was midway through the round when you were teleported out.

In between levels, you can shop for upgrade goodies. These include more bottle and potion types, as well as upgrades that increase Katya’s speed and the customers’ patience. As you accomplish different tasks in the game, your shop is also decorated outside.

In the game’s favor, the visuals are extremely nice, well drawn 2D. All of the characters are fully animated, right down to Katya’s hair flips, and sparkles on the opera singer’s dress. The music is suitably atmospheric and fun, without being very noticeable. You are barely aware of it in the background. There are a fair number of sound effects, too.

Unfortunately, there are a lot of rough patches that hinder enjoyment of the game. I did spot a few bugs. If you are playing the tutorial, and you grab a potion bottle before the customer comes in, Katya freezes and won’t budge. The English can also be a bit awkward in spots. It’s nothing major, but if you’re a stickler for grammar, than you’ll probably notice it.

You can’t really cue up actions because of the way the game is laid out, which means you can’t plan out things in advance. There are no combos. This is a real drawback, making it less about strategy and more about following instructions. You also can’t replay levels, which of course limits replay value. Supposedly, you can earn an expert score, but I never seemed to figure out how, since I only noticed the standard goals.

It’s easy to make mistakes when trying to serve two or more customers at a time. For example, if you pick up a plain potion to serve a customer, and then go to pick up a rune potion for a second customer, it will automatically swap the two, leaving you with two rune potions instead of 1 plain one. This quirk forces you to do only one task at a time.

I got the feeling that the game developers used language as little as possible. Instructions are glib or absent, and so is the story. Quite often, you need to figure things out for yourself. It’s kind of like dealing with a mime.

It’s similar to Cake Mania, in the sense that you assemble items for customers. However, Enchanted Katya and the Mystery of the Lost Wizard is a much simpler game, without the benefit of combos and other features that extend the game play. This, combined with the various quirks mentioned above, make it hard to recommend unless you’re a diehard fan of the genre.