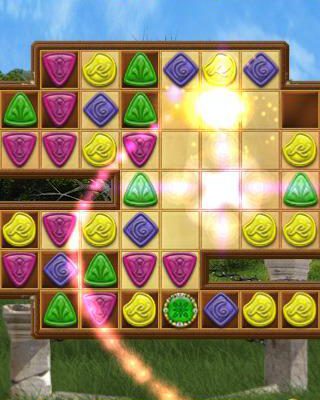 Enchanted Cavern Review: Less enchanted than you might think

It’s got to be tough, putting together a quality match-three game for the iPhone. It seems that, in order to stand out from the pack, you have to put together a title that is either great or terrible… though only one of these options really has any potential for strong sales. If you create something that is, well, mediocre or just “good”, the app is likely to get lost in the crowd. Unfortunately, the iPhone port of the PC game Enchanted Cavern isn’t able to differentiate itself or do things well enough to be considered much better than its competition.

The story, as it is, states that you walk into a cavern lined with glittering jewels. Further exploration will clearly result in a fabulous treasure of untold riches, but you’ll need to collect special crystals in order to do so. Adding insult to injury, the plot is introduced via a painfully low-budget cut scene.

Gameplay takes place on a grid from which you have to remove jewels in order to fill up a progress bar at the bottom of the screen. To do this you’ll have to click on three or more matching gems that happen to be grouped together. Later on, the usual assortment of power-ups come into play. It’s nothing new, but it is well-executed. 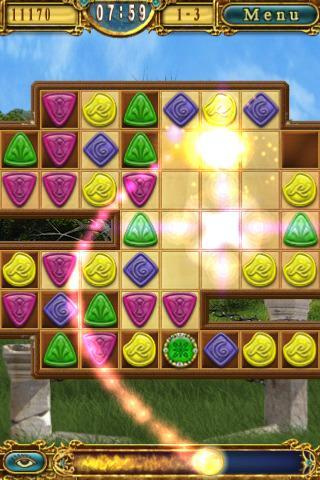 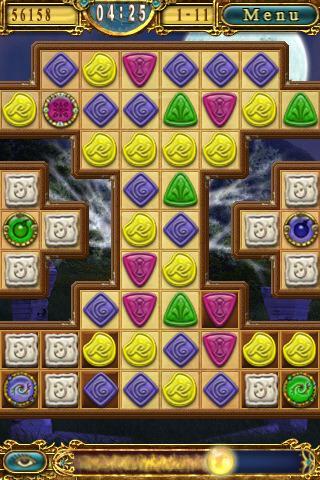 The first few levels are enough to make any player give up on Enchanted Cavern. The gameplay is pretty unremarkable and overly easy. The first half hour or so will see players breezing through the levels with top times and rankings, but elements introduced after this point makes the game rather challenging. The problem is that, up to this point, there’s no real strategy involved in each level.

Strategy does become important later on, though, thanks to things like locked, frozen, and “monolith” blocks, as well as blocks are actually placed outside the level’s grid (meaning you have to devise a way to take them out without directly doing so).

Visually Enchanted Cavern isn’t going to wow you, but it isn’t going to make you cringe either. The graphics are reasonable for a puzzle game, with bright colors and cartoony stylings, though the cut scenes themselves are a bit on the ugly side. The soundtrack is particularly disconcerting, though, because it’s often weirdly epic and feels remarkably out of place in a match-three game.

Aside from rather unremarkable graphics and strange audio choices, the game has some problems with language. A noticeable example of this was when I first solved enough of the match-three puzzles to unlock a crystal and was then congratulated on having “founded” the gem.

If you’ve exhausted your supply of match-three games on your iPhone, you could certainly do worse than to add Enchanted Cavern to your app library. Sure, it doesn’t have the best story or production values, but those are all of secondary importance when it comes to this type of game. We play match-three games because we’re looking for something that is both fun and addictive. While this isn’t the most remarkable title out there, it becomes fun to play if you can slog through a particularly dull first half hour. Just make sure you mute your phone if you want to want to make it that far.