Home / Reviews / Empress of the Deep: The Darkest Secret Review

Empress of the Deep: The Darkest Secret Review 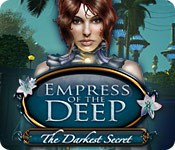 Empress of the Deep: The Darkest Secret

Deceit. Betrayal. Madness. A mystical empire in the grip of a tyrant. This is the backdrop for Empress of the Deep: The Darkest Secret, the tale of a mysterious woman named Anna who awakens from a coma trapped alone inside a sprawling undersea temple, with no memory of why she’s there or how to escape.

The game opens inside a beautiful, regal undersea mausoleum, with a polished, mirror-like floor, ornately carved walls and towering columns. But mixed with the beauty is a more troublesome sight: Sharing the room with Anna are three crumbling skeletons dressed in royal finery, fitting for a mausoleum, perhaps, but also a disturbing hint that not all is well in this paradise.

Anna is roused from her long slumber by the disembodied voice of an unknown benefactor, urging her to action. It’s time to rise, he tells her; the time to save her people is at hand. But who her people are, or what she’s meant to save them from – or even how she’ll do it – remain a secret. The puzzle that unseals the room is a simple one, and then the the game begins in earnest.

The combination of wonder and dread established by the opening scene sets a tone that will remain strong throughout the course of the game. Anna’s adventure takes place in the Ark of Humanity, of which the mausoleum is just one small part, a wondrous, magical place that is slowly falling victim to the ravages of time. The solitary, vaguely spooky atmosphere in Empress of the Deep is enhanced by the game’s audio, which forgoes conventional music in favor of ambient sounds and soft, flowing choral tracks, simultaneously soothing and foreboding.

Unlike some “hidden object adventures,” Empress of the Deep is fairly light on the non-HOG puzzles. Most of the standards are covered, occasionally with a slight twist – the obligatory Towers of Hanoi puzzle, for instance, is presented from a top-down perspective – and while the majority of them are fairly conventional, they’re all quite well presented and a few stand out as particularly good.

But hidden object searches are why we’re here, and in that regard the game acquits itself very well. Hand-drawn locations ranging from great underwater art galleries to the shadowy, lightning-blasted Vault of War are rendered in impressive detail, hiding their objects without unfairly burying them. All the objects are discoverable with just a little persistence and with only ten items to be found in each location, the action tends to move along fairly quickly.

The game’s various puzzles reveal items or hints that will be helpful elsewhere in the game, ranging from the obvious, such as a screwdriver to unbolt a plate from the wall, to seemingly random patterns and sequences of numbers which will naturally prove vital at some later point. It may feel a little overwhelming at first, but the pacing is such that the inventory never has a chance to get cluttered, and if you miss any of the special objects that are scattered throughout the Ark, the in-game map is very helpful in tracking them down.

In fact, some fans of the genre might find Empress of the Deep a little too easygoing. The object searches and other puzzles tend to be quite easy and the help system, on those rare occasions when it’s necessary, simply points out stubbornly elusive objects and is ready to go again after only a few seconds of recharge. There are no bonuses for performing well or penalties for performing poorly, no score or ranks and no achievements awarded for reaching certain milestones. Gamers who enjoy tough challenges might be disappointed.

But what it lacks in difficulty, it more than makes up for with polish. The graphics, sound and attention to detail in this game absolutely shines, and the story is enough to draw players in and hold their attention from start to finish. While the settings vary dramatically from place to place within the Ark, the ambiance remains strong throughout. Players familiar with “core games” will probably pick up a strong sense of Myst and BioShock almost from the opening frame and it’s a pleasant surprise to see it live up to those high standards quite nicely.

The only real knock against Empress of the Deep is its length, or more to the point, its shortness. I blew through it in less than three hours; I am, it must be said, a veritable cybernetic ninja of hidden object games but even so, I was a little surprised at how quickly I was able to wrap things up. On the other hand, I’m not sure how critical of this I should be; the disappointment of a short, great game drawing to an end is preferential to 15 hours of average, repetitive gameplay any day.

And that’s a minor complaint next to the excellence of the overall game. Empress of the Deep: The Darkest Secret is one of the most entertaining hidden object games I’ve played in a long time. With a fantastic setting, engaging environments, fun puzzles and a dark twist, it’s a great choice for gamers looking for a relaxed experience with a bit of an edge to it. And short though it may be, the end of the game doesn’t necessary mean the end of the tale: Its promise of “To be continued” means one sequel that I’m definitely looking forward to.