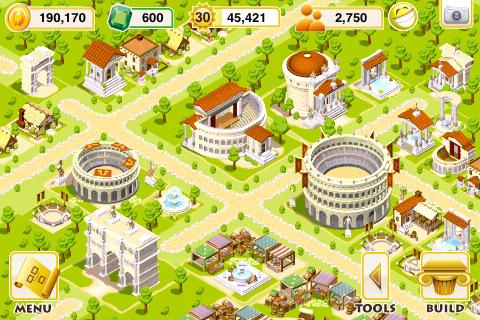 Empire Story is little more than a re-skinning of City Story, and not a very good one at that.

It seems like TeamLava has been on something of a hot streak lately, with City Story surpassing their previous effort Farm Story in quality, and then Restaurant Story even surpassing that. But no success story goes unmarred forever, and Empire Story appears to be the social developer’s first real dud.

Little more than a re-skin of City Story, Empire Story places players in control of their own Greco-Roman empire. Players will place orders for goods at markets instead of factories, build public buildings to raise happiness, and try to grow your population through residential properties. This is a road we’ve travelled before with TeamLava, and considering how little has changed, it’s downright insulting that they’re trying to pass this off as something original.

TeamLava is known for their great portable interpretations of popular Facebook formulas, but their take on empire-building has really missed the mark. This is a genre that tends to use city-building as a mere starting point, and yet that’s where Empire Story both starts and stops. The great Facebook games that served as its inspiration, like City of Wonder and My Empire, incorporate deeper gameplay mechanics like resource gathering and technology research. Empire Story has none of this. It’s a simple case of one tap construction and collection and little else.

Worse yet, even these elements reek of laziness. The same three or four images appear over and over when selecting which goods to manufacture, so whether you’re making leather belts, wool tunics, or leather sandals, expect them to appear as a toga in the menu. It’s a far cry from the outstanding variety of craftable items we’d seen just a few weeks ago in their most recent title, Restaurant Story.

At the very least, Empire Story manages to live up to the developer’s reputation for top notch graphics (by social standards) and sound. Buildings look unique, the music is charming, and the color palette is a perfect fit for the era it’s trying to capture. If there’s one thing we simply can’t fault, it’s how nicely everything is presented.

At best, Empire Story is a flawed reskinning of City Story with a Greco-Roman vibe. At worst, it’s an attempt to recreate the excitement and fun of Facebook empire-building that’s completely missed the point. It may be a free download, but even at that price it’s a pretty difficult offering to recommend.