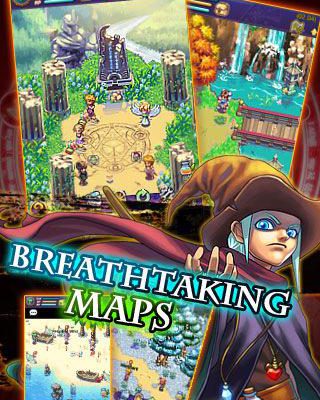 Empire Online isn’t without it’s fun, but it’s a little too cluttered to really be enjoyed

Empire Online is finally here, almost a month after it was released for Chinese audiences. After having spent a few days with the game, it seems safe to say that developer Lakoo might have wanted to take another month or two to work on this English port. It’s certainly a decent game, but the various limitations that consistently crop up prevent it from having much real appeal.

It takes a while to get used to the layout of the game. As opposed to most iOS titles, Empire Online requires the phone to be held vertically instead of horizontally. Not only that, but there’s a lot to take in on the screen, especially in the early portions of the game where the areas are practically overrun by new players.

The game’s graphics are certainly cute, though typical for an MMO on the iPhone. Everything is presented in a 2D top-down perspective with visuals that wouldn’t have been out of place on 16-Bit consoles. The colors are bright, the characters are cute, and the environments are charming. Character appearance is extremely limited at the beginning of the game; players can choose from four different styles, though the only noticeable difference is with the character’s hair style.

In fact, a few other things seem pretty limited with the English version of the game. There’s only one playable server to choose at the moment, which is probably why locations in the world seem so crowded. On top of that, character creation is pretty basic: four races are selectable (Eaastlander, Nordic, Atlantis, and Maya), and there are only a few classes to choose from. This is a little weird to deal with, since half of the races only have one class available, as opposed to the two classes available for other races. 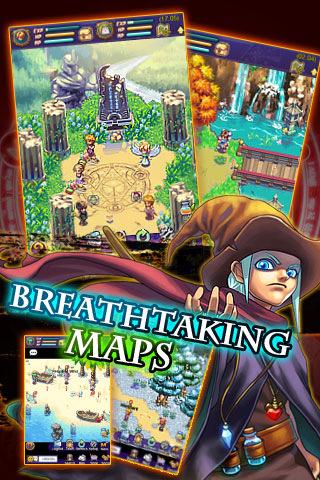 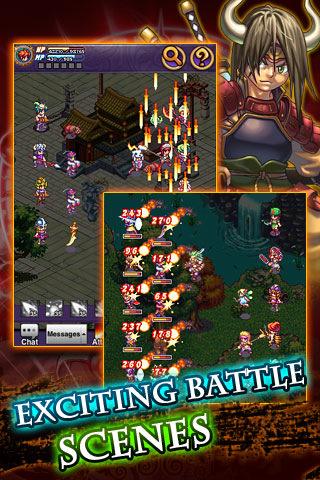 The action on the screen provides what is probably the biggest challenge with the game’s interface: there’s often too much going on to make it easy to move a character accurately. The game requires players to tap on the area of the map they want to move to, which is easier said than done. Selecting a character to talk to or an enemy to attack is more than a little difficult because the targets are so small on the screen. In a couple of cases, characters/creatures who have to be interacted with for a quest are blocked from view by the crowds of players.

Since this is an MMO, players can talk to each other and are notified of world events via a dialogue box. Unfortunately, when the text is on display it overlays about a third of the screen, which only makes things even more confusing. Players can also form or join empires and engage in PvP combat, though it takes a while to learn about all these features since in-game instructions are a bit lacking and feature some translation problems.

Combat, meanwhile, is easier to deal with. Once an enemy is engaged, players find themselves in a turn-based battle that will feel instantly familiar to anyone who’s played a JRPG. Players can perform one action (attack, cast a spell, use an item, etc.) a turn. It’s standard and relatively fast-paced, and it requires a bit of strategy once a player has levelled up a bit and enemies provide a substantial challenge.

This is a free-to-play MMO, which means that it relies on microtransactions to generate cash. These come from purchasing silver coins, which can in turn be used to acquire specialized goods in the game’s store. Of course, there are copper coins that can be acquired from completing quests and battles too, which can be used to buy general goods/equipment and pay for skill progression. Thankfully, the items that silver coins pay for don’t provide a massively unbalanced play experience over those players who decide to progress through sheer hard work.

Also, it should be noted that there seems to be a glitch between the game and the Apple’s Game Center. During my time playing I should have unlocked at least three different achievements, but none of them ever registered.

Empire Online isn’t a bad game by any means. It’s cute and charming, but it feels unfinished at times and doesn’t feature enough unique content to stand out from the pack. Hardcore MMO fans might find it enjoyable enough to check out, but there are other, better, games available for newcomers to play.