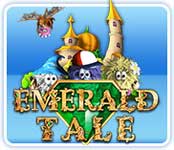 Emerald Tale, a cute and charming 3-in-a-row puzzler from Enkord, can best be described as Bejeweled meets Car Jam, borrowing from both of these game types to create a brand new interactive experience.

You’ve probably heard of the former, where players must click on gems on a grid so that at least three of the same color are touching vertically or horizontally, but for those who haven’t played Car Jam or a variant, it’s a game challenges players to slide blocks around on a grid so that the exit to a level becomes accessible.

Before we get into the gameplay mechanics, you’re first introduced to these little hairy critters who resemble the stars of the game Chuzzle from PopCap. As one of these creatures, you set out on an epic adventure – through lush rural areas, snow-covered mountains and even nearby planets – in order to rescue a kidnapped princess from the claws of a ferocious dragon.

OK, so this story is trite to say the least, but a few twists and turns will keep the gamer somewhat interested in the outcome.

In order to make your way throughout these many environments, you need to complete more than 110 levels, each with a unique layout. You see your character on the screen, and a glowing portal you need to reach to advance a stage — but between you and the magical gateway are a handful of rocks, trees and runes. It’s your job to pair up the runes so that at least three of the same colored ones are touching, causing them to disappear; you do this by clicking on a rune that is, say, yellow, and then clicking where you’d like it to be moved to, presumably beside or between two or more adjacent yellow runes (or a rainbow rune which can be used as any color).

Sounds fairly straightforward, sure – after all, this developer’s motto is “fun games made simple” – but keep in mind if you move a rune stone without making a 3-in-a-row match, a number of other runes will pop up on the screen, which could block your path even further.

Players can also pick up extras throughout these levels, which as more than 100 collectible gemstones to fill up magical tablets, coins that can be used to pay for access to new locations and Leprechaun coins and other bonuses. You can also talk to other critters on the board, who will give you information, such as a hint to hidden gems, coins or alternate portals to exit the level.

Power-ups, obstacles and special runes also add to the fun, such as lock-and-key scenarios, bombs and dynamite that can level a section for you and crystallized runes that need to be broken free before paired up.

Emerald Tale is a fairly simply and family-friendly puzzle game that should provide many hours of fun. Unlocking new areas, accessing new power-up runes and unraveling more of the story also serve as a dangling carrot. The game may not be entirely original, and there’s only the one game mode, but is a fine pick to waste away a lazy Sunday afternoon.