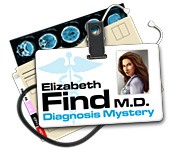 As an immunologist at a busy hospital, Dr. Elizabeth Find works as part of a team of specialists diagnosing patients who come through the emergency room doors with mysterious illnesses. You’ll sit in on three of her cases in Elizabeth Find M.D. – Diagnosis Mystery, a blend of hidden object gameplay and medical-themed mini-games.

If you’ve ever watched the television show House, M.D., whose sharp-tongued title character is played brilliantly by British actor Hugh Laurie, you’ll get a feel for this game’s approach. (The game even references House’s long-running joke about lupus.) Except that Elizabeth isn’t the head of the team; rather she works under her boss Dr. Monica Roberts along with a rival of sorts, Dr. Stephen Edwards, and a few other side characters as well.

Each of the three cases – a comatose man with no I.D., a coughing child, and a woman with a strange rash – starts with a patient arriving at the hospital suffering some sort of malady. Inevitably, coming up with the correct diagnosis involves not just investigating the patient’s physical symptoms, but playing detective by going out and talking to the patient’s colleagues, and doing a little snooping to search for clues or causes.

Gameplay consists of the usual fare: searching cluttered scenes for a variety of objects from a list. Variations include spot the difference, finding 10 of a certain item, audio clues, and putting things back into a scene (such as an elephant’s trunk onto an elephant statue). The audio clues unfortunately contain no workarounds for hard of hearing gamers, but they only occur twice in the game. The game offers unlimited hints that recharge over time, but the more times you use a hint, the longer the hint meter will take to recharge.

Occasionally you’ll also have to use the tools in your medical bag to collect samples for testing, such as drawing blood from a patient’s arm with your syringe, listening to a heartbeat with your stethoscope, or collecting a mould sample in your petri dish. You’ll analyze these samples in the lab in a series of mini-games that include zapping bacteria by clicking on it, identifying blood type by mixing liquid samples, and identifying blood samples with the correct body part.

While I found myself curious enough about the outcome of each case to keep playing, I was distracted by the lack of context displayed by the majority of the hidden object searches. In other words, in order to enjoy the game you’ll have to get over the fact that a hospital could be so unhygienic as to be littered with apples, toilet brushes, beetles and tin cans, among other things; or that you might have to find "Mt. Rushmore" embedded into the wall of a school classroom, and so on.

Some of the writing seems just plain lazy as well. During a consultation, for example, Dr. Roberts decides that she needs a few minutes to digest what you were telling her… and while she’s thinking about it, you get to search her office for random junk.

While it’s issues like these that prevent Elizabeth Find MD: Diagnosis Mystery from truly distinguishing itself, the medical theme is at least less overused than other hidden object settings, the gameplay itself is solid, and the cast of characters is interesting enough for those that like to pay attention to the story.