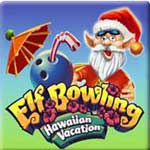 Scientists may refute the concept of “devolution,” or biological regression, but to those who’d argue against society’s continued decline, we humbly offer the following rebuttal: OK! magazine. Celebrity Circus. Eddie Murphy’s Meet Dave. And, of course, what’s certain to be everyone’s new favorite harbinger of the impending apocalypse, Elf Bowling – Hawaiian Vacation, which somehow finds a way to make casual gaming’s most insipid (yet strangely compelling) arcade outing even more brain-dead, if humanly possible.

But first, the positives: For starters, the action (players simply pick a starting position, left-click and hold while sliding their wrist up/down to set throw power then use the mouse to navigate a ball down tropical-themed 3D courses) remains as simple and intuitive as ever.

Head-to-head action is once again a highlight as well, with support for competing against computer-controlled opponents or trading turns with a friend on the same PC built right in. (Including options that cleverly let you choose which bonuses are available during matches, or remove power-ups from play altogether.) Heck, we’ll even go so far as to admit that the jokes uttered by the trash-talking, sunglass- and swim trunk-sporting elves who double as pins (hence the game’s title… imaginative, eh?) prove unsettlingly amusing to boot initially.

The one teensy little problem here is that the title’s playground humor, ultra-repetitive action, and single-minded determination to beat the same shtick fans of the series have uncomfortably chuckled at umpteen times before even further into the ground dooms the outing right from the start.

OK, we get it – the elves are on vacation, they’re crashing an elite cruise and a few new alleys (beach, cliff, ship, etc.) and ball decorations (oranges, palm trees crossed with candy canes, floral shirt patterns) are available. And yes, we further understand that one-liners like “leave Britney alone” or gags that involve the little troublemakers farting, then saying “wasn’t me” are what made the series such an online phenomenon to begin with.

But here’s a novel thought: Apart from some attractive new visuals and animations (no joke… love the way the elves hop, shiver and gasp with terror, especially during close-ups), would some meaningful added bonuses or novel play mechanic refinements really have been too much to ask for?

The upshot being that even if you’re willing to sit through an endless cavalcade of identikit witticisms such as “ever get negative results from an IQ test” or “when you were born, did the doctor slap your mother,” there’s hardly reason to do so. Sure, the general setup’s still sound, with opponents taking turns using power-ups they’ve gained to bolster their own performance (i.e. oversized balls, speed boosters and gutter-removing extras) or hamper rivals (say, by laying down barriers, oil slicks or magnets).

And certainly, you’ll enjoy visiting with an increasingly more colorful and inventive range of backdrops and baddies as much as ever. Frankly though, the whole joke gets stale round about the second time you hear a given bit, let alone the 37th. Furthermore, much as whittling buddies’ balls away with sandpaper or tossing out electrical clouds that make their controls go haywire also entertains, let’s be honest. Where’s the new and significant mix of play styles; token range of feature upgrades; and selection of fresh challenges you’d expect from any given sequel?

What you basically get here is just a re-skin of Elf Bowling 7 1/7: The Last Insult that slaps on a quick story revision, new visual elements and not much else to an existing title in order to make a quick buck. As such, the package is almost more pop culture artifact or gag gift than proper time-waster, offering roughly the same replay value and depth as the average Flash-based outing, or any of its predecessors.

Not that Hawaiian Vacation‘s a complete disaster; beginners will undoubtedly get a kick out of the same elements that the rest of us previously found so fresh and amusing before experiencing them 500 times over. Nonetheless, like last Christmas (seriously, as of press-time it’s mid-summer… who’s thinking of Santa hats instead of Bermuda shorts?) we’ll be happiest when the whole experience is just a fading memory.