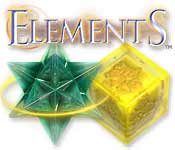 With so many increasingly complex casual games flooding the market, it’s easy to forget that sometimes the simplest concepts can still work wonders when it comes to providing an afternoon’s entertainment. Case in point: Elements, a basic but enjoyable New Age puzzler that’s sure to engage with its soothing presentation and straightforward mechanics, which – while effortless to comprehend – will leave you happily perplexed nonetheless.

According to the storyline, a small cottage in Venice has concealed a studio belonging to Leonardo Da Vinci pal Luca Pacioli for hundreds of years. Following researchers’ discovery of the hidden getaway, they also note the presence of several rare documents, including the “Alchemy Treatise,” which reveals how to create life by combining elements. The only catch: The manuscript’s incomplete. To unlock its secrets, you’ll have to tinker with earth, air, wind and fire in order to unlock a hidden fifth element crucial to completing the equation.

Set atop beautiful backgrounds such as erupting volcanoes or sun-dappled marine realms while mysterious and ethereal musical interludes play, you’ll find plenty of brow-scrunching challenge waits. Each stage is basically set inside a book, albeit one filled with diagrams and shapes. Several of these objects (fiery red jewels, tan gems around which debris whirls and sputters, white diamonds filled with mist) are linked together by sketches; others are temporarily separated from their fellows.

The trick to winning: Combining connected elements of the same type into larger wholes. Cheerfully, doing so merely involves pairing identical icons next to one another by swapping the position of any given one with another item on the board. If the move you’ve chosen doesn’t result in a match, objects return to their original positions. If it does, a larger version of the same shape is formed.

Bear in mind, however: At least in Classic mode, your goal is to fill meters that relate to each element by making associated matches. (Timed and Relaxed options are also available, slightly boosting replay value.) And that objects can only be paired with carbon copies of the same size, not to mention ones joined by sketches in the book. Thankfully, there’s no limit to the number of swaps you can make and the game lets you know how many moves remain. What’s more, when you run out of options, the screen simply zooms out to offer additional escape routes. But the real challenge comes from the need to think several steps ahead, as combo moves can seriously affect the flow of play.

You see, when elements combine, they not only form a larger facsimile, but also change the direction in which linked connectors point. Learn to create chains of objects that systematically merge in sequence and you’ll gain bonuses such as glowing “power elements,” which can be swapped with fellows of any size. Score a double combo, and you’ll instead gain a wild element, capable of being exchanged for any sort of gem as well, no matter how big it is or what type.

Apart from progressing through the tale and unlocking new playing pieces – rain, geyser, lightning, etc. – or occasional text-driven plot updates though, there’s really no compelling impetus for continued advancement. Mind you: The game’s base mechanic works well enough, and is sure to keep those looking for a relaxed, but challenging mindbender coming back. Still, unless you’re looking to kill time on an airplane or wind down after a hard day at the office, it’s hardly nail-biting stuff.

Speaking as veteran joystick jabbers, we’d have liked to see greater complexity, more general variety and a larger selection of power-ups or bonus-style twists. (Not to mention more involving plot developments or at least a campaign-style adventure map.) But given the continued success of basic brainteasers like Bejeweled and countless Solitaire variants, it’s obvious that there’s something to be said for abject minimalism when it comes to game design as well.

As such, action, arcade and adventure junkies should take a wide berth; those who enjoy more cerebral pursuits give the demo a whirl before buying. It almost goes without saying: Elements proves a perfectly fun, functional and grey matter-taxing (if relatively innocuous) amusement that’s blessed with good looks and a catchy score. Unfortunately, it’s not exactly what we’d call brilliant or particularly engrossing either, rendering the title suitable mostly as a way of relaxing before turning in for the evening or soothing mid-day diversion.