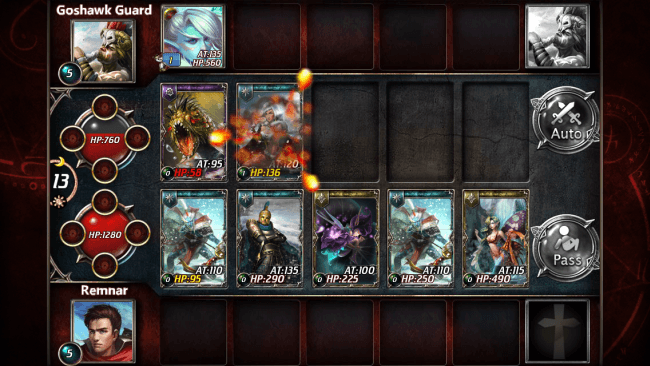 The same CCG you’ve played before

Back in January, I reviewed a game called Lies of Astaroth. I liked it quite a bit despite there being a few issues with progression, energy management, and a bothersome menu system. Why am I bringing that up? Because Elemental Kingdoms is the exact same game. No, really, it’s the exact same game as Lies of Astaroth. The only difference is a visual overhaul and some new audio.

That’s not to say that there’s anything inherently shady going on here, though. After doing a little digging, I was able to find out that Perfect World and iFree Studio have actually been working together on Elemental Kingdoms; so while the original developer’s name isn’t on “the box,” they were still very much a part of the game’s creation. At the very least, it’s not something to worry about from a legal standpoint. 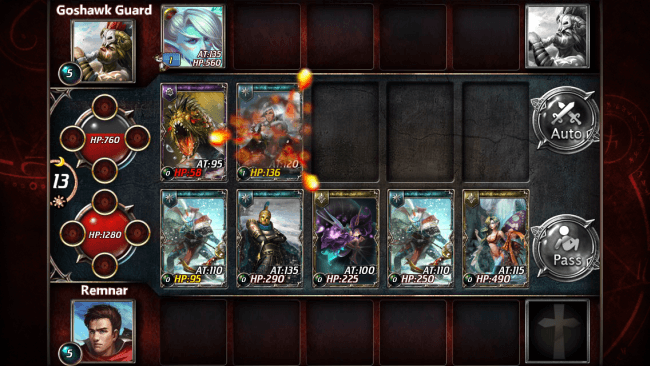 Elemental Kingdoms is every bit the mobile CCG as its almost-twin. Players gather cards, create decks, enhance their favorites by sacrificing lowbies and a little cash, and then square off against NPCs and other players. There’s something of a story here as well, which requires steadily fighting through several different areas of increasing difficulty in order to advance. Each section of the world is loosely themed as well (swamp, tundra, etc.), and the cards used by enemies tend to match their elements, which is something worth considering before blindly jumping into a boss fight.

Battles themselves are fairly hands-off for the most part. One card is drawn per turn, and each card has a designated wait time before it can be activated. Once a card is ready, players just have to tap on it to toss it into battle. Cards will attack whatever is directly in front of them, with a few exceptions involving special abilities, or attack the opponent directly if there are no cards in their way. That’s the extent of player interaction: deciding when to use a card. As soon as the card is in play, it just does its thing. Powers activate automatically, blows are exchanged, etc. The real power the player has is in deciding which cards to place in their conservatively-sized deck, and which ones to level up in order to increase their attack/defense and unlock new skills. 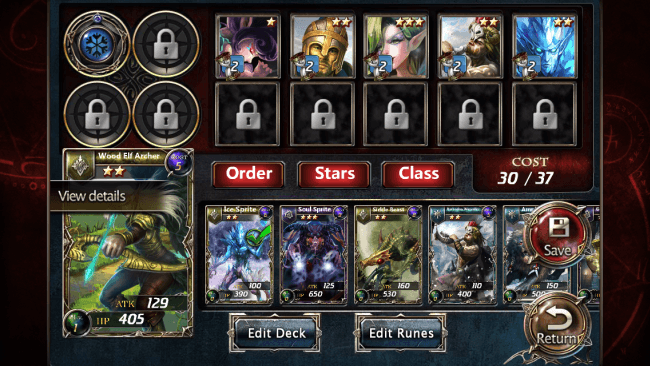 I’ve said it before with Lies of Astaroth and I’ll say it again for Elemental Kingdoms: I really, really like the emphasis on individual cards. It’s not like a lot of other CCGs where players have to make sure all of their cards work in tandem (although they still can to a degree, of course) or pay more attention to overall numbers for attack and defense. Each individual card can be an absolute beast if it’s powerful enough. So much so that one or two heavy hitters could even hold the line by themselves in certain situations. It’s the sort of system I can’t help but find both satisfying and rewarding.

The problems persist, however. Not just because Elemental Kingdoms is the exact same game I’ve already played way back in January, but because absolutely none of the issues I had back then have been addressed. There’s no Home button on any of the menus, but a lot of important options can only be found on the home screen (the Arena, Enhancement, etc). So if a player is in the map screen completing quests, and then decides to enhance a card or two, they’re going to have to learn to like the Back button a lot. The progression system is also a mystifying grind. Enhancement, the Arena, and the Temple simply aren’t available until players reach specific levels. This wouldn’t be so bad if everything was unlocked at level 10 or so, but the last bit (the Temple) doesn’t open up until level 21. Level 21! And to make matters worse, the game uses a rather poorly paced energy mechanic that takes quite a long time to recharge. It makes for some very slow going. 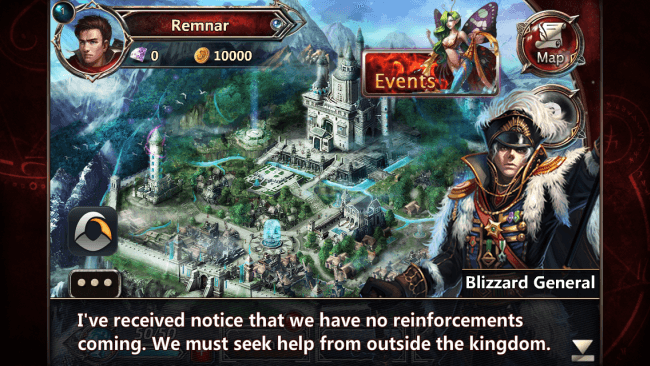 Both Elemental Kingdoms and its “inspiration” are very solid and entertaining CCGs. The energy mechanic is a bit of a buzz kill and the need to grind in order to unlock all of the options is made all the more irritating because of it, but it’s still a pretty fun game all things considered. It’s just not original in any conceivable sense of the word. If that’s not an issue, then by all means give it a play.