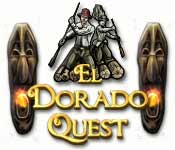 Rather than sit around the home or office whiling away the hours in front of PowerPoint presentations or monthly budget plans, who wouldn’t prefer trekking off through the Amazon in search of Incan gold? Thankfully, now you’ll get the chance with El Dorado Quest, which sees two explorers – Bob and Jane – starring in a pattern-matching puzzler that takes them deep into the heart of the rainforest in search of the lost city from which the game draws its name.

Depending on your individual perspective and overall familiarity with the match-three genre, you’ll either be thrilled or chagrined with the amusements that wait in store. To wit, the setup couldn’t be more typical: Starting on a world map (and one that strangely shows your progress only once you’ve beaten all the individual levels from which each stage is comprised), you’ll visit an increasingly exotic range of locales. Framed by misty volcanoes and creeper-choked jungles which adorn colorful scenario backdrops, each self-contained encounter presents itself in the form of a varyingly-shaped grid filled with squares containing emeralds, bracelets, masks, stone eyes and other bizarre objects.

Per standard genre convention, beating each challenge requires that you make horizontal or vertical rows of three or more similar objects by swapping two titles at a time, with matches disappearing from the board once constructed. (Higher-situated tiles then fall down per the laws of gravity, filling in the gap, and potentially causing massive, screen-clearing chain reactions.) Any tiles located beneath an object that was part of the match turn gold, with pieces of 7 collectible amulets appearing on-screen when you’ve changed the color of all squares. Once you’ve made amulet pieces appear, you’ll then need to acquire them by removing any tiles underneath, with the entire process having to be completed before an ever-dwindling timer runs out and robs you of a limited supply of lives.

Innovative the concept isn’t to say the least, especially since scores are low (think 5 points per tile) and there’s no real reward for making huge combos as in competing games, which award cool extras like eye-popping spells or hidden achievements for better performance. But there is one intriguing twist presented, in that on some levels, you’ll need to remove certain squares via matching to clear a path for Bob and Jane (depicted as animated figures who automatically stroll open pathways on your monitor) to reach specific objects.

For example, you may be required to clear the way forward so Bob can flip a switch to make a boulder drop and destroy a barrier that’s blocking access to an amulet, or so Jane can grab a key that opens a troublesome door. It’s certainly a clever touch, but really, with your biggest payout for doing so the chance to click once on a shovel icon then click on some rocks to watch them automatically removed by the computer, it’s hardly the pinnacle of excitement or interactivity.

Granted, the game does score points for its simple learning curve, general user-friendliness and, surprisingly enough, a catchy musical score that’s filled with tribal chanting and primitive beats. But play mechanics are highly repetitive, the art style bizarrely Eastern European and selection of collectible power-ups and obstacles less than inspired. (Think hammers that you can grab to break individual blocks and lightning bolts that annihilate entire vertical rows, or glass tiles and stones that require nearby matches to remove.) The key takeaway being that if you’ve played nearly any other recent offering in the same category like Heroes of Hellas or Puzzle Quest: Challenge of the Warlords, it’s hard to go back to such a simply-executed concept.

That’s not to say we don’t like El Dorado Quest. But with only a single play mode and very little in the way of compelling eye candy or fresh gimmicks, how much you’ll enjoy the title depends on how many similarly-styled adventures you’ve already tackled beforehand. Definitely try before you buy, and go in knowing there are plenty of more polished and engaging options to be had just as easily for the exact same price.