Home / Reviews / Eight-Minute Empire Review: From Board to Phone

Eight-Minute Empire Review: From Board to Phone 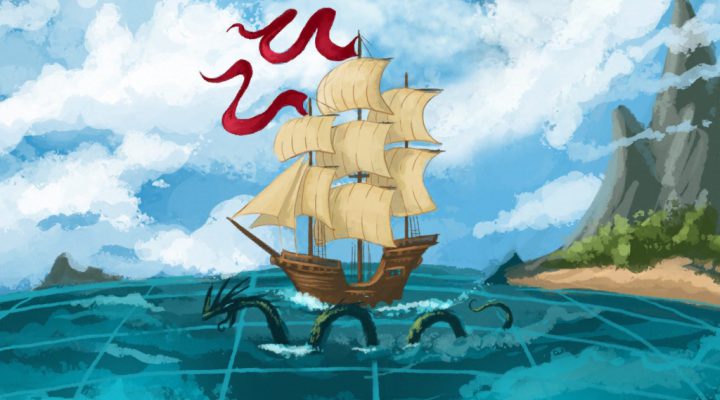 Smooth gameplay even when engaging online.

Offers the chance to play offline - great for saving data!

For those unfamiliar with the board game a longer tutorial would be handy.

Clearer path to accessing the rulebook in gameplay would be handy.

Bringing a beloved board game to mobile can be a daunting challenge. Regardless of the specific game, trying to retain the purity of the gameplay experience for its original fan base while making the game inviting enough to attract new players is a difficult balance to strike. In bringing Eight-Minute Empire to life on mobile and desktop at the same time, Acram Digital was taking on a monster challenge.

With two Golden Geek awards, Eight-Minute Empire has become one of the go-to board games for families in the know. It’s simple enough to be fun for all ages while simultaneously being difficult enough to really require you to think strategically.

The biggest thing distinguishing Eight-Minute Empire from other games in this space is the speed of gameplay. Each player has a set number of turns (13 in a two-player game, 10 in a three-player game) and coins from the get-go. While coins can be bet in order to receive the privilege of going first (or in whichever order you prefer), players are all generally operating within the same strict constraints. This is one of the keys to the game’s fun. The most strategic player will win and who that is will likely change from game to game.

The other key – the speed of gameplay. It might be called Eight-Minute Empire, but it’s relatively unlikely that it’ll take a full eight minutes to get through the game unless it’s being drawn out by those playing it. You’re realistically looking at a five-minute empire, though it’s easy to understand how the physical version of the game might take eight minutes. Unlike Risk which can be a whole-day endeavour, the game is typically over before anyone starts to cry.

In the mobile version of Eight-Minute Empire, you have the option of playing against one or two AI of varying difficulty levels or of playing against other human beings either online or in real life. While online play is a little more randomised, the option to share the device and play with friends and family is another one of the game’s most attractive features. Three family members or friends can have fun at the same time with only one device. It seems so simple, yet it’s still something that’s relatively rare. 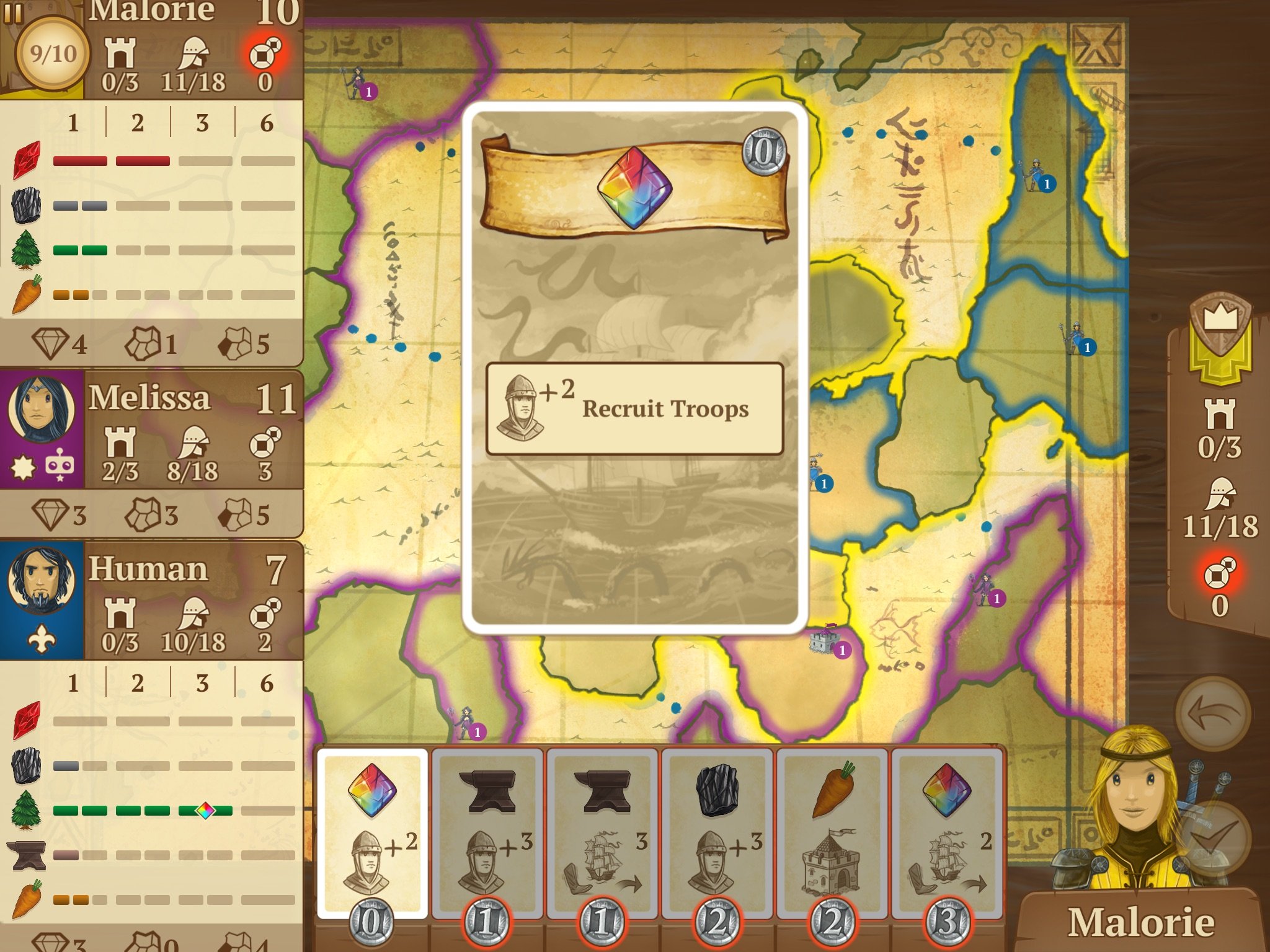 For those who aren’t overly familiar with the board version of the game, the tutorial will likely be a little too short. You can get a hang of the basic motions but getting your head around the strategy and, more specifically, what it takes to win, is a little more challenging.

Fortunately, though it isn’t advertised, the rule book is always on hand to help you. It can be accessed from the main menu to review before you jump into a game or from inside the game by hitting pause and the question mark. 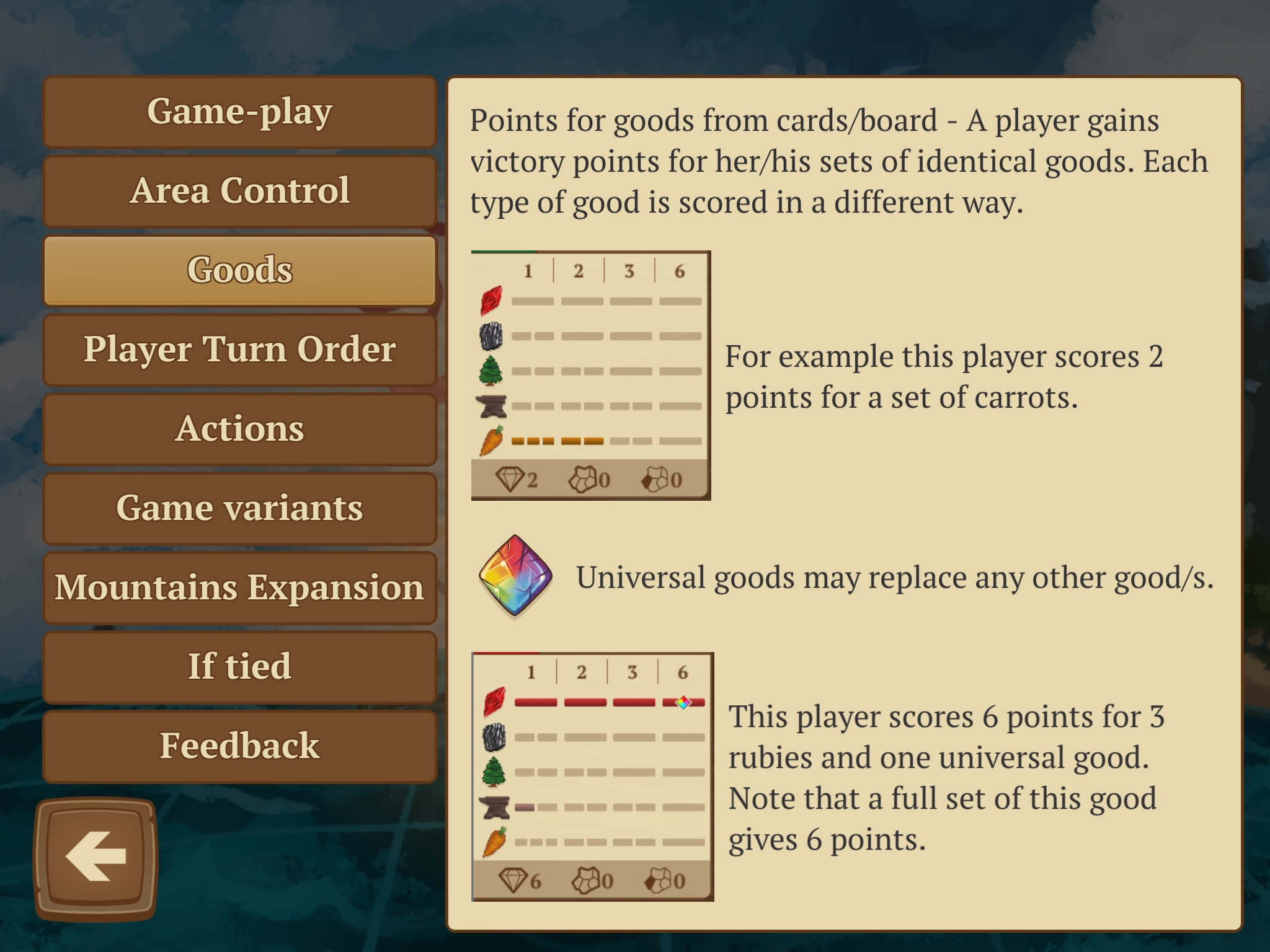 When it comes to gameplay, Eight-Minute Empire performs really well on a full range of devices, including older devices. Online gameplay seems to work well as well, at least on latest gen devices, with no lag to report. In order to play online against others there’s a registration process that might put some players off, but will hopefully help in the formation of an online community of mobile Eight-Minute Empire enthusiasts.

As a premium game, $4.99USD on the App Store, with purchasable expansions that unlock new maps, it’s a complete uninterrupted playing experience. Anyone who’s enjoying the game will likely find the expansions a great deal to add a little more variety and challenge. 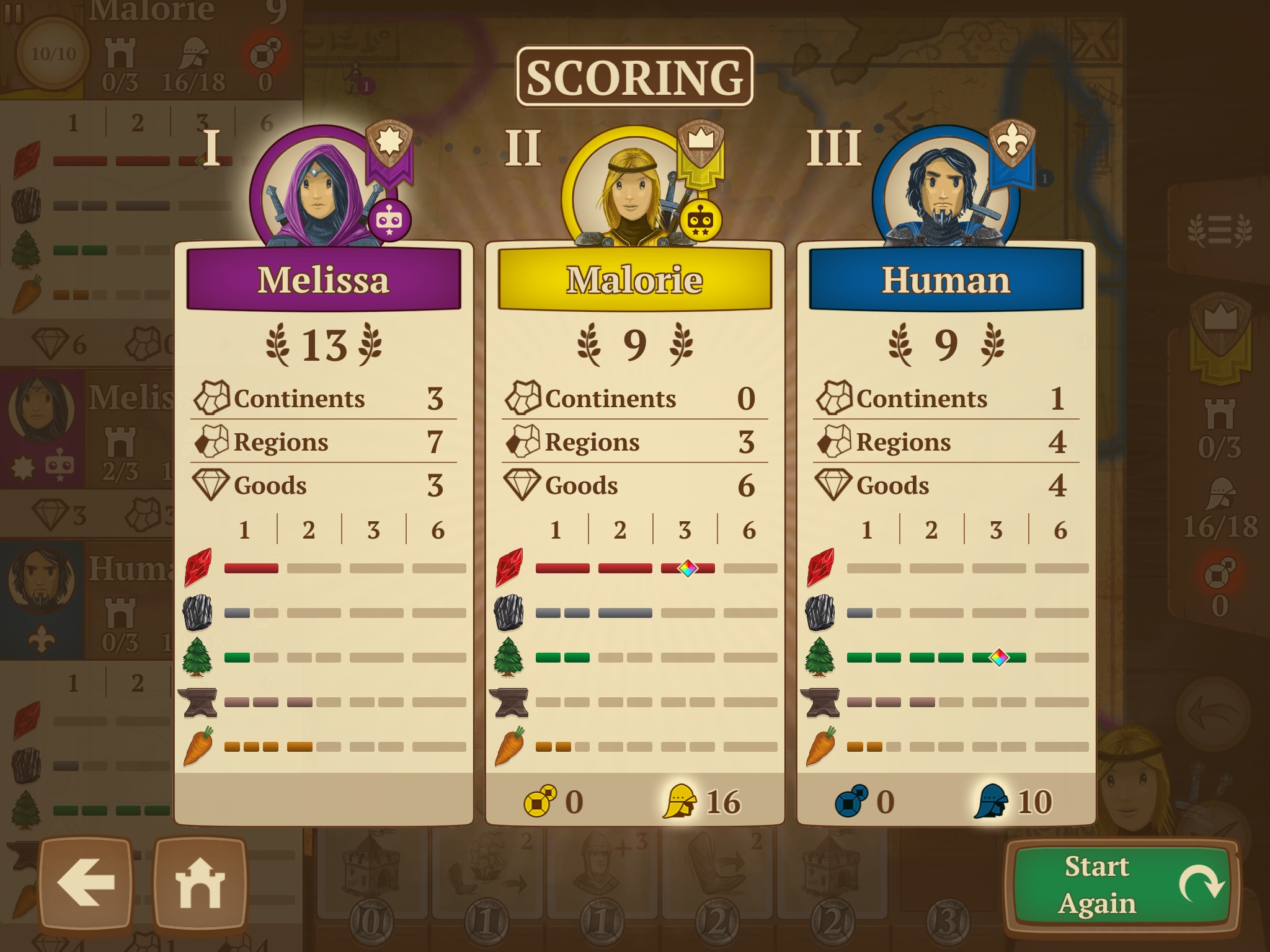 Overall, if you’re already an Eight-Minute Empire fan, you’ll likely be impressed by how it’s been transported to mobile. If you’re a strategy fan in general, it might be the perfect game to add to your arsenal for those days when you’re short on time but still want to play. It’s also a great game for families who are planning road trips. This isn’t a game for everyone – it lacks the crossover appeal that’s likely to convert massive amounts of folks who aren’t keen on strategy – but it does exactly what it says on the tin.