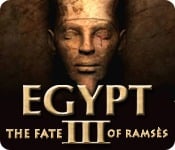 Mystery is afoot amidst the desert sands. Determined to prolong his reign, the pharaoh Ramses II has, at the behest of deity Amun-Re, begun construction of a giant obelisk. But when accidents begin to abound at the site, you (as young female magician Maya) are called in to investigate in pleasingly atmospheric, if all too predictable, 3D adventure Egypt III: The Fate of Ramses.

Formerly known as The Egyptian Prophecy and sold on CD-ROM, this robust tale of ancient intrigue holds up surprisingly well for a nearly five-year old outing that mostly sticks to time-honored point-and-click conventions. While certain visual elements – such as backgrounds, which sport a washed-out, muddy look and characters, which come across as grainy, low-resolution computer models – are starting to seem long in the tooth, overall, the setup still works nicely for casual players.

Essentially, you’ll move step-by-step through various environs (temples, storerooms, surreal landscapes, and so on), panning your mouse about 360 degrees looking for objects and individuals to interact with, or puzzles to solve. Much like Myst and other genre forerunners, as well as recent large-file outings such as Post Mortem and Agatha Christie: Evil Under the Sun, success hinges on brainpower and logical thinking, not quick reflexes.

Using its theme to good effect, the title does an excellent job of immersing players in the spirit of the times with historical tidbits and exotic environs which elegantly capture the spirit of the era. Catchy sound effects from chirping birds to rustling palms, crackling torches and rushing water also help add vibrancy to the attractive, but otherwise mostly lifeless environs highlighted.

Navigation is additionally handled well, as you’re seldom stumped as to the next move, with mindbenders fairly straightforward and approachable, making this one of the few conundrum-laden titles out there suitable for beginners. Still, from faraway to fantastical settings, elementary to enigmatic brainteasers, veterans will find the whole drama to be pretty paint-by-numbers, with the quest mainly notable for its sense of charisma, not hands-on excitement.

Combined with the tranquil pace at which the episode – based around hunting for items, chatting with strangers and looking for cursor-selectable hotspots – unfolds, it all makes for a fairly relaxed experience. And one which can be breezed through in a relatively short amount of sittings at that, especially if played in the company of friends or family members, who’ll enjoy tagging along on the journey.

More a leisurely jaunt through one of history’s most fabled periods than grueling slog targeted at MENSA members (as is the case with most rivals), it’s a great escape to unwind with after work. While genre purists won’t necessarily appreciate the saga’s forgiving nature, if you’ve got a young aspiring adventurer in the family, it makes as good a place as any to start.

From unexpectedly catchy spoken dialogue to a comfortable, icon-driven menu system and surprise encounters with the supernatural, this is a game clearly designed with the everyday player in mind. Even the heroine, who occasionally shouts out advice, does her best to help guide players through the voyage, and minimize frustration. It’s a welcome gesture, as there are a few surprises in terms of head-scratchers, from mazes to slider puzzles, but nothing that can’t be successfully sidestepped with a little concentrated thought.

Think of Egypt III: The Fate of Ramses as the interactive equivalent of one of those hour-long History Channel specials, and you should know right away whether to hit the Wayback Machine or run for the hills.

Gamezebo tip: If you like point-and-click adventure games, try Agatha Christie: Evil under the Sun, Syberia, and Dracula Origin.