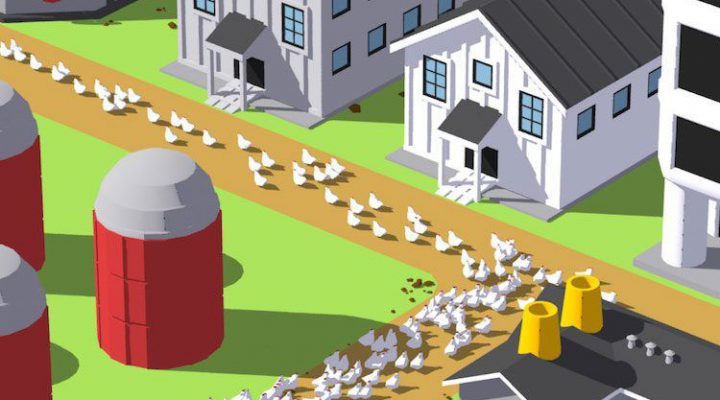 Ideal for short or long bursts of gaming

Satisfying to say the least

Like so many idle clicker games, Egg, Inc. starts out a little…eh. It’s fine, sure, but its dated visuals and slow progression makes you initially not so fussed about what’s going on. That’s coming from someone that has an unhealthy love of idle clicker games, too. Somewhere along the lines — and sooner than you think — Egg, Inc. gets its claws in and never lets go. It’s ludicrous just how satisfying it is to watch your little egg farm go from strength to strength.

There’s a kind of very loose story in there somewhere. You see, in the future, eggs will provide more than just a protein rich meal. They’ll also provide medical care and, basically, the solution to all our questions. As the game calls it, it’s a new form of gold rush, and eggs are big business. There are two key ways to produce eggs quickly. The most straight forward is to tap like crazy on the red box on screen, unleashing more chickens onto your farm who inevitably end up laying more eggs. The idle clicking way is to wait it out, watching as the game gradually boosts your output for you. It’s a typical format for such a game, but there’s a plethora of ways to gain more eggs more quickly. 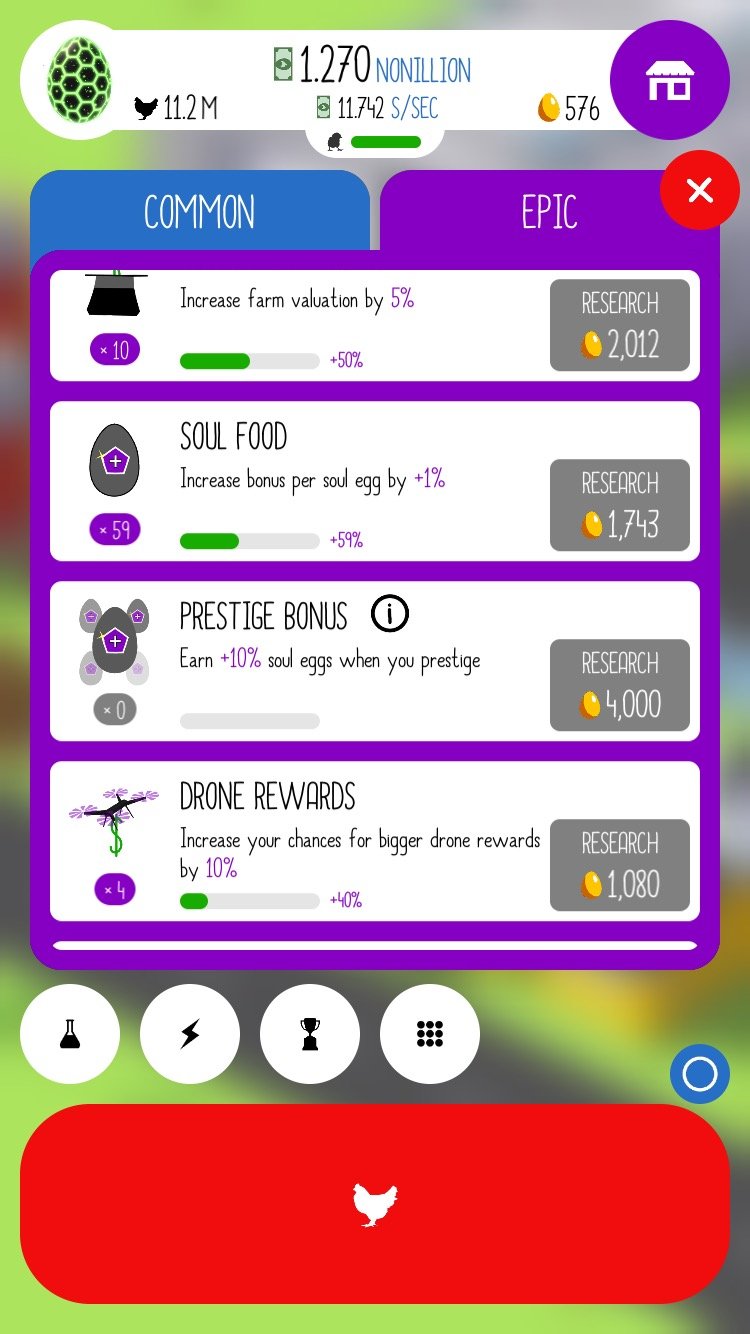 That’s where Egg, Inc. begins to feel like a spreadsheet of sorts. Much of the time you’re negotiating menu screens, choosing which upgrades to carry out. You can boost your egg laying capabilities, how much each egg is worth, or simply increase the size of your silos, barns, and vehicles, so that you can store more eggs overall. It probably doesn’t sound too gripping right now, does it? Kind of like a sports management title though, it’s oddly compelling.

As you progress, you’re tasked with various simple missions. These generally correlate with expanding your business, but they can also be banal things like shooting down drones (by tapping on them). Each gives you a sense of purpose and direction, enticing you into following certain paths. Not that you have to follow them, but generally, success is a step closer if you listen to the game. There’s a dose of humor in there too, via upgrade names, and a newspaper that arrives to give you an update on things every once in a while. 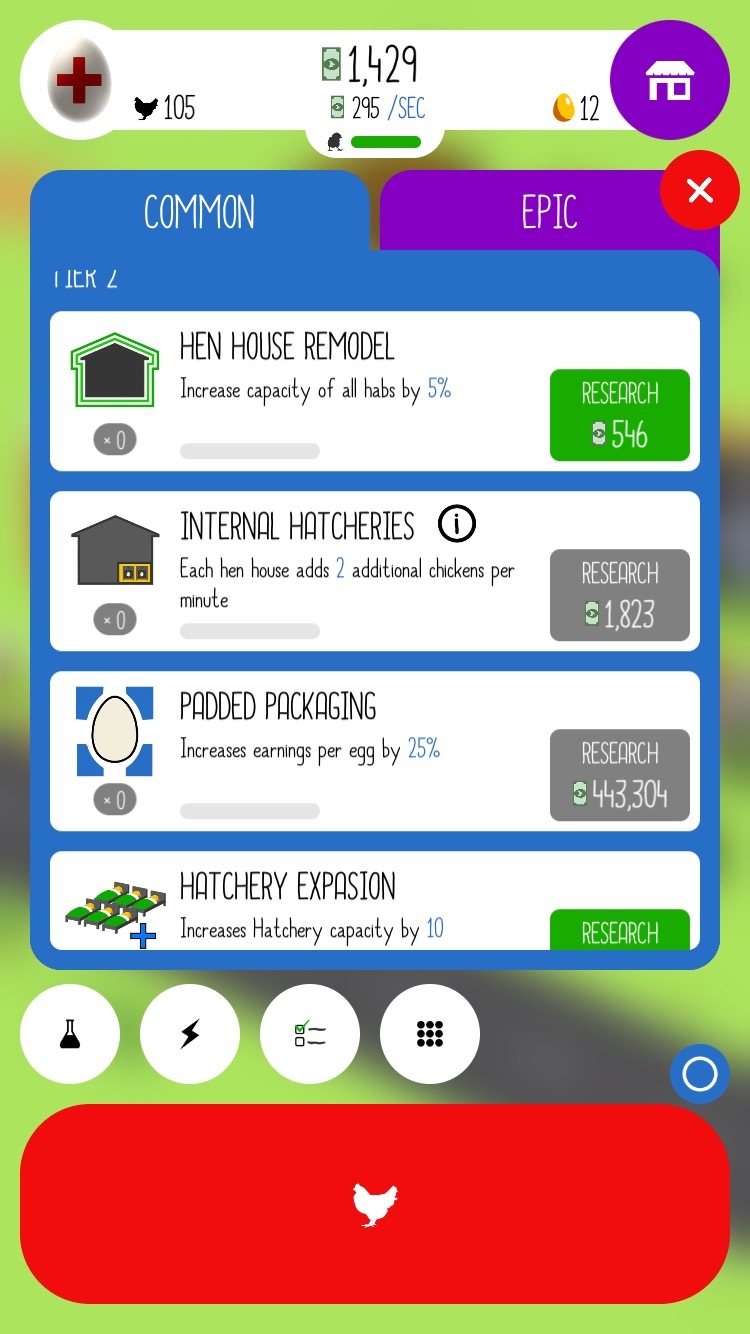 At various points, you’re able to upgrade the kind of egg you deal with. This is Egg, Inc.’s way of telling you that you’ve done a good job. By moving onto the next egg type, you reset much of your progress, starting back at the beginning again but with a clearer sense of how to do things. Certain upgrades carry on from earlier too, usually relating to premium currency purchases (golden eggs). It’s all a kind of gradual sense that you’re getting somewhere, even if you are ultimately doing the same things as before.

Perhaps the biggest success for Egg, Inc. is how it’ll still make you feel like you’re achieving something. By working towards an upgraded hen house, you can see a noticeable difference in how things go. Had a busy day and not had a chance to play since last night? Egg, Inc. will still carry on without you, giving you some much needed money to work with that night. By stepping away from the standard settings for idle clickers, Egg, Inc. manages to scratch that sim gaming itch quite well. You’ll be surprised how quickly you find yourself analyzing the best methods to improve on your earlier egg hatching skills, trying to make your farm that much wealthier in the process.

Dots & Co Review: Not so Laid Back