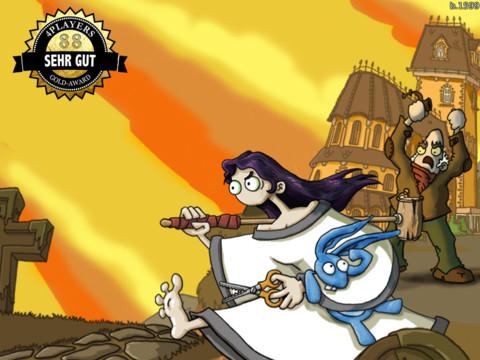 Everyone’s got their baggage. That uncle you don’t really want to talk about. Teenage years as a bullied nerd. The father that may or may not have been involved in committing you to a mental asylum, leaving you with only your frayed mind and sentient stuffed rabbit to keep you company…all with the hopes that you can use flashes of your past to recover memories necessary to escape and make sense of it all. Okay, that’s the kind of baggage reserved for Edna & Harvey: The Breakout.

Not quite like any point-and-click adventure you’ve played before, Edna & Harvey is the realization of Daedalic Entertainment’s original PC title of the same name for iOS devices. It takes you on a twisted, cerebral journey inside the mind of its titular protagonist, Edna, as she struggles not only to escape from the mental asylum to which she’s been committed, but piece together enough of her past to understand why she’s there in the first place. Armed only with her stuffed rabbit Harvey – a self-professed manifestation of her subconscious – she jumps back and forth between her confines, and interactive memories of her upbringing, where both she and Harvey must work together to affect the Edna of the present by bringing crucial items (and memories) forward from the past.

In many ways, the game – like its beleaguered protagonist – is of two minds. In its best moments, it feels reminiscent of Amanita Design’s wonderful Botanicula, based as it is on the careful study and harnessing of human relationships. Or at least what Botanicula would feel like if it fell down a hole to Wonderland. Navigating dialogue trees of painstaking detail, you’re able to discover a method to Edna’s madness and the madness of those around her, obtaining key pieces of information by ingratiating and deciphering the colorful personalities within the asylum. Daedalic paints a world that thinks completely differently, and manages to get you doing so in the process, bringing you refreshingly out of your comfort zone to sift for logic in a place seemingly lacking it.

Unfortunately, it’s the same trait that makes the game’s social point-and-clickery so entertaining that more often than not sinks its object-based gameplay. I often find the complaint that the genre “makes no sense” or “just involves clicking on things randomly” to be a little hollow. In truth, the joy of the point-and-click adventure comes from challenging yourself only to invest in exploring objects that tie to the adventure’s storyline, and achieve reactions based on measured thinking outside the box. Here, however, the gripe is truly warranted. In many circumstances, Edna & Harvey suffers from solutions whose logic is so tenuous that finally achieving them is rendered hollow. 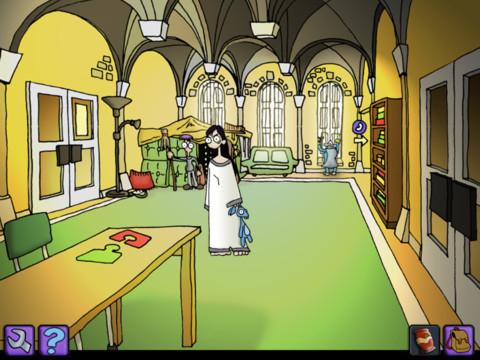 The challenge with a game like this is to develop a set of interaction logic that defies common sense even more so than your standard adventure game, but it seems Daedalic frequently loses themselves in an Edna mindset. Too many times I went to a walkthrough for recourse, and found myself adament that I never would have made the connection explained to me. To my mind, the best point and click adventures are ones where – after finally kowtowing to the game’s difficulty – you felt as if the answer was right in front of your eyes. Here, just the opposite is too often true. This is further compounded by the fact that several solutions, even when known to me, could not be executed unless every single object in a scene had been affected, or I had achieved conditions that seemed retroactively pointless. Why did I need to click nineteen panels on a wall just to allow the one relevant one to react?

Despite this unevenness in gameplay however, the overall world of Edna & Harvey still proves extremely compelling. Like Rocco’s Modern Life or Ren & Stimpy, the game’s cartoon aesthetic feels purposefully off-putting; a mixture between innocent, playful colors and exaggerated, broad-strokes illustration that renders everything just a little less than approachable. In a way, it’s as if Edna herself drew the world, hammering home the game’s feel of journeying through a fractured mind. And the further you travel down the game’s seemingly nonsensical rabbit hole? The more you realize there’s a truly dark story here, that – like the narrative itself – goes well beyond its confines to touch on the same kinds of questions about “sanity” asked in One Flew Over the Cuckoo’s Nest. 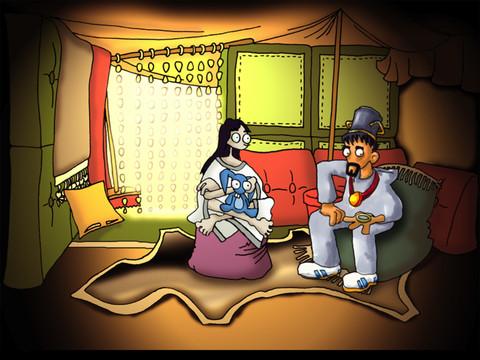 Edna & Harvey began as a university project, and for both better and worse, it shows. The title stands out as an adventure game willing to explore unique subject matter in a wholly unique way, and make steps to redefine the idea of a journey. It suffers from an aversion to normalcy, which sometimes comes at the cost of gameplay, flow, and understanding, but if you’re a fan of point-and-click willing to click outside the box and try something different, this may be just what the doctor ordered.