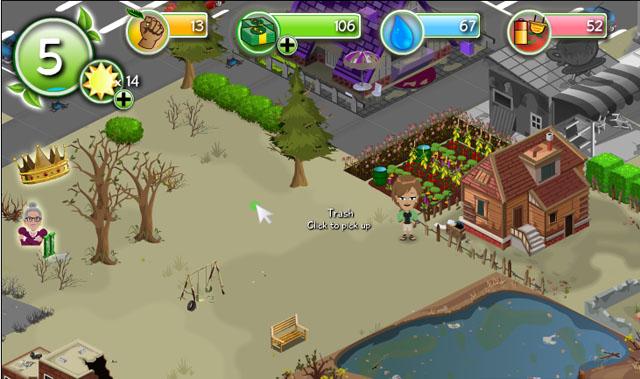 Ecotopia is a social game that wants to help make the world a greener place, but forgot to include any fun

Ecotopia is what would happen if you took that part of a management sim game where you have to clean up your property and turned that into the entire game. It’s a game where you exclusively pick up trash, clean up decrepit properties, and upgrade run-down buildings. It’s an interesting concept for a game that wants to make its players environmentally aware, but it runs into the usual problem that plagues entertainment with educational or ecological themes: when you make an entertainment product with any goal besides being entertaining, then the entertainment value of the product inevitably suffers. To put it differently, Captain Planet isn’t anyone’s favorite superhero and it’s hard to believe Ecotopia would ever be someone’s favorite game.

Ecotopia was launched in partnership with Conservation International, which has resulted in some unusual game mechanics. In the lower-left corner of the screen there is a video window. If you click on it, it launches an in-game player hosting short videos from Conservation International and a host of other ecologically-minded sources. There are in-game quests that require you to view these videos. The feature otherwise feels a bit strange, as it’s largely divorced from gameplay. If you just sit down and watch a ton of videos, there’s no in-game reward for doing so. This seems counter to the basic idea of gamification that Ecotopia otherwise embraces.

The other unusual aspect is the real-world Green Acts mechanic. There’s a list of Green Acts in the game that you can perform in the real world in order to get in-game rewards. They range from the very simple (drinking from a reusable water bottle) to the very elaborate (installing a low-flow toilet). The game wants you to make this a social thing where you upload pictures of your Green Acts to show off to friends. The photos aren’t used for verification that you’ve really done something, though. Instead the game verifies that you’ve really completed a Green Act by… having a friend who plays the game vouch for you. Obviously, this only works for verification purposes if your friend decides to be honest. If you’re playing the game solo, then you basically can’t use the Green Acts mechanic at all.

The problems with the Green Acts implementation crash headlong into the game’s most substantial problem, which is simply bad game design. Ecotopia offers a quest tree for players to pursue, in order to help them level up. It’s very similar to the quest tree used in games like CityVille. Now where a Zynga quest tree is usually carefully designed to keep you slowly making progress, the Ecotopia quest trees are mind bogglingly ill-designed. Very early quests have you performing tasks that take 18 hours to complete or require you to spend what is an astronomical amount of money to fulfill a quest goal. Instead of providing a useful guide to the game, the missions instead make it very difficult to grasp how well you’re doing or if you’re even playing it right. 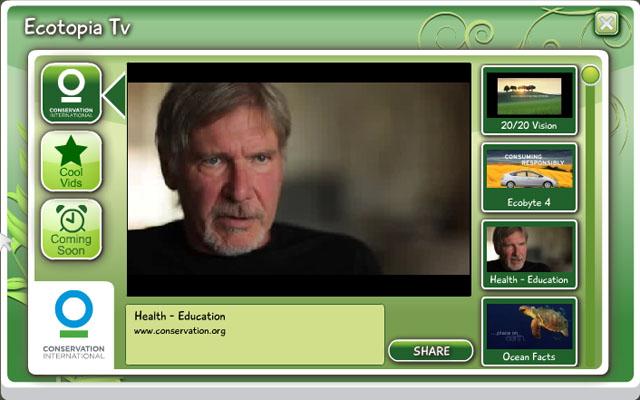 Despite its obvious good intentions, Ecotopia is a difficult game to recommend. The gameplay feels very half-baked and it’s just not a lot of fun right now. The interface is sticky in a way that makes even moving your avatar around seem sluggish and uninteresting. Of course, Ecotopia could improve substantially in the future. Most of its balance problems are of the sort that could be easily fixed, though the Green Acts mechanic and in-game videos may never entirely work out. If you’re already the sort of person who invests time and energy in conservation, you might find Ecotopia fun. For a skeptic or someone who is simply less committed, there’s just not a lot here.