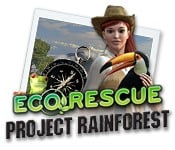 Preserving the rainforest is one of the most important eco-missions mankind faces today. With thousands of unique native species and a rich history, including ancient human civilizations, the rainforest is a truly special place. Identifying various animals, restoring broken habitats, and cleaning up after the pollution affecting the world’s rainforests are all elements of Big Fish’s latest hidden object game EcoRescue: Project Rainforest.

Right off the bat, EcoRescue: Project Rainforest introduces itself as a very different kind of hidden object title. Instead of delving into a fictitious storyline filled with twists and turns, you’re instead introduced personally as being part of an EcoRescue team. Your goal is to restore the rainforests all around the world by cleaning them up, helping wildlife, identifying changes in the environment and restoring the habitat. Along the way, you’ll be introduced to various environments and learn more about the rainforests via your helpful EcoRescue guide.

EcoRescue: Project Rainforest features a variety of levels, all based around the main rainforests of the world. In each hidden object level, you’ll need to find nine hidden objects which are polluting the native environment. Oftentimes you’ll need to make multiple visits in order to completely restore an area. There is also a very large selection of comparative object levels, where you must compare two photographs and pick out five differences each. In addition, there are a handful of levels dedicated to identifying certain species, such as a handful of Tree Frogs, and also levels based around fitting and rotating puzzle pieces to restore the image to what it once was. Sounds easy enough, but don’t be fooled. This title is filled with challenging objects that are very well hidden.

The game also features a highly immersive soundtrack, which really gives you a feel for the environment. Last but not least, EcoRescue: Project Rainforest is overflowing with information about not only the rainforests, but the countries and areas in which they’re in, and all sorts of facts about the various native species. It’s not required you read through them and they can be easily and quickly skipped over, but they’re positively rich in fascinating trivia. You may learn a thing or several, and it’s something that definitely separates this title from your average hidden object game.

A hint system is implemented into the game, however it takes a very, very long time before it becomes active, which would likely frustrate the average player. However, it really encourages you to look for yourself and not just rely on hints. If you click too much, a rain storm will temporarily block your view, making it even harder to find objects. Some of the objects names are also a little uncreative, such as "Trash Bag 1" and "Trash Bag 2". Sometimes the narrative voice won’t match up with the written narrative, but both work correctly and are proper English.

There are a couple quirky things in the game, but not necessarily negative. One example is, in the puzzle levels where you’re supposed to place pieces together to restore the original picture, your goal is actually to do this with wildlife. While it’s great casual gameplay, it’s also a bit awkward rotating and piecing together various monkey parts in order to restore the creature. The second example is, whenever you finish a level, you’ll be greeted with "Ecosytem Restored!" However, oftentimes this isn’t technically true, as there’s trash scattered around the level and you’ll need to revisit it a couple times more before it’s actually completely restored.

Unfortunately, the game is very short. If you’re an experienced hidden object gamer expect about an hour’s worth of gameplay.

Many titles based around spreading information and making people aware are very dry, but EcoRescue: Project Rainforest sure doesn’t. The game does good job of spreading awareness about the state of the world’s rainforests and what we can do to help, including what specific species, host countries, and forests need in order to flourish once again.It’s just a shame that there’s not much game beyond what you get in the free trial.

Journey to the Center of the Moon Review