Home / Reviews / Echoes of the Past: Royal House of Stone Review

Echoes of the Past: Royal House of Stone Review 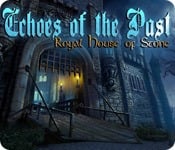 The question begged by Echoes of the Past: Royal House of Stone, a hidden object adventure game from Orneon with great art and some very clever puzzles, is this: How long should a game last to be worth our money? I was having a fine time playing when all of a sudden, at just a hair over two hours into the experience, the game abruptly ended with a "to be continued" message. Does such a short play justify digging into one’s wallet?

We should probably take a closer look at the game before ruling.

It’s a bit of a whodunit. Upon visiting an old castle museum and viewing a series of oil paintings of long-dead royalty we are suddenly whisked into the past to a time when the people in the paintings were alive.

Turns out they’ve been enchanted; frozen like statues all over the castle. Our goal is to find out how this happened and break the curse. To that end, players engage in a series of hidden object challenges and narrative-driven puzzles that lead to the unthawing of each frozen person, who then-via some quick, unfortunately amateurish voice acting-provides us with vague clues about what might have happened.

The hidden object areas have players looking for random items, most of which would be common sights in castles a few hundred years ago, including corsets, axes, and spiders. These challenges are fair, fun, and feature the occasional original twist, including one item in each area that requires players to think laterally.

To find a handprint, for example, I needed to rub a glove on some coal and then press it on a piece of paper to create the mark myself. And, later on, players will need to match up the items they’ve found by either grouping exact duplicates or touching each object to listen to the sound it makes before searching for another item that makes the same noise.

After all listed objects have been found players typically need to find one last item; something required to tackle a contextual puzzle in another area of the castle, such as a lever or a flask. These brainteasers involve activities such as solving a simple equation to determine which weights ought to be placed atop a machine to cause its gears to interact in a precise manner, or the gathering and combining of items to create a grappling rope necessary to access another area.

Often more difficult than the HOG scenes, some of these puzzles had me stumped for quite a while. Mercifully, the developers saw fit to include a skip button that takes a couple of minutes to become active. If you just can’t figure out what you need to do to solve the puzzle (or how to do it), just click this button and the puzzle will solve itself.

It’s a good time, all things considered. It’s just too bad the full game is merely twice the length of the demo, and that it offers virtually no replay value (unless you want to see just how quick you can run through the whole game once you know how to solve all of its puzzles).

Is it worth paying to see the rest? I might say yes if we were at least provided a complete and satisfying story. Sadly, the game ends with a thoroughly disappointing cliffhanger, making it feel as though we’ve just watched a pilot television show, uncertain as to whether we’ll ever get to see a conclusion.

I don’t think there is necessarily a formula that dictates how long a game of a certain price ought to last in order to satisfy players, but I do believe that Echoes of the Past: Royal House of Stone is too short to be worth $6.99. If all casual games were this short, many of us would be buying a new one almost every night. That’s a precedent that ought never to be set.