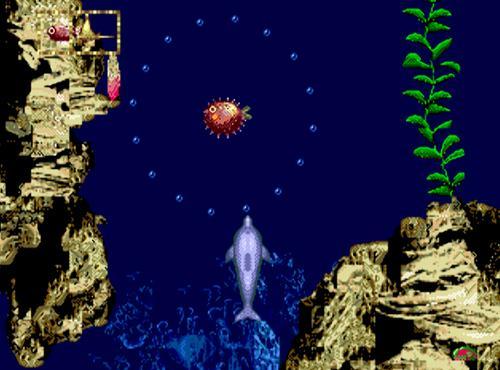 Scientific fact: the only thing cuter than a dolphin is a baby dolphin. So Ecco Jr., a prequel to the classic Sega Genesis game Ecco the Dolphin, definitely scores some points when it comes to sheer adorable charm. But it’s more than just the game’s star that takes a step backwards, it’s the actual gameplay as well. Ecco Jr. is much easier than its infamously difficult predecessor, so much so that it often feels as if there’s no real challenge. It’s also very short, clocking in at around an hour. So unless you’re in the mood for a quick–and I do mean quick–bout of nostalgia, you may want to pass on Ecco’s youthful adventures.

There’s the bare bones of a story holding Ecco Jr. together, which involves nothing more than Ecco going on a journey to find a big blue whale. Why does he want to find it? You don’t really know, but that doesn’t make him any less determined. Over the course of 18 levels Ecco will have to take on a series of different quests, each of which will get him one step closer to reaching this goal. There’s a pretty wide range of tasks for you to accomplish, from winning a game of tag with other dolphins to returning a ball to a seal or helping a baby turtle find its mother.

Controlling Ecco is incredibly simple. Aside from movement, which is handled via the arrow keys, you only need to use two buttons. One controls his echolocation ability, while the other gives him a boost of speed. The echolocation feature is used for pretty much everything in the game. It allows you to search for other animals or items, you can use it to herd schools of fish wherever you need to, or even to collect items. It’s very versatile. The speed boost, meanwhile, isn’t used nearly as frequently, though it does give you the ability to jump out of the water and over small pieces of land or to quickly evade other animals.

The variety in the game is great, but what’s really lacking is any sense of challenge. There are no enemies in the game, so Ecco can’t die, which means there’s really no way to fail a level. You could potentially get stuck when it comes to finding some of the objects while searching the underwater labyrinth, but the incredibly useful echolocation feature makes this highly unlikely. It also doesn’t help that each of the levels is very short and can be finished in a matter of a few minutes.

Surprisingly, considering the game is over 15 years old, Ecco Jr. still looks good. The sprites are big and colorful, and Ecco and his aquatic brethren animate very smoothly. Small details like a turtle getting frightened and quickly pulling up into its shell are absolutely adorable, and really add to the game’s overall sense of charm. You can even take control of two other baby sea creatures–another dolphin and a killer whale–and while they don’t provide any new changes to the gameplay, they at least look great. 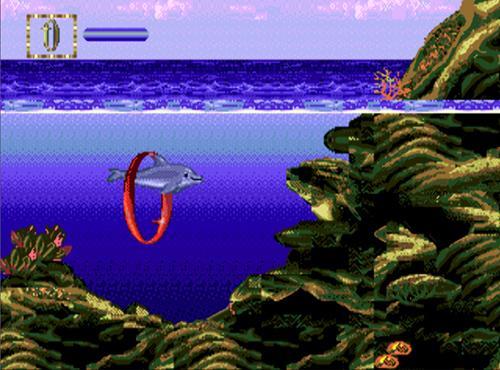 Ecco Jr. has plenty of charm to spare, and while its light challenge and short length won’t endear it to more experienced gamers, it’s a better choice for casual and younger players.