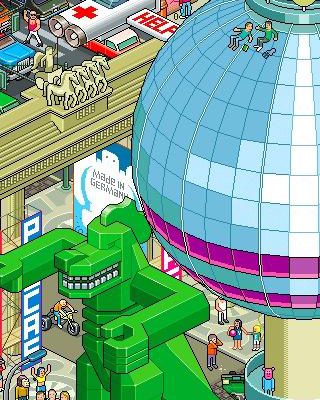 You know what we haven’t seen in awhile? A unique iPhone game that relies entirely on tilt. Sure some games offer tilt functionality, but what about something truly unique that has built all of its gameplay around tilting your iPhone? eBoy FixPix is a jigsaw-style game about fitting pieces together using nothing more than the iPhone’s accelerometer and the amazing artwork of a much-beloved modern pop-art master.

Offering up 100 pieces of artwork from pop pixel artist eBoy (even if you don’t know his name, you’ll absolutely recognize his work), eBoy FixPix offers up a simple yet pleasant tilt-heavy twist on the classic round peg/round hole formula. Players are presented with an image that has several layers. Tilting your iDevice will cause these layers to tilt around the screen accordingly. Line them up to form a picture and you’ve completed the level. Now lather, rinse, and repeat 100 times and you have FixPix summed up perfectly. 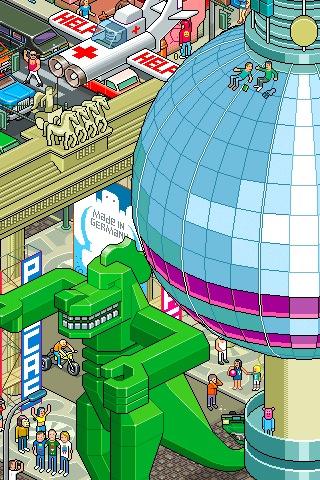 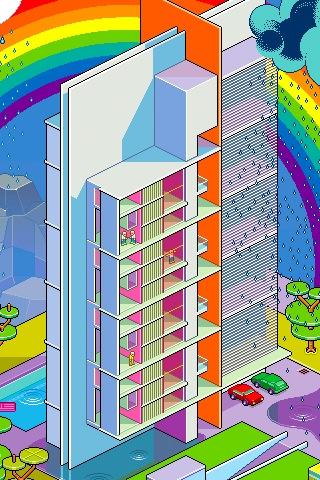 It can be easy to get frustrated when you think you have things perfectly lined up but the game doesn’t recognize it, but the trick is to look for an item that may not at first seem like the obvious tip off. In one scene where a giant robot is shooting laser beams from its eyes, I instinctively tried to use those laser beams as your focal point. When it refused to sync up, I looked around and noticed that the car it was destroying wasn’t lined up with it’s outline. As soon as I moved my focus to the car, I had the puzzle solved. This sort of “avoiding the obvious” strategy became essential time and time again. Whether it was making sure the background formed a perfect grid or matching up the feet of a helicopter to its shadow, the easiest way to solve the puzzle is was often the least obvious.

Another instinct you’ll want to fight is holding your iDevice how you think it’s supposed to be held. All of the images in eBoy FixPix are displayed in portrait mode, but sometimes the easiest way to get things to line up is to hold it at a 90 degree angle.

The range of images you’ll come across here is wonderfully eclectic. In one picture you might be putting leaves on trees, while in another you’re assembling a woman chatting on her mobile phone. Cityscapes, social scenes, giant robots – this game has it all. Much of the fun is in just finding out what the next picture has to offer. With 100 included pictures, it almost seems as if the fun would never stop. Unfortunately, with only 100 pictures, the fun stops relatively quickly. 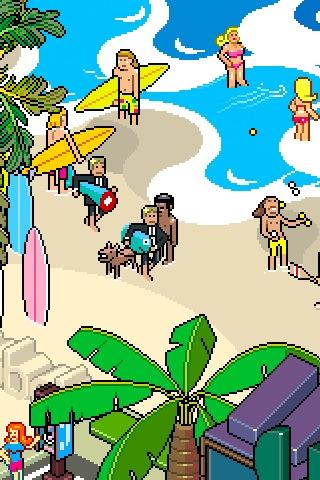 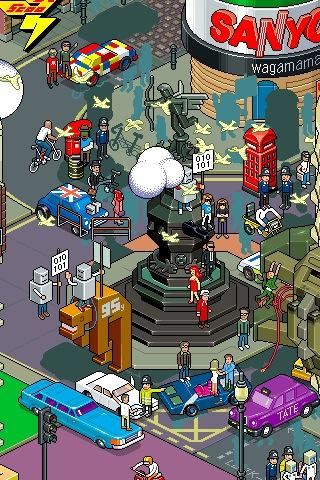 With each puzzle taking no more than 30 or so seconds to solve, most players will easily blow through this offering in under an hour. The gameplay is almost too simple to suffer from any real weaknesses, but if we had to nitpick one it’s that some puzzles require you to tilt your device to an awkward degrees – sometimes so far that you can barely make out what’s on the screen. This simplicity has another fault, too – once you’ve mastered the basic techniques, it becomes incredibly simple to solve almost any puzzle in no time.

Despite the simplicity and the occasional over-tilting requirements, eBoy FixPix offers up a sumptuous visual treat that’s sure to please fans of eBoy’s popular pixelated designs. Completing the game grants you access to wallpapers of all 100 puzzles, which is reason enough to invest in the $1.99 app. It may be simple and it may be short, but eBoy FixPix is also a fun little diversion that offers up more style than Cosmopolitan and MOMA combined.