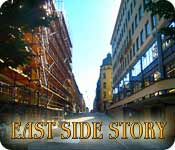 East Side Story is the fourth and newest installment of the Carol Reed mystery series by MDNA Games. Like the other games in the series, East Side Story is a point-and-click single player adventure game where players must find clues, solve puzzles and ultimately unravel the mystery of an unsolved murder.

In the game, you play as Carol Reed, a young twenty-something girl from England currently on holiday in Sweden. Her goal is to spend the summer lounging in her hammock and tending to plants in her lovely flower garden, but the dream is quickly shattered by the news of a suspicious murder that has taken place in the nearby town.

Carol receives a letter from a friend of hers who is traveling through Paris. The letter contains the details of an unsolved murder, complete with a news clipping. Apparently, a vagrant was killed in an apartment owned by another friend. The owner of the apartment, Anders, cannot return to Sweden right away and so Carol has been asked to investigate this bizarre case.

You are given Anders’ name as well as his address, but nothing more. It is up to you to use your sleuthing skills to find the clues you need to discover the truth behind the gruesome crime. Head over to the crime scene and let the tale begin.

There is a distinct and noticeable lack of instructions within the game. When it begins, you are staring at the clouds (as Carol lounges in her hammock) with no tutorial to explain the controls and no hints as to what to do. A lot of time can be wasted trying to learn how to navigate the scenes and manipulate items for those who aren’t used to this sort of game. There are no in-game help files to explain the controls either.

That being said, the game mechanics are really quite simple. Arrows at the edges of the screen indicate which directions you can move. A magnifying glass shaped cursor will appear over items that can be examined more closely. Hand shaped cursors indicate that an item can be manipulated, such as turning a doorknob, or picked up and placed in your inventory.

Your inventory is always accessible and can be found by moving your mouse to the very top of the screen. Items within the inventory can be used in various locations within the scenery or combined with other items to create new objects. For instance, at one point, you will need to combine some shoe laces with a fish magnet in order to reach a set of keys that have fallen down into a drain on the sidewalk. You can examine any item in your inventory by right clicking on it as well.

Right clicking in the center of the scene will both pause your game and bring up the game menu where you can choose to load, save, exit, or resume your game. Lots of save slots make it easy to save your game often in multiple locations, which is very useful.

Because East Side Story is non-linear, meaning you don’t progress from level to level or puzzle to puzzle in a neat, organized time line, a good deal of patience is required. You are free to roam about the map and different locations over and over again with almost no hints from the game indicating how to proceed. However, I found that each new clue that was uncovered included enough information to determine the next course of action. Sometimes the hints were rather obscure, but they were pretty obvious for the most part.

You begin in Carol’s garden at her allotment and have only a few possible locations to travel to. At Carol’s apartment, you find the letter about Anders’ and the murder. A new location will open – you guessed it -Anders’ apartment. As you uncover more and more clues, more and more locations become available on the map. Some locations will involve other characters that you can converse with and get more information from. As long as you read everything very carefully and pay close attention to the conversations with the other characters, you should be able to figure out the progression easily enough.

The artwork in East Side Story is quite remarkable. The graphics within the game consist of actual photographs of wonderful locales. You will move through beautiful flower gardens, tree-lined paths through the woods, various different buildings, an old stone fortress and many more eye-catching locations. Almost every scene was photographed in such a way as to give the player a complete 360 degree panoramic view.

The scenery is lovely and really helps immerse the player into the game and storyline. Whether you’re crawling around the abandoned mine tunnel or enjoying the scenic vista from the look out tower, the art style allows you to really feel as though you’re part of the game. There is a lot to see, so be sure to take your time and explore each area thoroughly.

A soothing soundtrack compliments the game nicely, enhancing the overall feel of the game as opposed to distracting from it. East Side Story is longer than the previous games in the series and blended with the great scenery, sound, and storyline, it’s definitely a winner in my book.

One final thought: although the developer states that the game is suitable for ages eleven and above due to the lack of violence within the game, it is important to remember that the story centers around a murder – which seems pretty violent to me anyway. There is a cast of intriguing and often seedy characters to meet as well, including one drug addict currently undergoing methadone treatment. Just bear these things in mind before buying this game for the younger crowd.