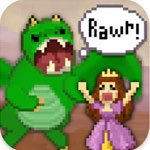 If a critter that's even half as adorable as the chubby, doe-eyed protagonist of Earth Dragon came flapping its way over the nearby hilltops and headed straight towards my castle, I have to admit my first reaction would not be to flee in terror or send archers mounting the parapets to down the incoming beast in a volley of arrows. Such a cute and playful dragon could only be filled with thoughts of friendliness and curiosity, right? Oh no, not this little dragon. He's out for blood and destruction.

Perhaps he watched too many fantasy movies or grew up around an unsavory role model with a propensity towards breathing flame and snacking on local villagers. Whatever the case may be, the little green dragon in this game sets out on a quest to thrash, burn, and crush his way across the countryside. And you get to direct his heartwarming wrath.

Each of the 15 levels you'll encounter generally tasks you with collecting coins, destroying any castles that happen to be around, or some combination of the two. There are also pesky archers who fire arrows and meddlesome wizard that shoot blasts of magic to contend with, and an occasional princess needs capturing from time-to-time. Rarely does the gameplay deviate from this formula, but rampaging through pockets of wary medieval civilization is in short bursts is amusing.

Earth Dragon uses a combination of simultaneous tilt and touch controls that allow you to fly around, deliver punches or stomp attacks, and shoot jets of flame in short bursts. It's a control scheme that takes a little while to get used to, but it definitely makes dishing out the lighthearted mayhem that quickly ensues a unique experience.

Repeatedly tilting the iPhone back using quick movements flaps your dragon's wings and lets him gain altitude. Tilting slightly to the left or right makes him move in the corresponding direction, and sharper tilts send him swiftly diving downward at an angle. New attacks are added to your repertoire every few stages. They include tapping your dragon to smash things, dragging your finger to breathe fire, and swiping downward to make him drop and stomp.

Despite his destructive tendencies, the main dragon character is extremely endearing. His personality and animated behavior really carries the game. Guiding him along on his mission of razing kingdoms can be tricky when juggling the multitude of controls commands, but the unusual input combinations are interesting to experiment with.

However, the one major fault that could completely kill the fun for some players is the game's extremely short length. The first round of levels are basically tutorials on how to play, and later levels are slightly tougher variations. There's a lot of repetition, and the game only really feels like it gets going just as it's about to end. Even at 15 stages, Earth Dragon seems like a great idea of a game that's not quite complete. It's a silly and fun diversion that could really shine with some more time in the development oven.