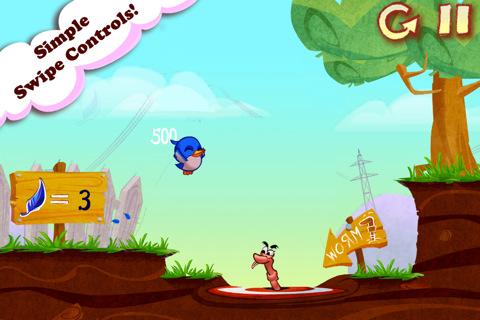 Early Bird Gets the Worm

The current trend of gaming seems to be giving birth to a lot of “birds” games. Angry Birds has inspired a gold rush of sorts on iOS and mobile devices as a whole, but true nuggets of gaming goodness are still a rarity. Developer Booyah! is offering the latest in this avian craze with Early Bird, an arcade-style physics romp aimed at general audiences. Early Bird might be late to the party, but it cuts through the competition to lay claim to the worm.

Early Bird truly represents everything an iOS game should be – it offers ample content, it’s cheap, and it’s fun as heck. The premise of the game is a simple one: move your bird to the bulls-eye in each of the game’s 72 levels. You’ll swipe on the touch screen to make your little blue bird fly, swiping lightly to go short distances, and executing longer, more forceful swipes to fly further. Control is responsive, accurate and intuitive.

The game incorporates hazards such as electricity and thorns, as well as other level extras that give your bird lift or bounce it around the level. There’s nothing particularly new or innovative about what Early Bird does as a physics game; rather, it’s the attention to detail that has gone into the level design that sets Early Bird apart from the flock of other iOS offerings.

Though there are a myriad of ways to tackle each level, there’s usually one optimal approach that will make the physics all fall perfectly into place. The feeling of watching your bird fly effortlessly toward its goal when you hit all the right moves is extremely gratifying. Tack on Peggle-esque finishers that cause the camera to zoom in with dramatic effect as your bird is making a landing on its bulls-eye, and you have an experience that will keep you smiling from ear to ear.

Early Bird also strikes an absolutely wonderful balance with its level of challenge. Each level affords you a finite number of swipes, and you’re graded on your completion time, number of swipes left over, and where you land on a level’s bulls-eye. There’s a chance to earn up to three stars for each level, which of course, carry over to the game’s achievements.

My only disappointment with the reward system is that, aside from unlocking other level areas with a very low star count, there’s not much else you can do with the stars you’ve earned. Online leaderboards make up for this slightly, but it would have been nice to have a more tangible incentive to do better in each level. 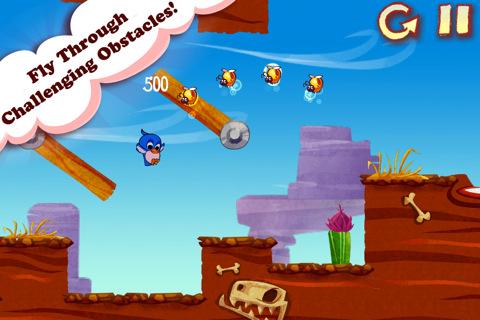 Visually, Early Bird is an attractive 2D game casual gamers can appreciate. The game offers a lighthearted premise and a cute sense of humor. The frame rate is smooth, and the three level areas offer a decent amount of variety. The aural presentation is even more endearing, with sound effects and music that are upbeat and playfully chide the player.

Early Bird is an utterly adorable iOS app. The game is approachable, offers plenty of bang for your buck, and the enjoyment you’ll get out of playing through its many levels is priceless. I do wish earned stars were currency I could do more with, but for the asking price, Early Bird is about as good as mobile gaming gets.