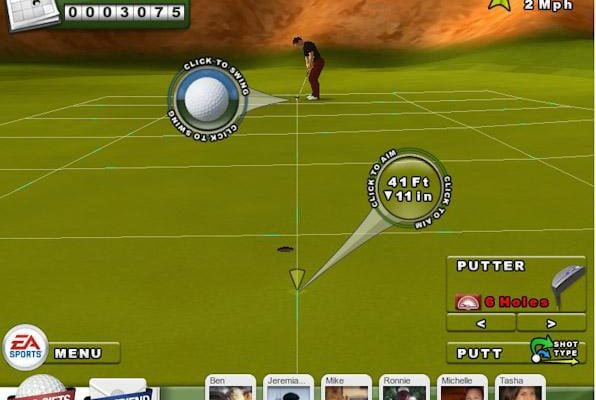 Taking a cue from last year’s earlier Tiger Woods’ PGA Tour Online but ditching the series’ ill-starred club-swinger for a safer anonymous title, EA comes pretty close to making the perfect Facebook golf game with EA Sports PGA Tour Challenge. Whereas previous EA Facebook games like Madden and FIFA Superstars focused on management at the expense of actual play, PGA Tour Challenge places golf at front-and-center thanks to the increasingly popular Unity engine. Fans of the browser-based Tiger Woods game may bristle somewhat at PGA Tour Challenge’s simplified gameplay mechanics, but most casual users will enjoy the quick daily challenges and leaderboards that this new outings brings to the green.

Gameplay is currently heavily fixed on the Daily Challenge, which allows users to play on three holes on one of a number of well-known courses (along with one fantasy-themed course) in order to beat their friends for cash and bragging rights on the leaderboards. This is free to play and more than justifies hours of playtime, but the money you win from the Daily Challenge is indispensible for iron upgrades and the “Course Play” mode, which allows you to play on a full 18-hole golf course. The cheapest of these full courses costs 10,000 game coins to play, however, (which is every bit as expensive as it sounds), so only the most dedicated casual golfers will likely unlock this feature. 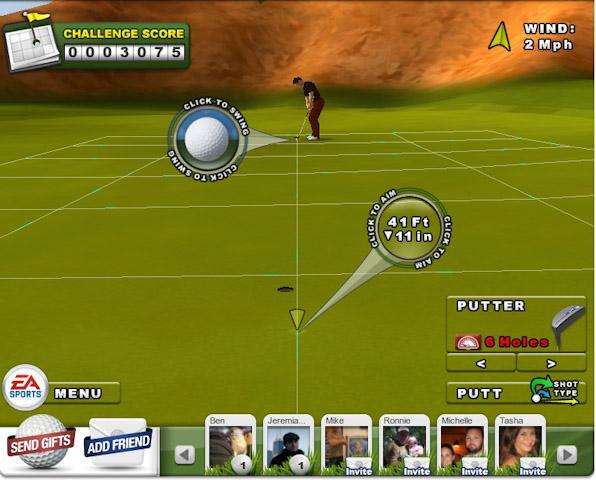 The actual gameplay uses a simple but effective point-and-click interface. For each swing, your golfer can look out at the green and indicate where he or she wants to send their ball by moving a green circle around the course. The circle’s radius becomes smaller and more precise depending on which equipment you use (more on that later), and the most expensive clubs provide almost perfect pinpoint accuracy. Thankfully, EA dumps the complicated swinging controls of other golf games by simply requiring a single click to send the ball soaring. This doesn’t mean that there’s no strategy involved in the drive, however; the difference is that proper placement of the green circle takes the place of said mechanics. For example, moving the green target a little past the hole in strong head-on winds ensures that the ball will likely land where you want it. And just for extra control, a simple “spin” mechanism allows you to control the ball’s direction after landing for the few seconds it’s in flight. The same basic tactics extend to putting, but at a different angle.

Sadly, the tutorial is excessively pushy about getting you to spend money on your irons and other items. For instance, it gives you enough cash to buy a driver that costs 54,500 coins without giving any indication that it will take days of playing to come anywhere near that number of coins again. This is important since irons only last for around 15 shots on average, and these purchasable irons greatly narrows the area in which your golf ball will land after swinging. When your tutorial clubs run out, you find yourself stuck with a disappointingly weak club that extends the width of the green circle target to the width of the entire green. The intention, quite obviously, is to have you run to the game’s store and purchase a better driver that costs around $7.50. And remember, these only last for a few swings. 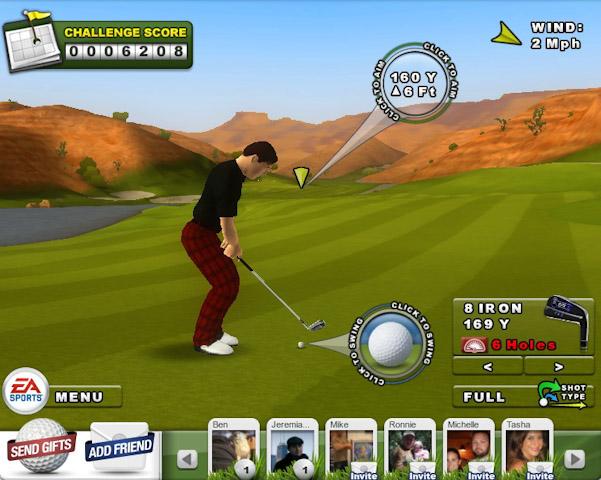 Still, one could easily argue that this wider target area makes the game more challenging and thus more fun. Even without the nine-iron of power, PGA Tour Challenge is accessibility at its very finest, and EA successfully walks the thin line between being too easy and too hard. This is the perfect sports game for sneaking in a few rounds on your work computer with enough strategy to genuinely have something to brag about to your buddies. Best of all, it’s frankly beautiful. PGA Tour Challenge is one of the most realistic Facebook sports games we’ve played despite its nods to simplification, and I’m excited to see how they’ll handle more complex sports such as baseball and football.

Social options are currently limited to statistic-laden leaderboards and the chance to send secret gifts, but an enticing “Play with Friends” mode is on the way along with a “PGA Tour Season.” You can also customize your avatar with purchasable items (although players likely won’t be able to see your avatar until the release of the “Play with Friends” option) and you can even pick up golf balls designed to look like basketballs or soccer balls. 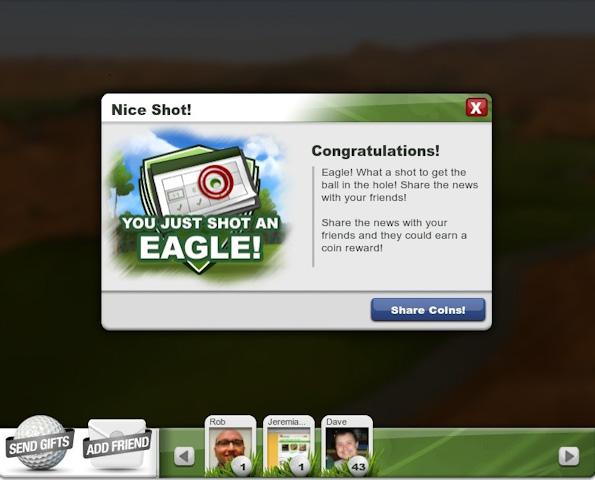 Overall, it looks like EA Sports has scored another winner with this outing. PGA Tour Challenge is miles ahead of many other Facebook games in terms of actual gameplay; and its future content options look to provide an incomparable casual gaming experience. This, in other words, is what a social golf game for Facebook should look like. There may be plenty of other golf games on other platforms the rival it in complexity, but PGA Tour Challenge is a giant step forward for Facebook that almost approaches console quality. Try it, play it, enjoy it. EA Sports PGA Tour Challenge may not quite be a hole-in-one, but it certainly makes par.