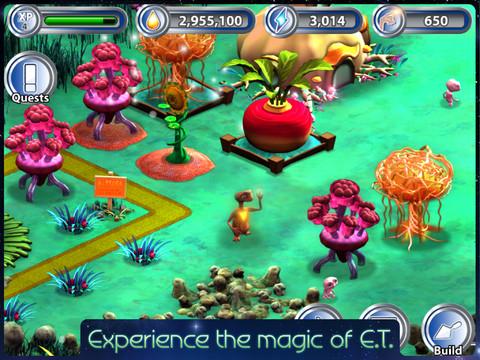 E.T.: The Green Planet certainly won’t crash the games industry again; It’s too busy crashing all by itself.

When long-time game fans hear the initials “E.T.,” they typically gasp and make some kind of gesture to ward off evil. Stephen Spielberg’s friendly little alien didn’t prove so benign when his wretched Atari 2600 game burnt down America’s game industry in the early ’80s. Granted, E.T. wasn’t the only reason for such jolly goings-on, but every disaster needs a scapegoat, and E.T. was it.

But E.T.’s serene face appeared in games after the Crash, and the industry still appears to be standing. In fact, E.T.: The Green Planet is a freemium farming game with some great ideas. Unfortunately, it’s dragged back to Earth by technical issues.

E.T.: The Green Planet begins where the movie left off. After E.T. manages to shake off Elliot, he blasts into deep space and lands on “The Green Planet,” a world teeming with plant life. However, all is not well on The Green Planet: much of the vegetation is diseased, and E.T. needs to find a way to stop the ailing planet’s downward slide.

E.T. is well suited for the job. After all, he knows his plants. You help him out by planting seeds for alien plants and cross-breeding them to produce hybrids. You also need to clear away blighted plants, raise saplings, and decorate the garden (no lawn gnomes allowed).

Raising plants takes large amounts of “nutrients,” the game’s soft currency. Nutrients are necessary for clearing land, growing saplings, and buying soil beds (to grow seeds) and nutrient beds. Nutrient beds are an interesting mechanic: each one can hold a fully-grown plant, and that plant will generate nutrients for as long as it’s cradled. You’re supposed to swap out plants since each species yields a different amount of nutrients at a different rate.

You’re limited to owning a certain amount of beds according to your level. Discovering the best earners amongst your crop definitely adds an element of strategy and forethought to E.T.: The Green Planet—but as a result, earning nutrients is a slow process, and as the game progresses, you need a lot of nutrients to raise complex plants.

Not surprisingly, E.T.: The Green Planet wants you to spend the game’s hard currency—”Healing Touches”—to speed things along. To be fair, you can earn Healing Touches for free when you level up and when you visit friends.

Even though it tries to nab you with the usual pleas for money, E.T.: The Green Planet is quite an interesting freemium game. Raising giant macaw-colored flowers and plants may not sound as exciting as breeding the usual assortment of monsters and dragons that freemium games offer, but there’s something calm and earthly about gardening with E.T. 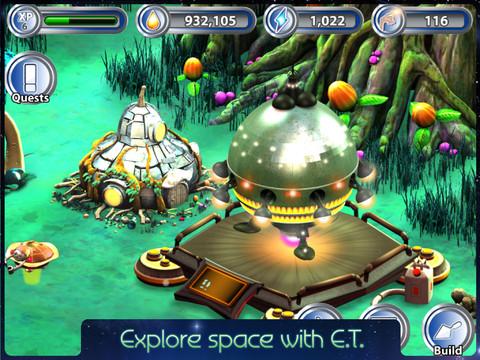 It’s therefore super-unfortunate that E.T.: The Green Planet suffers from technical issues galore. The game frequently crashes on startup, or when in play. There are also problems with lagging and stuttering, particularly when an achievement pops up. The game’s iTunes page states that phones as old as the 3G can run the game, but crashing was a problem even on a freshly-rebooted fourth generation iPod Touch.

Hopefully Chillingo will address these problems in a future update, because at its heart, E.T.: The Green Planet is a game that’s as kindly and warm as the little guy himself.