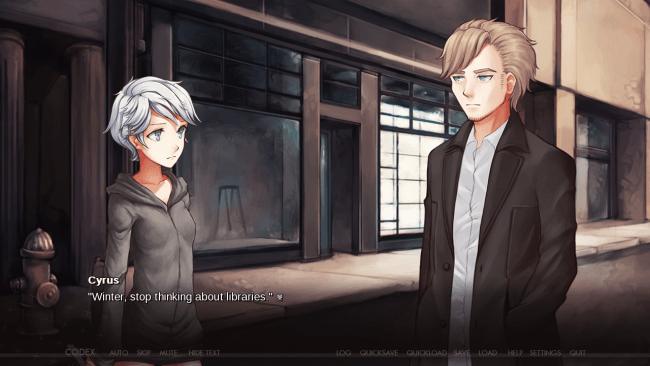 It’s more story than game, but Dysfunctional Systems will suck up your time regardless.

It’s likely rough for developers of interactive novels to hit the sweet spot that falls just in between “interactive” and “novel.” If your novel relays a big tale without stopping to let you make a story selection, it’s not very interactive. On the other hand, all the story selections in the world won’t make a boring game worth playing. If a studio is unable to strike a perfect balance of interactivity and decent storytelling, then it’s preferable to do like Dysfunctional Systems Episode 1: Learning to Manage Chaos and give the audience a solid tale over lots of decision-making.

Learning to Manage Chaos is an interactive novel for PC, Mac, and Linux by Dischan. The story follows a young girl named Winter who trails her mentor, Cyrus, as they visit a planet called Sule. Cyrus and Winter live on a utopian Earth, but both are part of a vocational school that travels to other worlds on other planes in order to manage chaotic incidents that might affect our own world and throw its balance out of whack.

Winter and Cyrus initially visit Sule to observe the power imbalance that leaves one country, Gabrea, prosperous and the other, Brighton, poverty-stricken. It’s supposed to be a routine mission, but things escalate very quickly when the puppet President of Brighton snips his strings and threatens to launch a secretly-developed nuclear missile at Gabrea if the rich country doesn’t adhere to his demands. Cyrus, having experienced this exact scenario on other worlds, intends to quell the chaos with a plan that should work, but at the cost of millions of lives. Winter, on the other hand, wants to find a non-violent solution, even though she knows the odds are against her.

Ideally, you want to help Winter find an amicable solution for Sule’s problems, something that doesn’t involve nuking a bunch of people. Doing so means making correct dialogue choices when prompted; Cyrus, Winter’s mentor, is a stubborn, sometimes unsavory guy, and he’s not shy about reminding Winter that he has years of experience over her.

Learning to Manage Chaos is driven by an engaging story and lively dialogue. It’s easy to get sucked into the heated banter between Winter and Cyrus, which is why you might not even notice that the game’s dialogue trees are a bit sparse. In fact, there’s one branch of the story that will carry you straight along to one of the game’s endings after you make a single choice. These aren’t quick endings, either. You can expect a lot of sitting back and reading, and little thinking. You can also expect some repetition: You’re not allowed to make your first story choice until you’re deep into the plot, and that initial chunk takes time to play out, even if you hit the game’s text-skip button.

Regardless, Learning to Manage Chaos does require some tooling around if you want to succeed, so it’s not a straight-up novel experience. The game’s large and colorful character portraits help immerse you in its tale, too. Regardless of how you feel about Learning to Manage Chaos‘s limited story choices, it’s a good bet you’ll still be looking forward to Episode 2 when you’re done.