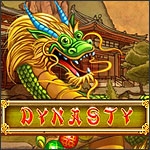 If it looks like Luxor and smells like Zuma, then it must be… a different style of game entirely?

Nothing but surprises here, though: Dynasty, the newest offering from Oberon and Nevosoft, takes the whole ball-bursting, color-matching concept and turns it on its head. Plus, no less, adds a healthy dose of Far Eastern sound effects and imagery, setting the title that much further apart from its contemporaries.

The outing’s first and arguably most amusing singularity – you play a dragon.

Sinuously gliding across the screen, the beast, seemingly lifted straight from a silkscreen or ancient watercolor parchment painting, is controlled via mouse. Picture its head the same way you would the cursor on your desktop. Moving left or right, up or down, causes the creature’s cranium, and lithely trailing body, to respond in turn.

The next shocker, you ask?

Play’s totally at odds with contemporaries such as Pirate Poppers or Birds on a Wire, which demand you use a mounted cannon to eliminate approaching chains of colored balls before they reach set targets. Instead, Dynasty sees you wielding your dragon’s mouth – capable of exchanging the ball housed between its jaws for any on the playfield – to select and swap out spheres instead.

The basic end-game scenario remains the same as in other titles. (Stop strings of balls from reaching an idol’s mouth, or it’s adios, amigos). So do general mechanics: Placing three or more balls of similar color adjacent to one another removes them from the board, causes gaps to automatically be filled and creates the potential for massive combos. But actual play, while fast and fluid as it is in any rival, has the unique distinction of feeling simultaneously familiar, yet also completely different.

Inherently more difficult than its peers, the title requires greater awareness of a larger number of variables. All of which, naturally, is to say it should be perfect for hyper-caffeinated teens and action/arcade game fans.

Casual enthusiasts seeking a relaxing diversion won’t be thrilled with the finger-numbing velocity at which the action operates. Nor will imprecise aiming – accidentally missing and swapping the wrong ball the fifth time in a row can be infuriating – make your day.

But production values are awesome: Note the catchy voice-overs (“Wahw!,” “Super Dragon!”), traditional Asian soundtrack and fluidity with which on-screen objects and characters animate. What’s more, conceptually, the outing’s a feat of genius that upends the standard ball-blasting formula and provides for a worthy diversion in its own right.

The upshot: Dynasty’s designers deserve serious props for their ingenuity and ability to execute on a novel concept. Certainly, the game doesn’t reinvent the wheel. Still, metaphorically, it puts the proverbial screws on tighter and slaps some 20-inch rims on that bad boy.

Give it a whirl. You may be flustered at first, but not, we promise, disappointed.