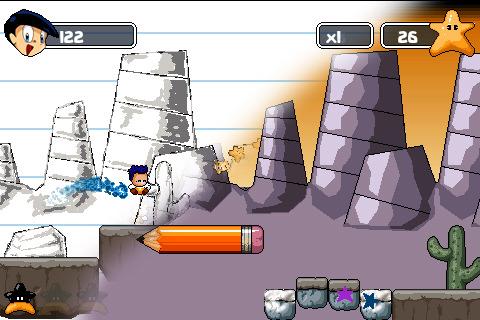 Imagine a scenario where all of the platform heroes of the 1990s were rounded up and placed in a Running Man-style contest. All of their past crutches like multiple lives, power-ups, learnable levels and even direct control are taken away from them. All they’re left with is a forced march through a hastily-sketched facsimile of the worlds they used to inhabit. Welcome to the world of Dynamo Kid Touch.

Of course, Mario, Sonic and co. are nowhere to be seen in OrangePixel’s demanding platformer, but the premise remains. Take the classic cutesy platformer, strip it of all its hand-holding tendencies and force it through a succession of death trap-strewn obstacle courses.

In actual fact, Dynamo Kid Touch bears as much resemblance to perpetual runner-in-chief Canabalt as it does to any traditional platform game. Just like Semi Secret’s masterpiece, directional control is taken out of the equation. All that remains is the requirement to tap your character to make them jump as gaps, hazards and platforms scroll into view.

Well, in Dynamo Kid Touch‘s case that’s not quite all that remains. You also have the ability to interact with the game world directly. As you plod along at a pretty constant pace, loosely-outlined platforms appear. These must be “drawn” into existence with a swipe of your finger, otherwise Dynamo Kid will simply fall to whatever fate awaits platform characters who leave the screen. You must also tap falling boulders out of the sky before they crush our plucky young protagonist.

In addition to such level furniture, you must also confront enemies in a similarly hands-on fashion. You can either tap them out of existence, as with the boulders, or you can jump on their heads in time-honoured platforming fashion. The former’s a far safer bet though.

If all of this sounds a little overwhelming, then you’re right – it can be. Juggling the need to keep DK safe by jumping over gaps, along with the incoming threats of enemies and other hazards is extremely tricky – particularly when you have only one life and no health bar to speak of.

This harsh difficulty level isn’t helped by some occasionally unresponsive controls. Every so often your attempt to jump or draw in a platform goes unheeded by the game. Where this would perhaps go unnoticed (or forgiven) in a regular platformer, here – where the punishment for any mistakes is inevitably instant death and a return to the very start – it’s a little harder to overlook.

One thing that lessens the frustration considerably is the game’s look. Each world is lovingly crafted in a hand-drawn style, with progress gradually filling in the sparse outlines found elsewhere. It’s a charming aesthetic that suits the “drawing-in” premise particularly well. Online leaderboards also provide a nice incentive to keep plugging away in spite of the steep difficulty, as does the randomised level lay-outs and occasional hidden bonus sections.

Dynamo Kid Touch is a decent combination of perpetual-running and classic platforming action. It lacks the honed gameplay of Canabalt and the refined jumping mechanics of Sonic The Hedgehog 4, but the way it mixes elements of the two is never less than interesting.