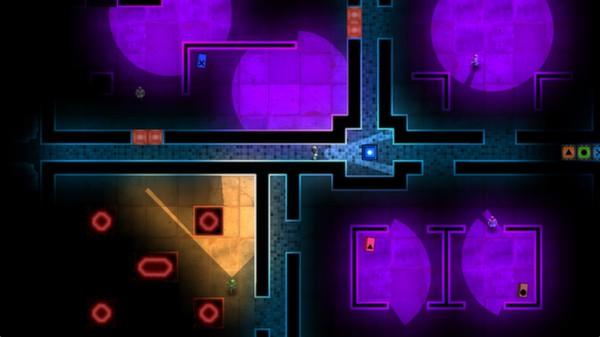 Take one part stealth action game, but give the protagonist an unlimited supply of bombs, and you end up with something close to Dynamite Jack. It’s a top-down 2D puzzle/action game where you play a space marine trying to escape a mine after ditching that whole captivity thing. Being chained down ain’t Jack’s bag, baby. Jack likes to blow stuff up.

The main purpose of each level is to get to the exit. You’ll only have a couple of tools at your disposal: a flashlight and an unlimited supply of bombs. Of course, it’s not just a simple matter of finding the exit; there are some obstacles along the way. Most of the time you’ll encounter guards who patrol their set path and come running when they hear a bomb go off. They’re also carrying flashlights of their own, and you’ll die an unceremonious and instant death by gunfire or laser if you get caught in their cone of light. Feel free to stand right next to them as long as you don’t let more than a couple pixels of your body enter their sights.

It’s also easy to lure the guards into bomb traps that eliminate them completely. Press the bomb button once to place the bomb and then hit it again to blow it up. This prevents you from placing multiple bombs all over the place but allows you ample time to walk to the other side of the level if you care to. The guards and other enemies won’t even notice if they’re standing directly on top of one.

Throughout most levels it’s more than a matter of simply finding and reaching the exit. You’ll collect computer chips and crystals for added bonuses and special levels. Some will even have the old key card business that will unlock passageways to completing the level. It adds a little extra puzzle element and reasons to not just find the exit as quickly as possible, though if speed is your bag, there are leaderboards for you to mark your territory.

Through the early parts of the game the flashlight is only really used to find your way around. Your own cone of light will definitely attract the guards’ attention, but later on it’ll be used to scare away some crazy mutant-ish ghouls that will try to track you down. Of course, a well-placed and simply thought-out bomb attack will take care of them just as easily as the rest.

Dynamite Jack is not something that’s going to test the limits of your graphics card, but its simple aesthetic and finely-polished effects are attractive. It runs great and the controls are spot-on. The game does a great job introducing new mechanics, environmental elements, and enemies at a steady pace but the repetitive nature might wear thin pretty quickly. The easily-tricked AI is probably the game’s biggest detriment, but that doesn’t mean that it’s not fun seeing what sort of traps you can set. There’s still a thrill to be had by narrowly escaping the guards and slipping between beams of light. Some might even say that when Dynamite Jack is at its best, it’s a blast.