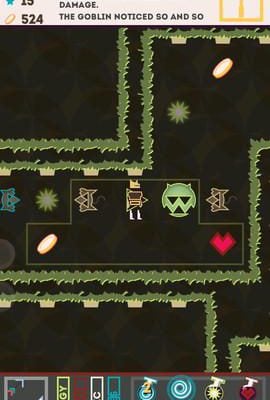 So you’ve emerged from the recesses of the internet and stumbled onto my review, eh? Well before we begin, let’s talk about the actual name of the game here for a second: Dungeonism. It almost sounds like an upper-level class you would take in college to learn about all of the basic fundamentals of dungeon crawling, before you decide to go out and wander around in a dark and murky cave on your own. And in many ways, Dungeonism manages to take these exact fundamentals from every dungeon game you can think of, and ingrain them in a complicated, but incredibly rewarding setup for mastering the basics and performing them well.

At its core, Dungeonism is a tile-based dungeon crawler, where players will simply tap on a tile to have their character move to that position. Attacking is as simple as tapping on a tile that is occupied by an enemy, and you can build up your defenses and recharge your energy by tapping on your own character instead. Even though the game is strictly turn-based, it doesn’t really feel like that at all, since enemies will move and react to your attacks so quickly that you might as well be engaged in a real-time battle here. In fact, I met a number of untimely deaths in mistakenly trying to treat the gameplay like a real-time action title. Everything in the game has been rendered in simple shapes and figures with a very minimalist design, but the presentation works so completely with the gameplay that it all just sort of fits together in perfect harmony. 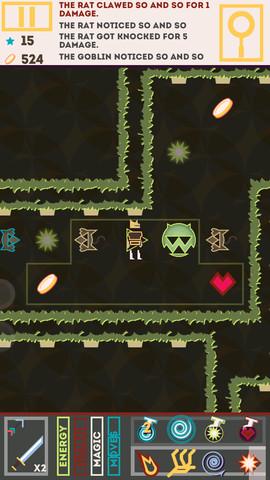 Of course, it wouldn’t be a true dungeon crawler game without tons of loot to find in every shadowy corridor, and you’ll be happy to know that Dungeonism comes fully stocked with all sorts of items and collectables tucked away in the darkest of corners. From coins and XP stars, to health potions, arrows, and instant energy recharge orbs, the developer seems to have thought of everything in making this game a real in-depth and progressive dungeon crawling experience. As you progress in the game, you can spend your hard-found coins on better equipment and more powerful weapons to keep those colorful monsters at bay. In a few certain levels, you’ll even be able to find a secret map, and if you manage to make it out of that dungeon level with the map still intact (and most importantly, without dying), then you’ll be able to unlock an additional dungeon on the overworld map.

The only real downside to the game is that Dungeonism is an incredibly difficult experience, with a steep learning curve and difficulty spike that I for one certainly wasn’t prepared for. Sure, as you play the game more and rack up those deaths, you begin to learn from your mistakes, and better understand how the dungeon crawler is supposed to be played. The problem is that I’m still not sure if I’ve actually been playing the game the right way, even as I’m writing this review: because whatever I’ve been doing in the game, it keeps making me die, and making me die a lot. After each death, you’ll be presented with dozens of instructional tiles which you can flip through to read important tidbits on how the world of Dungeonism works, but a lot of these would have been much better implemented into the actual game itself, and not as a mere afterthought: especially since some of the information they contain, like blocking and recharging, are nothing short of crucial to your ultimate survival. 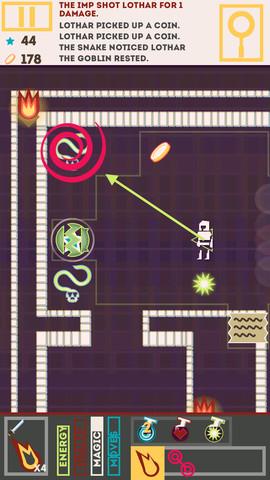 I think another reason why the difficulty spike is so apparent is because the dungeons in Dungeonism are pretty lengthy, and they don’t have any checkpoints in between. When you die, you’re forced to start over from the very beginning, and all the gold and experience you gathered goes away, so you can’t even buy better equipment from the store to make the going a little bit easier. I’m always up for a good challenge and everything, but when it takes me several hours just to stagger through the third level of the game, it’d be nice if that difficulty spike wasn’t so entirely steep (and don’t even get me started on those next-to-impossible boss fights).

But even so, dungeons were never meant to be a walk in the park. That’s why they’re called, you know, dungeons, and not parks. So for everyone who’s always wanted a hardcore gaming experience on a mobile device, while still maintaining that simplicity of design and addictive short bursts of gameplay, then Dungeonism is most definitely the dungeon crawler for you. And if anything, it can always teach you a thing or two about making it out alive.