Tons of stuff to do. Wide-ranging appeal.

Dungeon Village will suck you in, though it’s hard to pinpoint the reason why.

I’m not entirely sure what to make of Dungeon Village. The controls aren’t great, the graphics are cramped and dull, and the single-song soundtrack will burrow into your brain like some sort of instrumental “Song That Never Ends.” On the other hand, the very first time I started playing it, I didn’t stop until my battery died. It’s that kind of game; I don’t know why, I don’t know how, but the more I play it, the more I want to play it.

And that’s no lie, folks. My first trip to Dungeon Village was meant to be a quick peek, a way to get familiar with the controls and the feel of the game with a look at the instructions and a few minutes of poking around, but some hours later I found myself staring at my phone’s “battery low” warning. 20 minutes after that, a rather more insistent, “Seriously, dude, we’re done,” message popped up, forcing me to quit. And I looked at the clock and thought, “Oh.”

What makes that response really interesting is that I was pretty sure I wasn’t going to like this game, a feeling reinforced by the first few minutes of play. The music is grating, sound effects are minimal and primitive, the visuals are blocky and blurry and everything on the screen is tiny and crammed together. It’s easy enough to zoom in and out to get a closer look at the action but that just makes it all even uglier, and while the game offers a sort of “virtual controller” as an option for playing in portrait mode, neither that nor the conventional touch screen controls are particularly good, again in large part because everything is so tightly packed. I still haven’t got the hang of selecting individual buildings in my village quickly and easily, and watching me try to place a new building is very much like watching a kitten batting at a house fly.

But all of those complaints run up against the fact that I keep playing it, and more to the point, that I want to keep playing it. The underlying game is just that good. 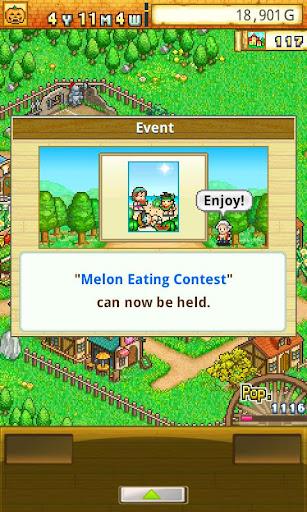 In spite of its apparent simplicity, Dungeon Village actually has quite a lot going on, although it’s not complex so much as it is flat-out big. The name of the game, in case you’re not familiar with it, is to build a tiny fantasy village into a thriving metropolis that will attract adventurers, who will explore the surrounding countryside, battle monsters and clear out dungeons. The twist is that instead of being the hero, you’re the guy behind the counter, making sure the heroes are fed, rested, equipped and happy.

Your village begins with only the barest of necessities, just enough to attract one or two visiting adventurers. As they spend money at your inn, armor shop and elsewhere, resting and recuperating from treasure hunting and monster slaying, your treasury will grow, allowing you to build more and better facilities and also to reward the heroes with gifts, increasing their satisfaction and the likelihood that they’ll choose to become full-time residents. As time passes, your village expands, the quests facing your adventurers become more difficult and the challenge of keeping everything running smoothly and efficiently grows increasingly demanding – to a point. 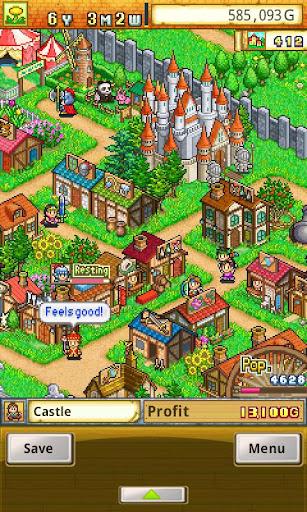 Information management in Dungeon Village isn’t handled particularly well, although to some degree that’s an unavoidable consequence of having so much happening on such a tiny screen. But even so, it’s not really a problem, because the game isn’t all that terribly difficult. It’s quite possible to build up a hefty pile of gold by simply letting it run unattended (with the charger plugged in), as long as you touch the screen every now and then to clear off game-pausing notifications. You may not achieve a great high score that way, as the game “ends” after 16 in-game years and letting time just float by won’t do much to rack up the points, but it also means that people who prefer a slow, relaxed approach to gameplay can get as much out of this as hard-driving strategy nuts.

Regardless of how you play, developing an effective strategy will be largely a matter of trial and error, because Dungeon Village doesn’t do a great job of explaining itself. It’s not brain surgery and a very basic set of instructions is built into the game, but any detailed questions, like how to assign specific adventurers to a quest (as far as I can tell, you can’t) or the differences between a Sparkee and a Maskoro (all the “monsters” in the game are distressingly cute, and polite, too), are likely to go unanswered.

But that’s okay, because figuring it out is half the fun and Dungeon Village isn’t the sort of game that will punish you for failing to grasp things right away. You’re just as well off to jump in, put the pedal to the metal and flip back to the instructions if and when you need them. You probably won’t; remember when I said I was going to check it out when I first started the game? I never did. I couldn’t stop playing.