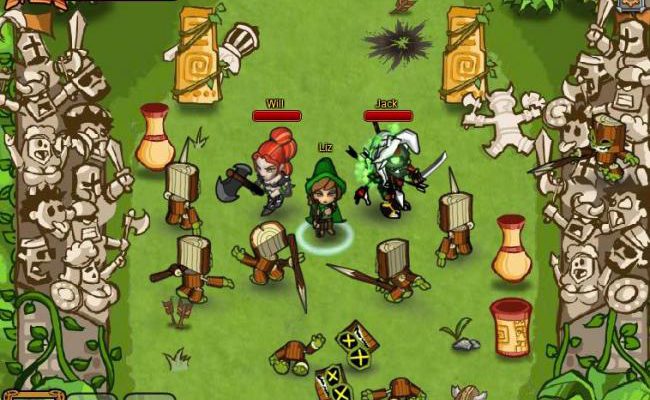 Kick monster butt with your friends!

You know the old adage about not judging a book by its cover? That doesn’t apply to Dungeon Rampage, the Facebook fantasy action RPG from Rebel Entertainment. It’s all about grabbing some weapons, teaming up with other players and bashing your way through as many monsters as possible to reach the end of… wait for it… a dungeon. Subtlety? Sorry, fresh out!

There is a story of sorts to Dungeon Rampage, involving a girl seeking revenge against an evil wizard and his horde of monsters for wrongs committed against her stuffed animal. That’s really just secondary to the reason the game exists, which is to have teams of warriors clear out dungeons full of baddies for fortune and fame. You start out with just one class available, the Berzerker, which is your standard barbarian type who uses axes, hammers and heavy thrown objects to take the direct approach to eliminating enemies.

Movement is controlled with either the W-A-S-D keys or the mouse, and three different weapons can be mapped to other letter keys. The controls are responsive enough though a little crowded on the keyboard. You’re going to be bashing away on them most of the time anyway, as monsters often come at you in waves. There are traps like swinging blades, fire and arrows to avoid, and boss battles finish off certain levels. 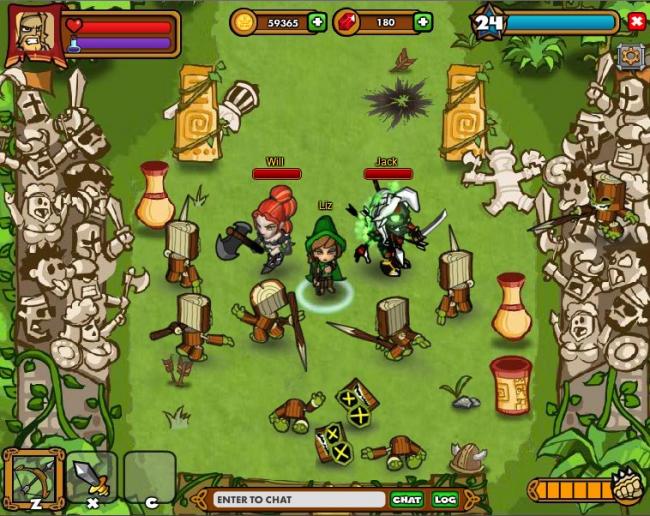 Fortunately you don’t have to go it alone, as two other players will battle by your side. The friendless will get two random people to help out, but there is an option to enter the dungeon with only your buddies as wingmen, which is a nice touch. In fact, up to four people can play together at any given time. You don’t have to be Facebook friends with people to add them as in-game allies either. A limited but effective chat window can help you coordinate while in the thick of the action, and it actually comes in handy for things like standing on pressure plates to deactivate traps in the correct order. Some treasure is every man for himself, but the big treasure chests are shared by all players, which encourages cooperation over competition.

Those treasure chests hold the game’s best loot – weapons, and lots of them – in four different levels of rarity. You need the right key to open each chest, and more can be purchased for coins found in the dungeons. Coins can also buy you weapons and unlock more character classes (like the bow-using Ranger, the spell-hurling Sorcerer and the no-adjective-needed Battle Chef), though most items are more easily purchased with Gems, the game’s premium currency. Gems can only be acquired by spending real money, making Dungeon Rampage one of the trickier freemium games to actually play for free. On the flip side, there’s no restraining resource keeping you from playing as much as you want, so it’s a bit of a trade off. 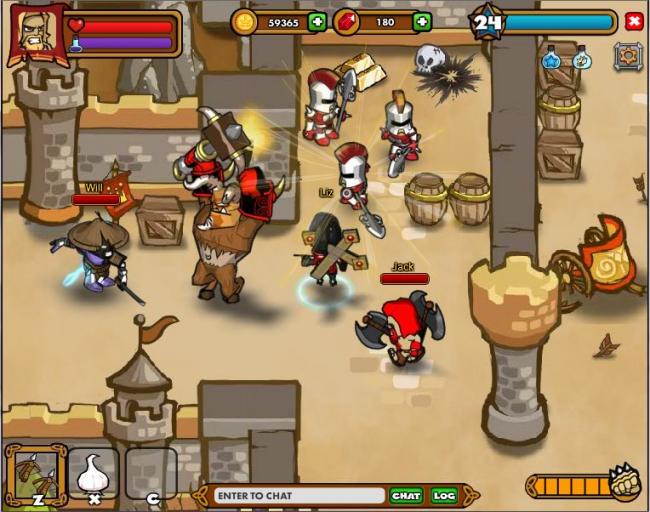 Characters have four attributes that can be increased using Training Points earned as they level up. The attributes are different for each class and correspond to their play styles, so while the Berzerker can increase melee power and maximum health, the Ranger can choose to boost shooting speed and movement speed. It’s not the most in-depth RPG system around, but it’s more than sufficient for this type of game.

The cartoony graphics add a lighthearted touch to the carnage, and there’s a welcome variety of different environments and locales as you fight your way through the multiple “leagues” of dungeons. A low detail setting is available to increase performance if necessary. The sound effects are loud, bordering at annoying at times, but it’s fun to hear the animated crowd cheering on your characters as if it was a spectator sport.

If you’re looking for something complex or deep, (channeling Hulk Hogan voice) well, brother, you’re probably in the wrong place. If you just want to team up with other players and hack your way through tons of monsters, Dungeon Rampage should beright up your alley. Get yourself onto to start hacking.