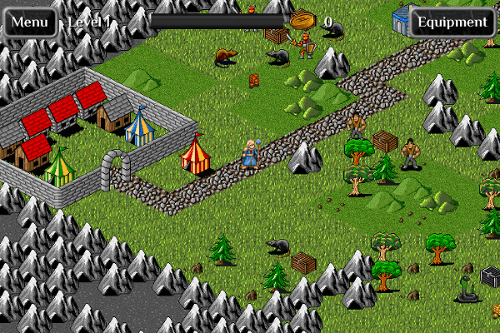 When the free dungeon crawler Rogue was invented in 1980, I doubt anyone imagined it would spawn a host of spin-offs legion enough to last over 30 years and invent its own genre. But it did. Its impact is seen everywhere from blockbuster hits like the Diablo series to more modest iOS games such as Dungeon Plunder.

In this latest Roguelike title you create a warrior, wizard or rogue character and set forth into the wilderness to stop an evil wizard from freezing the world in eternal winter. The plot might be stolen from Narnia, but the etiquette isn’t as you slaughter everything in sight and steal treasure to spend on equipment upgrades. Combat is handled with a slot-machine mechanic where you randomly spin and match symbols to deal or heal damage.

Over the years, what constitutes a Roguelike game has come to be enshrined in three principles. Firstly, when you character dies, that’s it: game over. Second, it’s turn-based, so no real-time clicking action. Third is procedural generation so that the map and its inhabitants are different on every play.

Dungeon Plundertakes each of these three things and twists it to the limits of endurance, pushing the envelope of what it means to be a Roguelike, but making it friendlier to the casual player in the process.
So if you die, you will indeed need to start anew. But to soften the blow you get to keep a lot of the gold and the best magic items your last character found. Plus you’ll get some life scrolls and “runes,” permanent upgrades that work across all your characters. That’s if you actually die in the first place: by sticking to enemies the same level as you, the game remains fairly easy most of the time.

And ensuring you keep picking on the weakest monsters around also remains fairly easy because although the game is turn based, you’re the only thing in it that moves. Monsters are fixed in place and don’t even so much as blink. So you can manage the level of risk as you choose, and never need put yourself in any danger whatsoever.

Finally, the static position of those monsters and their loot on the map are the main thing that’s procedurally generated. The important features of the map itself remain very similar game in, game out. Shops and dungeon entrances are in the same place each time, as are the little tents and castles that hand out identical “kill X of Y” quests for a reward.

There are other key differences too. Inventory is handled automatically, for example, and aside from the occasional magic item consists entirely of weapons and armor. This is in stark contrast to the highly complex item and inventory system in most Roguelikes, where learning to manage and balance the various items and their powers for best effects is a key part of the challenge.

Combat is completely distinct, replacing the usual tactical maneuver approach for a slot machine. Initially this seems like a really bad idea, being highly random and slowing the game down. But it’s actually pretty quick and pretty fun. It’s where the three classes play differently, the Rogue and Mage requiring a little more intelligence than the burly Warrior, but there’s some depth to fighting with all three.

It’s still a far cry from the level of planning needed in other Roguelikes, though. And here, essentially, is the problem with Dungeon Plunder. It’s been so stripped back in an attempt to appeal to the casual market that there’s virtually no game left. Without tactics, or tension, or the challenge of the unknown, all that’s left is spinning reels and the gradual accumulation of treasure. 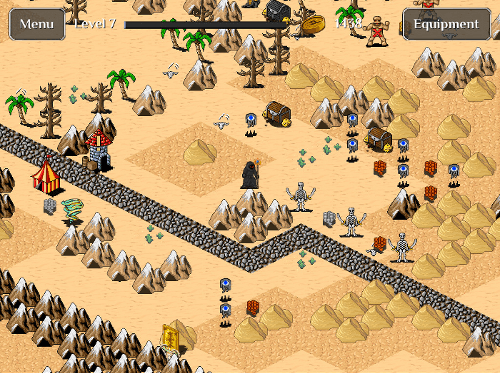 However, as anyone even passingly familiar with role-playing games will know, the appeal of mass monster murder in pursuit of magic items and skill levels can be incredibly addictive. It’s a key part of the Roguelike package and, thankfully, it’s survived Dungeon Plunder‘s simplification largely intact. The allure of just one more minute of play, or one more encounter remains terribly potent, even when the game behind it is relatively hollow.

Dungeon Plunder is a reasonable introduction to the Roguelike genre as a whole, but there are better examples available for only a little bit more complexity. It’s almost annoying that the addiction level remains undimmed. After an hour of repetitively encountering monsters and plating slots to get gold and experience, you start to feel a bit like one of Pavlov’s dogs. But you’ll still do another hour. I did. Now, where did I put that Wizard?