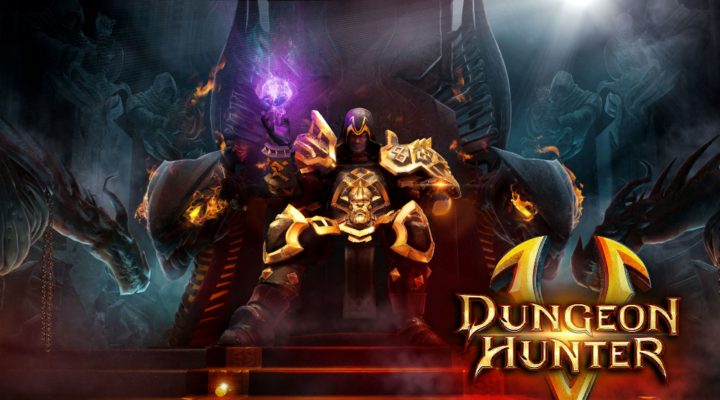 Visually impressive gear and plenty of options for how to kit out your character.

Props for trying something different with the PvP.

Unfortunately, this game's PvP isn't that fun either.

System for improving gear leaves too much to chance.

Forced social aspect and some other irritating, if common, mobile RPG trappings.

It’s something of an accomplishment for Dungeon Hunter 5 to even exist. I’m not talking about any behind the scenes drama in making the game, simply pointing out that Gameloft had to be doing something right to get to the fifth game in the series. The trick, of course, is to walk the tightrope between keeping things fresh and building on previous successes, and that’s something this entry doesn’t quite manage to pull off without a stumble or two.

Let’s start with the stuff that Dungeon Hunter 5 gets right. It’s got a compelling story, with your character unexpectedly thrust into the leadership position of a guild of bounty hunters. Your interactions with NPCs are all voice acted, and set over the game’s dramatic music, it’s a rich backdrop. The graphics are also pretty nice, and while the armor designs borrow from the look of the Assassin’s Creed games, that’s not a bad thing in my opinion.

You don’t have different character classes from which to choose, but you can modify the way your character fights by choosing different weapons, from swords to crossbows. There’s also an elemental component to all of your weapons and equipment, as the game uses the rock-paper-scissors relationships from card battle games as an inspiration. It’s kind of an awkward fit for a fast-paced action RPG, but since you can have multiple loadouts saved and even switch weapons (but not armor) in the middle of levels with a single tap, it works out fairly well. 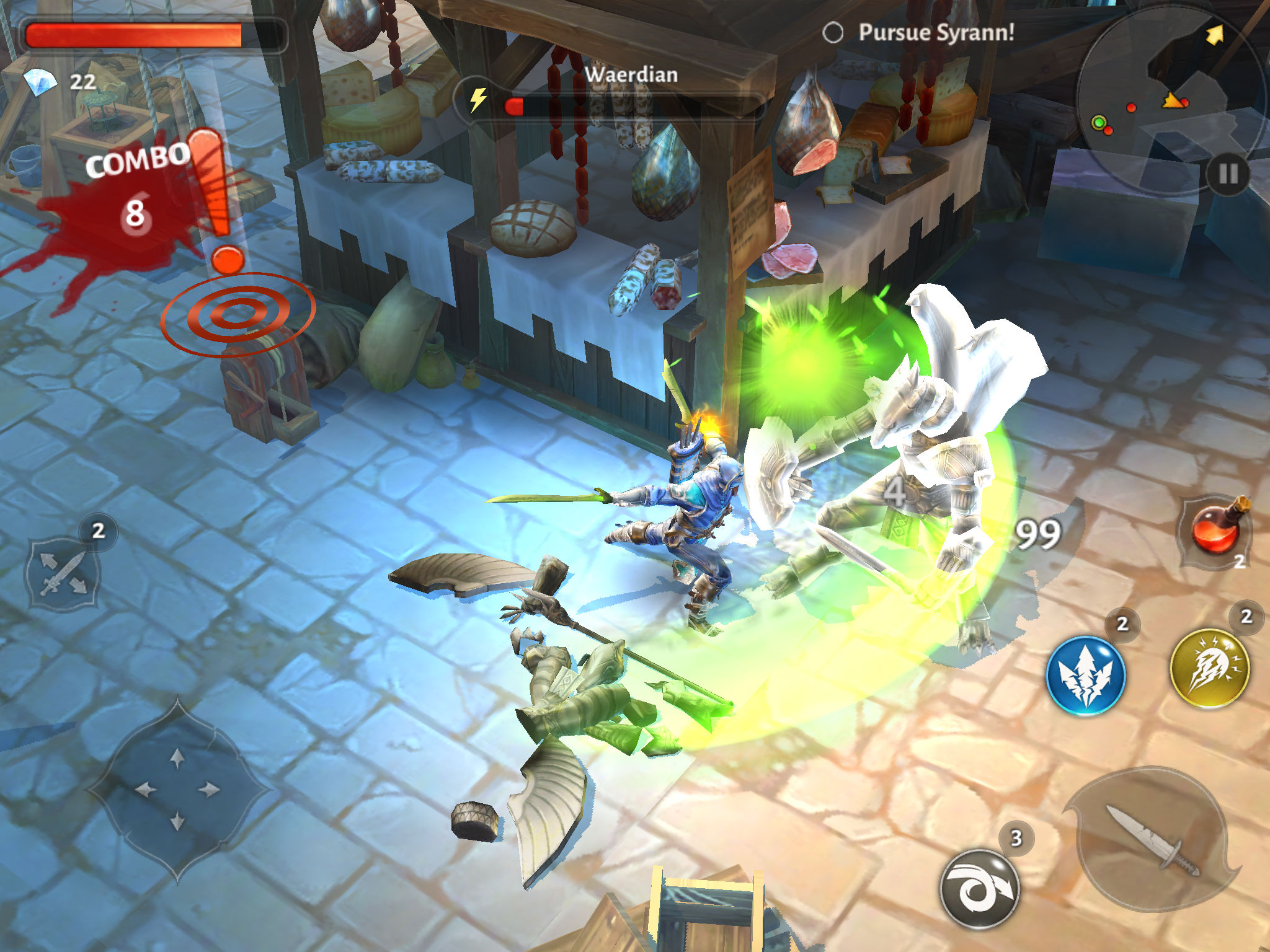 Combat is fun enough, as you tear through enemies with your weapons and a variety of special abilities that depend on the items you have equipped. The result is a lot of flexibility, held back only be the controls. While the virtual thumbstick and buttons are passable, there are times when you’ll wish they were more responsive, and there are times you’ll activate abilities only to find you aren’t facing in the right direction because of it.

Dungeon Hunter 5 ditches the real time multiplayer of its predecessor, which didn’t work all that great anyway, but what it substitutes instead is a double-fisted dose of depression. The first component is a forced social aspect in order to earn better loot. After the first few levels, you’ll be able to bring a friend or random player’s character along with you as backup. With a friend, you’ll earn multiple Bounty Tickets, but a random helper gets you only one. Chests of extra loot cost 10 Bounty Tickets to open, so it behooves you to make pretend pals.

Competitive PvP exists in the form of a Stronghold game, where you have a certain number of fixed points in your base where you can leave traps or monsters to prevent other players from raiding your base for gold. You can do the same thing in return, but the whole enterprise isn’t all that great — it’s like a poor man’s version of The Mighty Quest for Epic Loot — so it only gets points for trying something different, not actually sticking the landing.

A few other things chafe just a bit as well. There are separate energy systems for the base gameplay and Stronghold raids, plus a multiplayer “town” that really serves no purpose. The chat window in town is often filled with inane conversation, and while you can reduce it to just two lines, you can’t get rid of it altogether. These are all pretty common features in mobile RPGs these days, but that doesn’t mean I’m required to appreciate them. 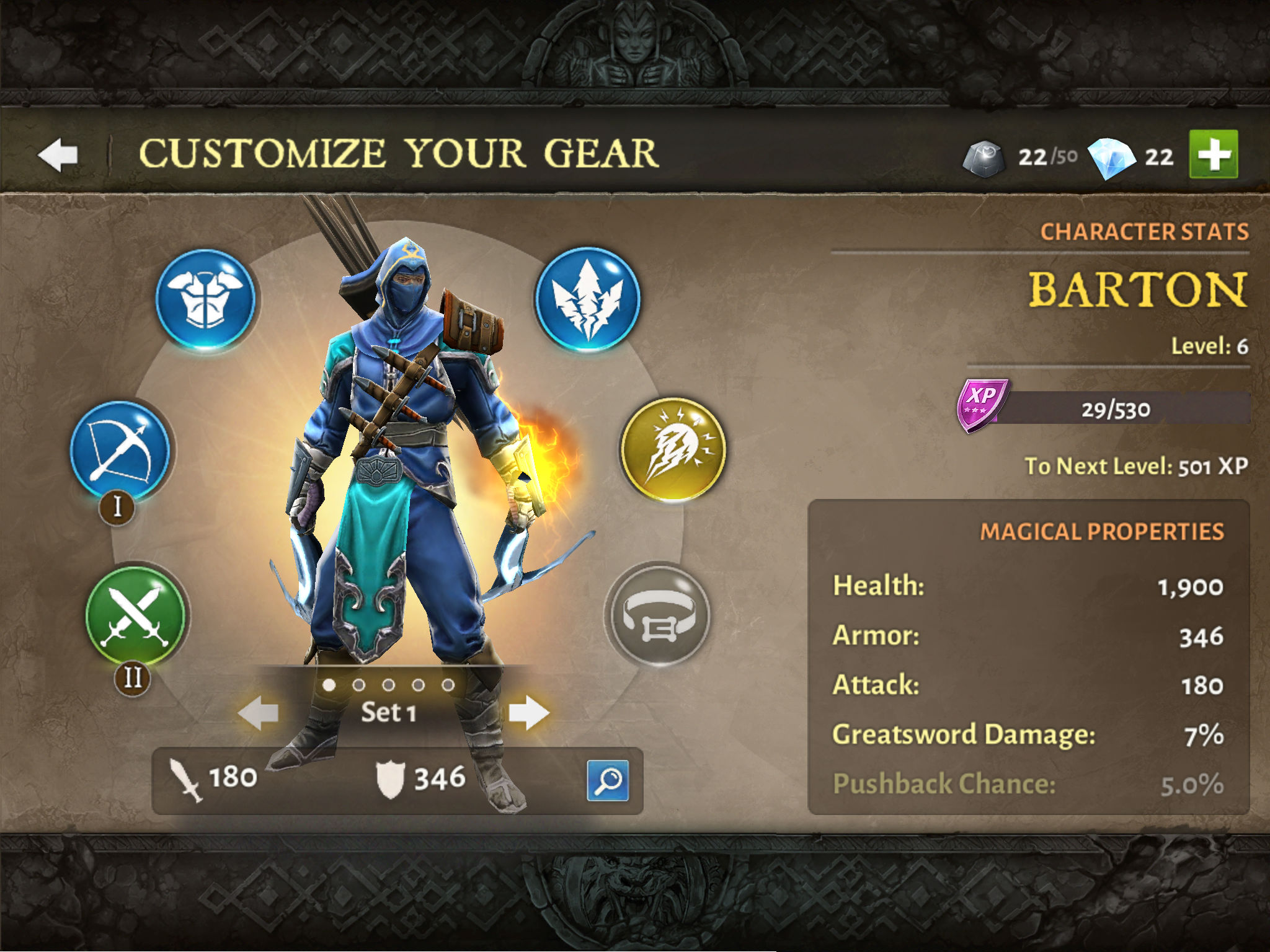 My biggest frustration is with the gear system. While it all looks cool and the amount of variety is impressive, it’s far too random to get what you want. That’s because it’s based on a card-style fusion mechanic, meaning that for maximum effect, you’ll need to make multiple runs through completed levels to gather more loot of the same element. Forced grinding is the worst.

I applaud Gameloft for continuing to tinker with this series so it doesn’t get too stale, but the combination of less characters classes, little control over your gear and an uninspiring PvP element combine to knock Dungeon Hunter 5 down a peg. It’s not going to kill off the series or anything — it would likely take a total disaster for that to happen at this point — but it’s not going to be my answer if someone asks, “What’s your favorite Dungeon Hunter game?”

Five games in, I feel like that could actually happen.