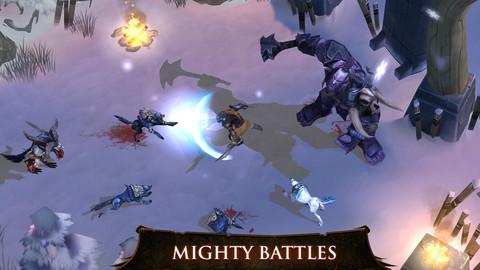 If there’s one thing that should be added to life’s list of certainties alongside death and taxes, it’s the fact that dungeons are going to have monsters that need slaying. Three Dungeon Hunter games didn’t get rid of them, so Gameloft is giving it another go with Dungeon Hunter 4, a free-to-playaction-RPG that takes the series back to its roots while attempting with mixed success to add some new ingredients to the monster-fighting stew.

Strangely, Dungeon Hunter 3 didn’t include any actual dungeons. The new game rectifies that pretty quickly, but not without a tutorial that explains the backstory and familiarizes you with the game’s controls. This time out, you become one of the Valen, a once proud race whose land of (wait for it…) Valenthia has been laid low by the return of demons from times past. With the king killed in his own castle, it’s up to you to rally the survivors and figure out a way to banish back to whence it came – or at the very least, somewhere other than Valenthia.

You can do that as one of four classes: the heavily armored Battleworn, dual-wielding Blademaster, magic-hurling Warmage or bow and trap specialist Sentinel. The melee classes are easier to use than the ranged ones with the game’s fairly standard virtual thumbstick and button control scheme, but you get two character slots to find the right match to your play style. Customization comes primarily through gear, which we’ll get to in a bit.

Both your character and the NPCs of Valenthia are fully voice acted, giving the story more weight than in previous entries in the series. Most of the interactions are fairly short though, as this game’s bread is buttered with fast, fluid, bloody battles against tons of enemies. Regardless of class, you get a nice mix of basic attacks, special abilities and spells to help you mow down foes. Leveling up increases your basic stats and gives you a point on spend on an ability, and you’ll eventually be able to have several active and passive abilities from which to choose.

Loot drops come in the form of gold and gear, particularly after defeating bosses. Weapons and armor pieces come in tiers, and all gear can be upgraded several times by spending some gold and waiting for the proper amount of time. Upgrading also adds a slot for a charm, a.k.a. a magical stone which grants a bonus of some kind (extra damage, critical hit percentage, healing, etc.). Charms can also be combined with others of the same type to form more powerful stones, but they can only be fitted to gear that has slots of the appropriate shape.

There’s even a very basic crafting system that allows you to craft class-specific weapons and armor simply by gathering the right materials, paying some gold, and waiting. The further you go, the more you’ll be waiting for upgrades, charms and crafting to finish, and you’ll get the feeling that the game wants you to spend some money on Gems to speed everything up. And let’s face it, that’s probably the point.

Along with solo dungeons and encounters with monsters out in the world, Dungeon Hunter 4 adds co-op and group PvP zones. At least it tries to, because my experience ranged from slightly laggy (in the co-op survival zones) to almost unplayable (most of the time in the PvP arenas). The co-op feature is still useful to get through the otherwise difficult survival areas that send wave after wave of enemies after you, but the PvP is best left alone until the kinks get ironed out.

Graphically, this is the best looking Dungeon Hunter game to date. The developers re-used some of the interior locations, especially underground, but I’ll take quality over quantity any day. Even the more expansive areas outdoors manage to contain all of the action since the camera zooms out and back in as necessary. The demons look fearsome, channeling the Games Workshop feel somewhat, and the gear looks cooler as it gets more powerful.

Getting back to what the series did right in the first two games was definitely the right move. Despite the multiplayer missteps, Dungeon Hunter 4 is a fun way to let off some steam by slashing or blasting your way through a horde of enemies. And as we all know, it’s not like the fantasy worlds out there are going to be running out of dungeons any time soon.