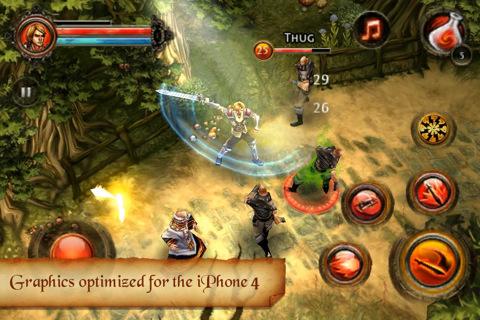 Think you’ve got it bad when it comes to sibling rivalry? The protagonist of Gameloft’s new epic RPG has been locked away in a fetid dungeon by his own brother, who then proceeded to learn the dark arts and take over his father’s kingdom of Gothica. Now do you think you’ll be sending your embittered kin a Christmas card?

As all good adventure tales go (including the first game in the Dungeon Hunter series), you start the game when you’re freed to right the wrongs of your family. Having been informed that you share the immortality of your father (the hero of the first game) and tyrant brother, you head off with a wizard and a fairy to see if reports of your brother’s looniness have been greatly exaggerated.

Suffice to say they haven’t. But let’s not get too ahead of ourselves here – the first thing you have to do is decide what sort of warrior you want to be. Do you want to be a hulking Conan wannabe (Warrior), a nimble Aladdin wannabe (Rogue) or a Lightning bolt-chucking Merlin wannabe (Mage)? Whichever path you choose, you’ll have a further decision to make later on in the game when you can take your character in one of two specialised directions.

If you’ve played the first Dungeon Hunter (it’s really not essential that you do), you’ve probably realized by now that Dungeon Hunter 2 follows the same traditional action-RPG template. That means that you run around a fantasy world hammering the attack button to conquer bad guys (who range from mythical beasts to common thugs) and scooping up any loot that you find on their defeated bodies and in chests.

You’ve got a choice of controls here, but the default virtual controls are the best. This gives you a simple virtual analogue stick for movement and a series of virtual buttons for the various attacks at your disposal.

As you defeat enemies and complete quests (either the main story-driving sections or the various side quests that you can choose to take or ignore) you gain experience points, which go towards levelling up your character. When this occurs you get points to spend on core abilities such as endurance and dexterity, as well as special attack skills that are unique to your class.

Combined with the hundreds of weapon and armour types available to be bought and found, the character development element of Dungeon Hunter 2 is enormously compelling. Indeed, it makes up for the inherent repetitiveness of the button mashing combat. 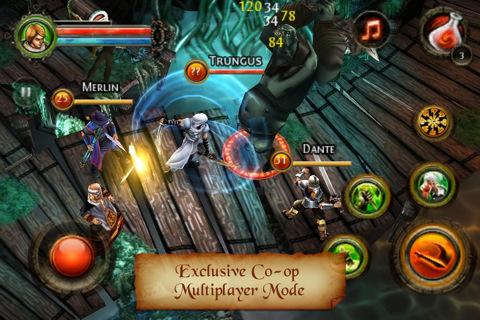 Another thing that smoothes over any hints of repetition is the world you find yourself in. The environments are lush and bursting with detail, with gnarled roots and streams of light lending even the dankest areas real colour. Despite the generic nature of this fantasy world, it has sufficient style and variety to make you want to explore it.

Which is a good job, as Gothica is a sprawling world with many hours of gameplay locked away in it. Once you’ve finally completed it – or perhaps concurrently with your single player campaign – you might want to check out the new co-op multiplayer mode, which allows you to run through the game with a second player over Wi-Fi or Bluetooth. It seems this is only available on 3GS-level devices and above though, which is a shame.

Still, Dungeon Hunter 2 is a meaty, rich delight of an action-RPG. While it doesn’t really do anything new with the genre, and offers only incremental improvements over the original, I felt far more compelled to explore its universe than those of similar titles. Even more importantly, it attains a level of depth that’s simply not that common in iPhone games.

For all of these reasons and more, Dungeon Hunter 2 is among the finest adventures to be had on any smartphone platform.