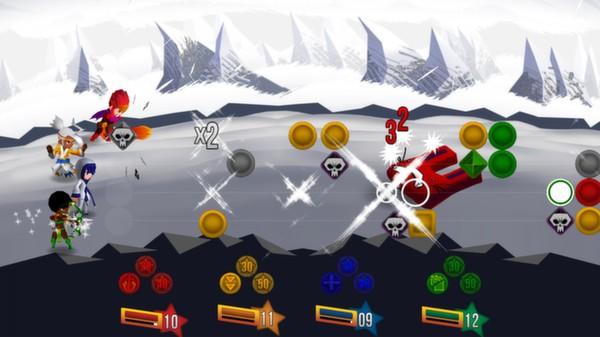 Total eclipse of the heart

In what is a sentence that I’m about to have taken wildly out of context from this point onwards, the “match-3” sub-genre shares a key similarity with the works of William Shakespeare. That being: it’s at the focal point of people’s obsession with “reinvention.” In the same way you’d be hard pressed to go watch a performance of Hamlet today without hearing about the bold choice to set it in a dystopian future or the wild west, each new jewel, orb, or color-matching release comes complete with a twist.

In many ways, of course, this is wonderful. Games like 100000000 and Puzzle Quest stand out as symbols of the way developers have re-envisioned casual gameplay through a creative lens. With that said, you can only “breath fresh air” into a concept so many times before that air becomes stale. So when stellar indie publisher Devolver Digital reached about Dungeon Hearts – a match-3 so supposedly innovative that it took only one pitch on a bus at a gaming conference to sell them on distribution – I was fascinated to see if there was more than buzzwords at work.

Developed by indie studio Cube Roots, the game’s name says a lot about the passion at play. This is an alter-genre love letter to classic RPGs, just as interested in remembering them fondly as in lampooning them passionately. Taking control of four fighters who are more animated archetypes than characters – the warrior, the monk, the mage, and the archer – you run persistently from the left side of the screen to the right on a quest to conquer the appropriately named “Dark One.” In between you and your noble ends, however, are his evil denizens: legions of monsters, mages, and fantasy creepy crawlies you have to surmount first.

In place of menu-driven magic-wielding, though, the game places your party and your foes at opposite ends of the screen and lays a “Fate Stream” down on the field – a music-sheet lookalike across which colored circles are constantly travelling from left to right. By dragging three like circles together and clicking  or tapping to “activate” the trio, each grouping turns into a medallion that can be set off, causing your party to attack the scourge in front of it. Setting off matched colors on the same Fate Stream line as the party member they represent increases your attack power, chains into large combos, and destroys enemy colors coming your way – which need to be cleared lest the enemy get an attack off on you as well.

Creatively, it’s hard not see why Devolver scooped this one up. This is a world I want to play a full length RPG in! Each (quite literally) colorful character feels like an expertly boiled down version of all the loveable stereotypes you met in the RPGs of your childhood – a modern day Golden Sun cast waiting to happen. And generic though it may be, the “plot” serves as the perfect excuse to show off Cube Roots’ enigmatic visual style; each enemy, background, and action stands out as a cleverly imagined, hyper-neon take on the genre. Fitting, in that the game’s 80s-inspired soundtrack is easily the standout feature: from classic chiptunes to rousing metal riffs, each arc of the game is defined by unlocking a new musical motif to play through. Together, the vibrant aesthetic and empowering stylings make Dungeon Hearts feel like Brütal Legend: Match-3-RPG Edition.

Regrettably, what the game feels like is undercut continually by how it plays. At first, I thought the frustrating control difficulties were rooted in my silly insistence to jump right into the game with my Macbook Air’s onboard trackpad. Optimstic that the addition of my mouse was a sane choice I should have made in the first place, I jumped right back in and restarted the game. Even still, the truth remains: on PC and Mac, Dungeon Hearts‘ controls are major roadblocks to the success of the experience.

Colored circles can’t be “swapped” in any way, meaning you need to drag the final blue orb needed to complete your trio over to its matching pair through a sea of impassable circles that form what amounts to a maze. As it turns out, trying to complete a maze as parts of it shift to the left of the screen, and eventually disappear, is continually frustrating. Even with the touch controls of an iPad, there is a constant fight to avoid slipping your cursor off of the game’s gems, and make it anywhere in time to achieve a match. This element of the concept feels like innovation for innovation’s sake, and sadly prevented the experience from ever really taking off for me. Instead, I felt stuck in that quintessential gaming limbo, where you’re always on the cusp of enjoyment, but can’t seem to surmount the game’s issues to get there. 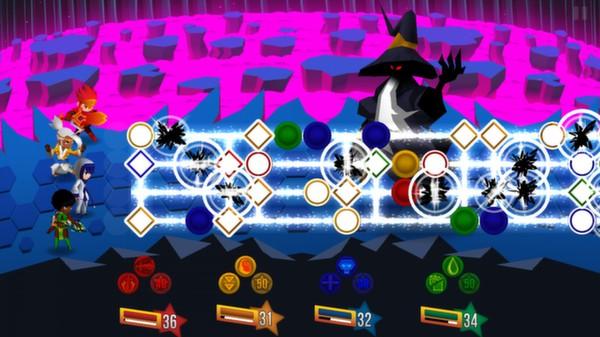 Dungeon Hearts‘ core mechanical clunkiness is hard to get past due to a surprising lack of variety. Surprising, of course, in the sense that the game is an extremely rich visual tapestry which is constantly adding potentially interesting gameplay elements in – circles that power enemy attacks, stoic runes which cannot be cleared, extremely dangerous runes which cause status ailments. However, with each element coming into play without any substantial changes or evolution of the gameplay mechanics along the way, the game quickly begins to creatively outpace its controls, with a reach that constantly exceeds its grasp. That is to say, for all the illusion of depth, Dungeon Hearts doesn’t give you any way to substantially slow down movement, add nuance to your ability to match up runes, or introduce ways to combat incoming dangers. It simply piles on mechanics while holding you accountable for integrating them into its core control scheme, which cannot scale to meet the demands the game puts on it.

For die-hard match-3 fans always eager to give a new genre addition a chance, this one’s price tag makes it an inviting experiment filled with genuine love and lots of potential. For anyone else, however? The sad reality of Dungeon Hearts is that it might be better to purchase the soundtrack and pass on the game.