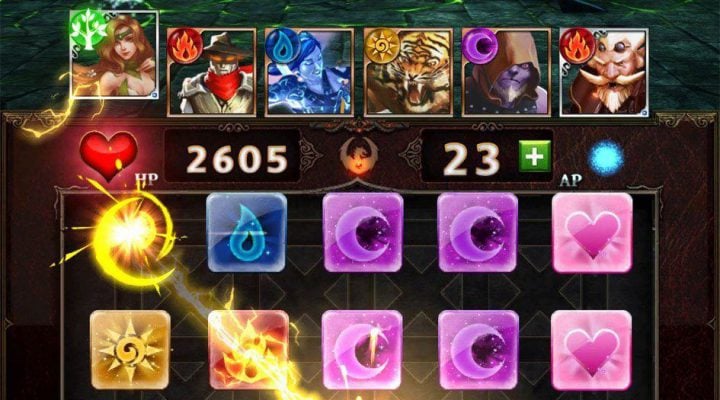 Gameloft boasts 1 million game downloads a day and prides itself on making all of its games in-house. Still, those house-made games have scored low as often as high. The company’s latest release, collectible card battler Dungeon Gems is hardly original but manages to perch on the elevated end of the scoring see-saw thanks to slick graphics and an interesting matching mechanic.

Without over-exerting itself, Dungeon Gems spins a yarn of dragons and golden hoards, and then urges us to gather a party of heroes to retrieve said hoard. And why would we need heroes to cart out barrows of gold? Because the path to independent wealth is heavily guarded by giant spiders, demons, and undead, and none of these monstrosities are happy to see us. 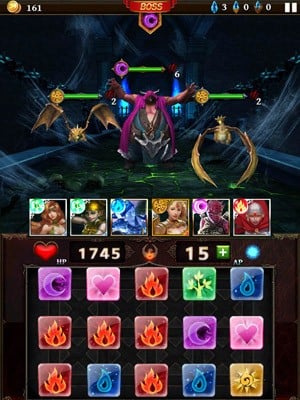 Taking for granted that hostile hellspawn should be taken seriously, you begin by creating a party of five heroes from a limited starter group. These heroes are aligned with various elements—wood, water, and fire—or are imbued with the power of darkness and light. It’s important to use heroes in strategic combinations because each dungeon you enter is also elementally aligned. In a rock/paper/scissors type of arrangement, water beats fire, fire beats wood, and wood beats water (light and dark are equivalent) so success depends on taking those relationships into account.

Of course while important, party make-up is literally only half the battle. The other half is knowing how to use elemental runes. Combat in Dungeon Gems is turn-based, and attacks are done by drawing lines among adjacent runes. Damage varies greatly depending on your heroes’ base attack rating and the number of runes you connect; connecting five of the same runes grants you a powerful “fever” rune which can be used to decimate your enemies. Along with rune combos, your other best weapon is your supply of action points (AP), which allow you to either connect non-matching runes or to use special hero skills.

Once you’ve entered a battle, you have to survive several rounds. If you get through them all and win, you’re rewarded with gold, tokens (used for buying heroes) and additional heroes which you can collect or use as raw material to upgrade your party. Heroes come in common, rare and super-rare varieties, and second to combat, upgrading them is the most fun Dungeon Gems has to offer. 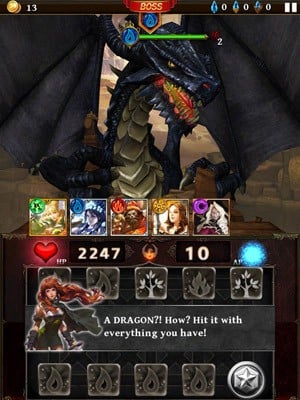 Heroes can either be enhanced or evolved (AKA, made more powerful) and each process has a cost of materials and gold. After choosing an active hero to upgrade, you select up to five other heroes to use as materials (there’s something weirdly cannibalistic about this mechanic) and provided you have the necessary gold, you can then upgrade your active hero. The importance of doing this can’t be overstated, since progress in the game absolutely depends on it.

Of course, it can all be sped up quite a bit if you’re willing to shell out a few bucks. Dungeon Gems is built on a fairly common free-to-play model, the kind that throttles your play sessions unless you frequently spend money to replenish your energy. It also encourages you to spend money on three other things: additional hero slots (since your initial number is fairly limited), additional heroes, and additional energy to use in special (high-reward-yielding) daily and weekly events. Depending on how spend-averse you are, these mechanics could be seen as a reason not to play or a perfectly acceptable, free-to-play fact of life.

Despite embracing the questionable energy model, Dungeon Gems has many undeniably good things. First, it looks fantastic. Dungeons, enemies and visual effects are rendered in awesome detail, and the range of heroes is impressive. Visuals also add punch to combat and excitement to the hero upgrade process. Second, combat demands strategic decision-making which keeps it fresh no matter how long you play. Finally, the game’s social aspects don’t become bothersome.

In surprisingly gentle implementation, other players enter the picture as helpers you bring into battle with you. These are chosen from heroes owned by people already playing the game, so there’s no need to bug your non-Dungeon Gems-playing Facebook friends for help. Better yet, these battle “helpers” (yours too, when they help someone else) can be rewarded with “thumbs up” icons that can be used, when you have enough of them, to buy new heroes.

Dungeon Gems is readily compared to other collectible card and matching games which means it isn’t a ground-breaking game. Even so, it’s stylish and well-made enough to warrant at least a few hours of game time. And though its energy model might alienate some players, it’s got enough depth and entertainment value to convince a good number of them to stick around and keep playing (and paying).