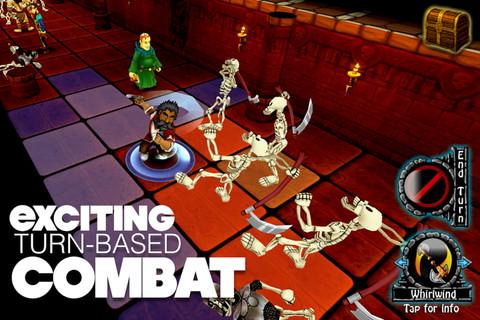 Dungeon Crawlers is as funny as it is fun

Dungeon Crawlers isn’t just the name of a genre anymore. Now that genre is also the name of a game! Not all that surprisingly it’s about, well, dungeon crawling. Sure, they’re not winning any points for brazen titles, but it has everything you could want in aDiablo-esque dungeon exploring game. Goblins, oozes, treasures, weapons, magic and… Ghostbusters references?

Wait… what am I talking about? Let’s take the names of the playable characters themselves, which all bear an eerie resemblance to some our favorite ghost bustin’ heroes from the 80’s. But instead of Peter, Ray, Egon and Winston here you get Peytar, Roy, Aegon and (my personal favorite) Failston. Get it? Seriously, that’s actually a really good turn of phrase there. They even bear a funny resemblance to the movie characters.

Those little flairs and touches pop up all over the place while exploring. Sometimes it’s conversation text, the names of items, or even in the chapter titles. It’s not over the top slapsticky, and they seem to revel in taking the subtle path each and every time which, personally, I prefer.

Of course, humor is subjective and won’t necessarily appeal to everyone. But the good news is that it isn’t overbearing or too in-your-face about it. It’s just that it’s quirky, and isn’t afraid to have fun with the fantasy genre. When most fantasy games seem way to comfortable to stick to the same stale conventions, I find it refreshing that someone is happy to color a little outside the far too established lines.

Of course the RPG parts of this quirky RPG are still nice and crunchy. You’ll explore dungeons, fight tactical battles and equip various items while going up in level and getting more and more powerful. It’s not the deepest system on Earth by any stretch, but I was happily surprised at how much actually ended up going on under the surface.

The game splits its time between moving around freely exploring the dungeon and getting into tactical battles. While exploring, you move around one character that will represent everyone and you don’t need to manage all of the party members. Whenever you run into goblins or slimes or whatever, the battle mode kicks in.

When that happens the floor becomes a grid to measure movement, and you’ll control each character individually. It becomes a game of tactical thinking, moving your pieces around a huge chess board to flank, block and attack the enemy. Your characters have the typical types of powers and abilities, with a ranged magic dealer, a healer, a barbarian, etc. The game’s writing may tread into unfamiliar fantasy RPG territory, but the rest of the game really doesn’t. 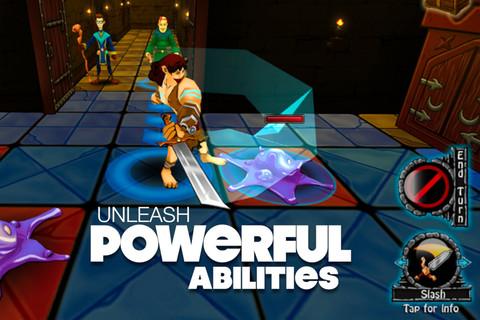 And that’s totally fine with me. Give me good solid gameplay mechanics combined with witty writing any day of the week. To be honest, the game really only has a few tiny drawbacks to it. It seems to make poor decisions when you tap where you want to move your guys, and you need to really zoom the camera around so you can really zero in on your targets.

This is doubly annoying since if you tap somewhere that your character can’t get to, the game plays this really really really annoying buzzer sound that sounds like you just got bounced off stage during an 80’s game show. It’s super out of place and seriously cringe inducing. That’s probably my biggest complaint about the game, so it’s really pretty good.

Sadly I think the nameDungeon Crawlersis so generic that it will probably have a hard time standing out on the App Store. The title doesn’t convey the witty writing, which is honestly what makes the game stand apart from the other tactical RPG’s out there – and it’d be a real shame if you missed playing this one.