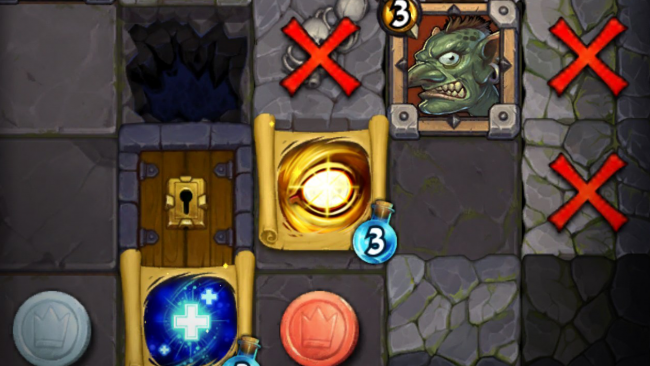 I’ve never played the original Dungelot, but I understand it was quite good; a fact emphasized by our glowing review. That means I can’t directly compare it with the recently-released free-to-play sequel Dungelot 2, but it also insulates me from any comparative bias I might have. After all, I can’t say I liked the first one better if I haven’t played it, right?

Dungelot 2 is a very simple twist on the Rogue-like format. Most of the familiar elements are here – randomly appearing monsters and treasure, one-click combat and perma-death – but instead of having to navigate a labyrinth of rooms and twisted corridors, the dungeon is represented by a simple grid. From the entry point of each level, you can “uncover” any adjacent room – that is, any square on the grid – by tapping on it, revealing creatures, loot, traps and other such dungeon decor.

It’s all very simple, even the combat, which is resolved by deducting an enemy’s attack value from your character’s hit points, with a certain element of randomness introduced by the presence of special skills, buffs or previously uncovered totems. Because of that, the action tends to be fast and furious, but there are elements of strategy to it as well that become more apparent as you play. In a way, it’s kind of like poker: Luck is always an element, but the more experienced you become, the better you’ll be.

Experience also applies in the more traditional RPG sense. Between levels, heroes can upgrade their health, armor and mana, and unlock special skills that will give them a better chance of surviving ever deeper into the dungeon. It all costs money, of course, specifically gold that you’ll collect in your travels. And of course also purchase from the in-game store – this is a free-to-play game, remember?

Even more useful than gold are the runes that serve as a sort of secondary currency for very specialized, high-value purposes, like resurrecting your hero after death or opening portals that allow you to begin your next expedition at a deeper dungeon level. But runes are also extremely rare, and while you’ll occasionally find them on your travels, you’ll eventually have to pay for them if you want to continue taking advantage of their benefits.

And of course, there’s the ubiquitous gameplay timer, which limits how frequently you can go spelunking. The timer is measured in ham – as in the meat – with each dungeon requiring a certain number of hams to enter. Higher level dungeons demand more ham to access, and it restores very slowly, at a rate of just one ham every 30 minutes; fortunately, in what I consider a very smart move by developer Red Winter Software, you can purchase a “Golden Ham” that provides an endless supply of meat (and thus, unlimited access to the game’s unlocked dungeons) for $2.99. By eliminating the most restrictive free-to-play element, it allows serious fans to effectively purchase the game – something I’d like to see other free-to-play games offer in the future.

The graphics have been rather dramatically upgraded over the original Dungelot, but they’re very static – the overhead map that serves as the dungeon selection menu is nicely animated, but that liveliness disappears once you’re inside. The interface also feels very limiting. There’s no way to access your character’s inventory to find out what sort of buffs he or she is using, nor can you get to the in-game store once you’ve descended underground, so if you happen to run into grief and don’t have sufficient runes to buy your way out of it, you’re out of luck.

It’s not a huge issue, generally speaking, because you don’t really need to know what’s in your inventory anyway, and restricting the ability to buy gold and runes while underground actually makes sense from a “logical” perspective. (Health, armor and mana may be purchased from “stores” in the dungeon that appear every five levels.) 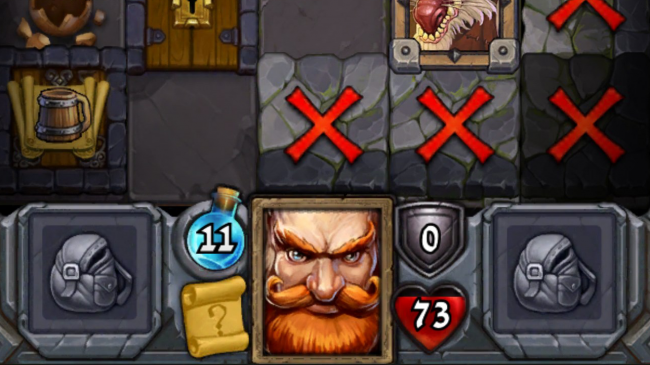 More annoying, at least potentially, is the way the game handles the aforementioned “buffs,” which are items you’ll collect on your travels that will be used to improve your hero during the next run. The more buffs you have, the more powerful your hero will be, but they’re shared between the game’s three classes and there’s no way to hold any back for future use. So if you collect a large number of them with your high-level warrior and then take out a low-level mage on your next run and die prematurely, they’ll all be lost – a simple enough situation to avoid (don’t use crappy characters if you have a lot of buffs) but one you shouldn’t have to worry about in the first place.

It does deserve credit for getting the free-to-play angle right; there are obviously some pressures to spend money but, the magic ham aside, it’s perfectly playable without spending a dime. You’ll die more, and have to grind more, but that’s the nature of the game, and honestly if you’re put off by either of those things then you probably shouldn’t be playing this anyway. My real complaint is that Dungelot 2 just isn’t terribly interesting. There’s really not much to do, especially once you’ve figured out the strategic basics, and the gut-level thrill of upgrading and leveling the heroes is tempered by the extremely limited ways in which you can interact with them and the impermanence of the items they collect.

That’s the core nature of the game – extreme accessibility – and it is definitely a cute little time-passer. But as rogue-likes go, I found it a little too simple to hold my interest for very long.