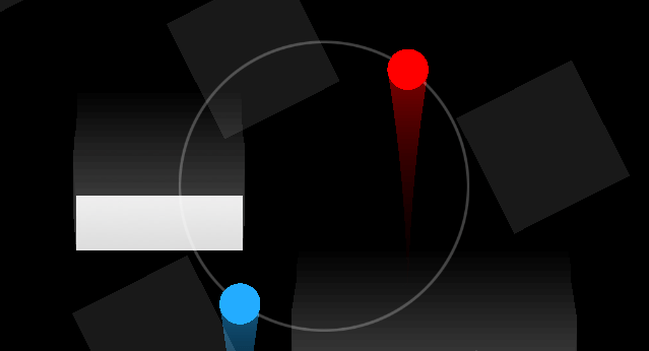 Wrap your head around this beautiful brain-melting game

My brain shouldn’t be able to contemplate what Duet is throwing at me. There are white blocks zipping towards me, and not only do I have to dodge them once, but I’m being asked to dodge them twice simultaneously. Yet here I am, ducking and diving and rotating for my life, keeping those little balls of red and blue alive… well, for the most part anyway.

I remember watching videos of Duet before I played it, and thinking that what I was witnessing just wasn’t possible – these glowing heroes dancing around the incoming, unrelenting walls of doom with relative ease and vigor. Having now blasted my way through Duet, and despite having died many, many times over, I feel this incredible rush and excitement at knowing that my brain is capable of parsing these ridiculous situations at breakneck speed. Duet is a game all about challenging your eyes to stay focused, and managing to overcome adrenaline-filled adversity.

Red and blue are two orbs, stuck to a circular track. They’re forced to always be opposite each other, meaning that as one attempts to dodge around obstacles, the other must move around the circle to match their movements – potentially crashing head-first into a different obstacle. Duet asks you to keep both orbs alive, tossing and turning around obstacles in the most bizarre and seemingly impossible ways.

The rush you get from Duet is sublime. It doesn’t seem like you should be able to pull off many of the movements and spins you achieve; yet there you are, blasting your way through yet another wave of white blocks, and feeling like a champion all the way. Later into the game the levels become much, much more difficult, but once you overcome these anger-inducing set-ups, the payoff and the relief are even greater.

Each chapter throws a fresh new idea at you, whether it’s moving blocks, rotating blocks, or even invisible blocks. This helps to keep the action fresh throughout, and you’ll want to keep try, try, trying again simply to see what else the game has in store. The constant deaths well into the game might possibly have been irritating, were it not for the relatively short levels – when you die, you know you’re only ever a few seconds away from what killed you, so it’s rarely a massive bother.

Duet has masses of style. The minimalist visuals are striking, and allow your eyes the ability to focus on what really matters – staying alive. Meanwhile the bouncing, techno soundtrack matches the play perfect, and feels especially lovely with headphones on. As the level pulses to the beat, you can’t help but be entirely drawn into Duet‘s world.

What really makes Duet work so well is the tight controls. You simply press the left-hand side of the screen to rotating anti-clockwise, and the right side to clockwise-it-up. Whenever you die, you know that it was your fault, and not the controls in any way. The game is incredibly streamlined too, adding to this tight effect – menus run into the game, and quitting out of a game slaps the menu back up instantly with zero loading times.

The main game is fantastic, as is the Endless mode. Rather than being a one-hit-to-death style, you’re given a small amount of health. As randomly-generated blocks come streaming at you over and over again, you’ll be sent back a short way if you get hit, and lose some health. Health regenerates slowly, meaning that you can potentially get hit a few times, yet still get rather far. Leaderboards make this mode something that I will no doubt be coming back to time and time again. 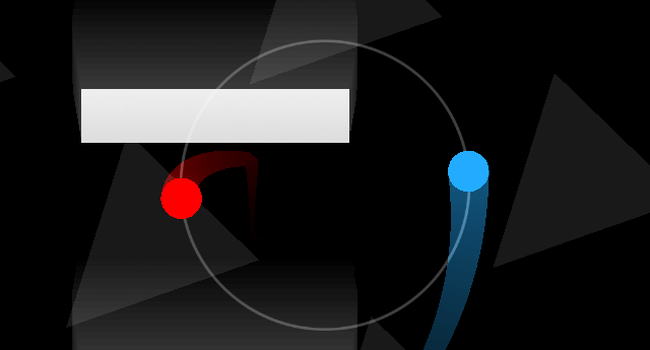 Of course, as you’ve probably guessed by now, those more casual players who didn’t enjoy experiences like Super Hexagon, Boson X et al, will probably find the difficulty of Duet quite jarring as well. Plus, most players are going to find that they need to take a break every now and again – Duet can really mess up your eyes, and everything will look like it’s moving down when you stare away.

Duet is a fantastic, brain-melting ditty of an iOS game. It’s a hypnotic, “try, try again” love song that you just won’t be able to bring yourself to feel hatred towards, despite the numerous splattered deaths that will tear at your heart. This is essential mobile gaming.