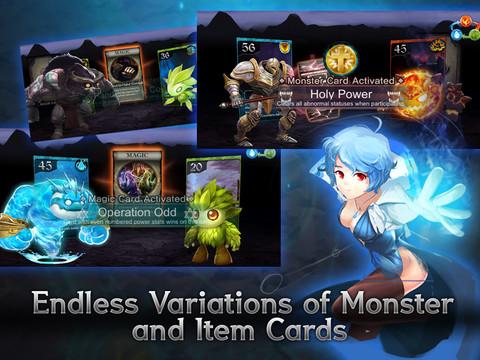 Duel of Fate is insanely addicting, even if it’s not playing with a full deck

I never was much of a Magic: The Gathering player, but I’ve played enough to know that the appeal of the collectible card game genre lies in the cards themselves. Many videogame developers seem to miss this point. Maybe their goal is to attract new players, maybe it’s to provide something that differentiates their project from the growing morass of battle card games across all platforms, but all too often they mix in flashy minigames and other froufrou that only detracts from the experience.

Gamevil clearly knows better, and that’s why their Duel of Fate is such a delight. There might be a few cards missing from its otherwise complete deck, but few other apps so perfectly trigger memories of late weekend nights with close friends and a stack of fantasy themed cards.

Even if you don’t share those memories, part of the beauty of Duel of Fate is that you don’t have to be a Magic nerd to play it. Its intuitive “rock paper scissors” setup couldn’t be simpler, really: fire cards beat nature cards, nature cards defeat water cards, and water cards overpower fire cards. Keep that simple arrangement in mind as your six cards are dealt for each round, and you’ll have an easier time understanding secondary cards that deal bonuses like extra damage and defense. It all works so well that you’re barely aware of the 20 second timer that forces dawdlers into combat; by then, you’ve had enough time to read your cards and prepare an educated strategy for victory.

In fact, it’s just as likely that you miss the timer because you’ve spent too long admiring the cards themselves. For a free to play game, they’re simply stunning. I know some players bred on Magic might find their visual style too “World of Warcraft meets Pokemon,” but that seems like a silly complaint in light of how effortlessly they complement the greens, reds, and blues that define each element in Duel’s strategic trinity.

Choosing the right cards, in other words, should never be a problem. What’s more, the illustrations spring to life with excellent battle animations once you’ve dealt the cards, and thus much of the game’s charms springs from the anticipation of discovering what tricks your newest cards have up their sleeves.

At the same time, that’s one of Duel of Fate‘s few problems. It doesn’t take long to realize that you’ve seen all of the free cards Gamevil has to offer, and the premium cards available for cash aren’t too numerous, either. Considering that the appeal of “real-life” battle card game rests on the surprise of seeing your opponent whip out an epic card that you’ve never even seen before, that familiarity might spoil the experience for some players. 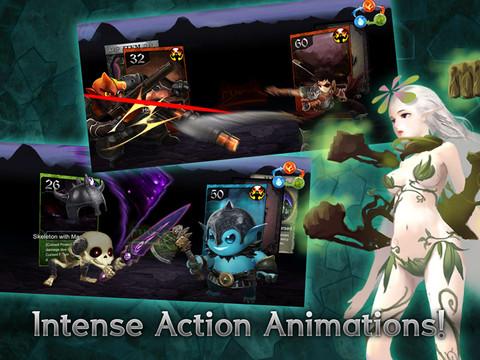 Duel of Fate, however, wasn’t meant for that level of devotion. As a mobile app, it’s best suited for quick matches on the subway or welcome distractions while waiting in a line, and I’ve found few games that match it in that light. You can even try your skill against other players in the multiplayer mode, although finding anyone online so soon after release might be a problem. At this point, it’s also a bit too soon to tell if premium cards negatively affect the multiplayer experience.

For what it is, a casual collectible card game designed to appeal to every spectrum of the genre’s fan base, Duel of Fate comes close to reaching perfection. I did find myself wishing that the single player mode had some semblance of a storyline for greater immersion, but not enough to consider Duel an inferior experience in its absence.

It’s that comparative lack of available cards that worries me. I like to think that Gamevil’s got some new ones away for upcoming updates, but the current version’s exciting matches only highlights their absence after a long gameplay session. Even so, Duel of Fate isan essential download if you’re looking for an introduction to battle cards or if you’d like a more streamlined version of battle cards you already love. And at the low price of free, there’s really no reason not to start downloading it right now.