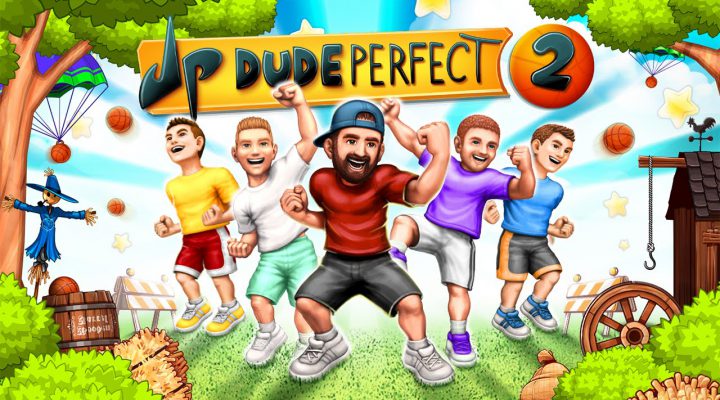 An interesting spin on physics-based puzzlers.

Nothing spectacular about the game, very cookie-cutter.

YouTube is full of a lot of crazy videos: from a monkey riding on a segway to a bunch of guys blowing up action figures in slow motion simply because they can. That second video comes from the Dude Perfect channel, a YouTube channel dedicated to doing absurd sports-related stunts and all sorts of other PG-rated nonsense.

These days it seems like if you have an active audience of over one-million (Dude Perfect has 5.5 million YouTube subscribers) that warrants you your own mobile game. Well, in the case of the Dude Perfect guys, it warrants you two mobile games, the latest of which recently released for mobile devices.

In Dude Perfect 2, players must complete various stunt challenges that involve nailing some near-impossible basketball trick shots. Equipped with some regular basketballs and some bowling balls, players must make the best of the equipment given to them, as they attempt to “net” perfect scores in each level. 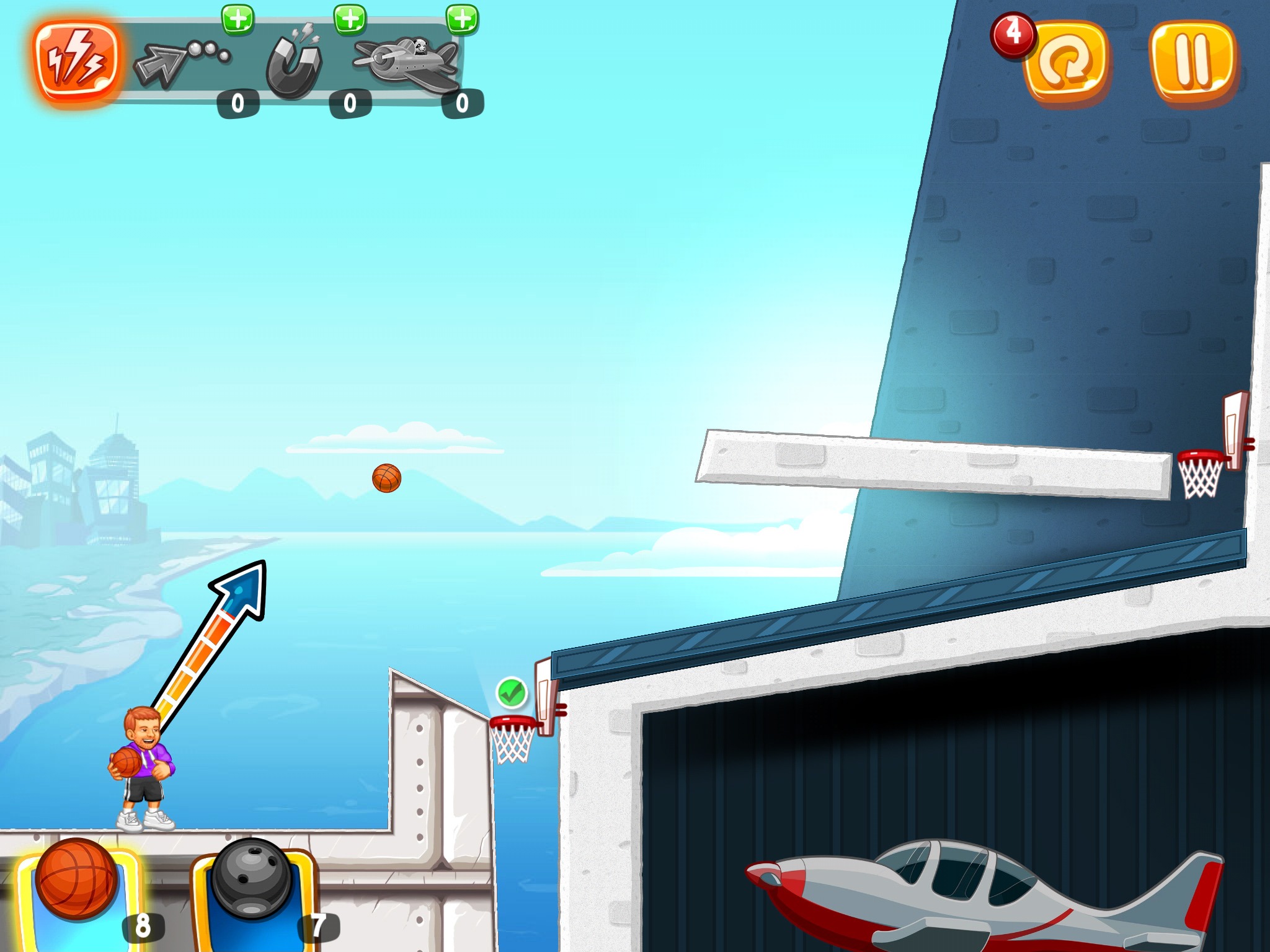 Dude Perfect 2 is a free-to-play game that’s basically a watered-down version of Angry Birds. You launch things from a stationary position in order to solve the physics-driven puzzles found in each level. Collect stars to advance further into the game. In-app purchases make the game easier. That’s all folks.

Beyond simply having the Dude Perfect branding attached to the game, there is very little about Dude Perfect 2 to help it stand out from other games that are essentially doing the same thing. The theme of being dudes accomplishing basketball trick shots is a neat twist, but keep in mind that Dude Perfect 2 is (obviously) a sequel, and players had to do the exact same thing in the first game. 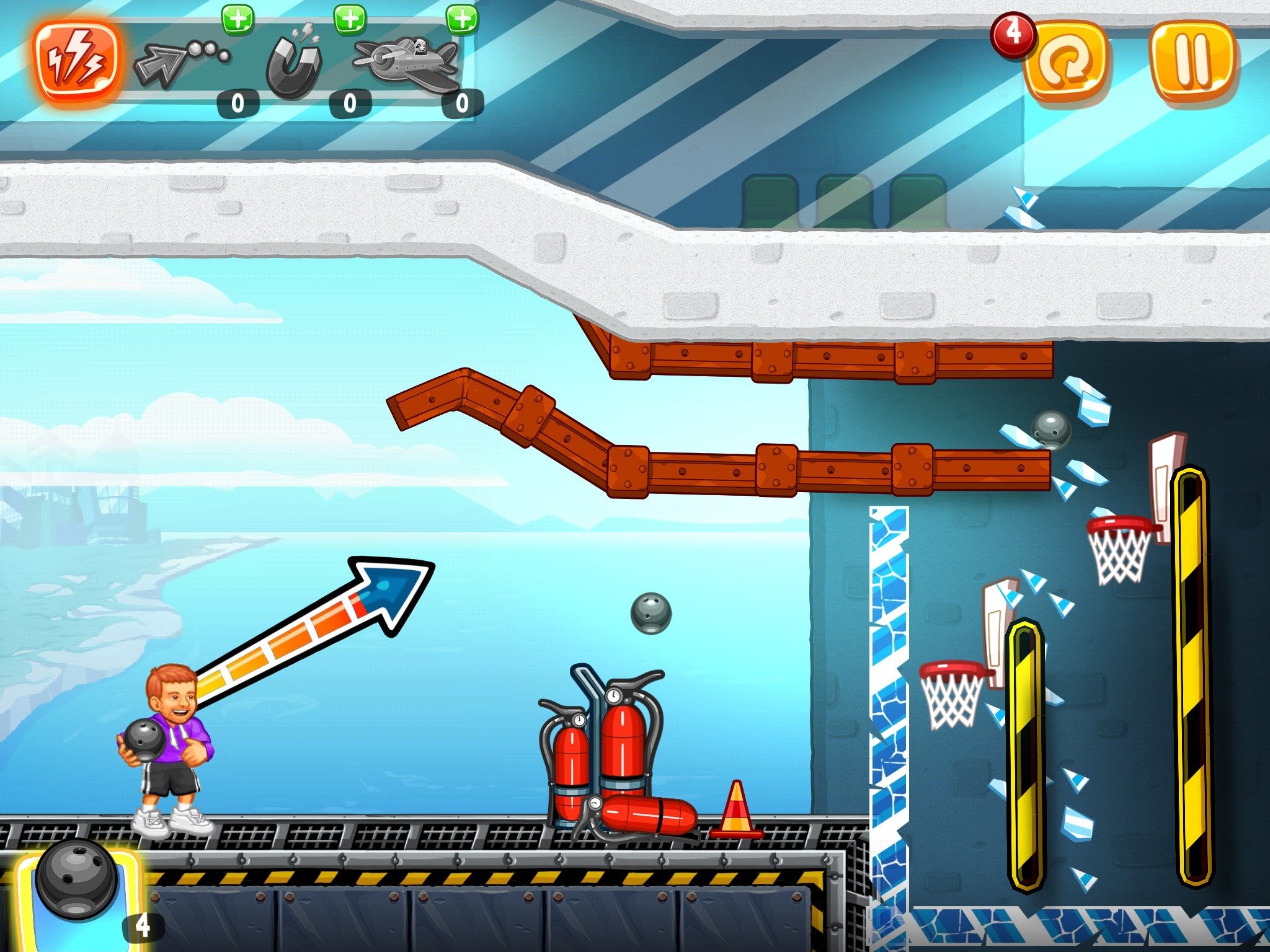 The game is based on a YouTube channel of guys doing some neat things. Right now, the five newest videos on the channel involve blowing up action figures, backwards bowling, pogo stick stunts, a “dizzy sports battle”, shark fishing, and a basketball trick shot video. That’s some pretty impressive variety…if only the game echoed that variety.

Levels in Dude Perfect 2 get pretty tough pretty quickly. Early on in the game, I was required to throw a bowling ball through one hoop to break the ice wall that was blocking the hoop, as another bowling ball (which I had already thrown) rolled in from a higher platform and fell into another hoop. The floor was made of ice, so if I didn’t time it just right the bowling ball would land and shatter the ice, bringing both the hoops down through the ice with them. 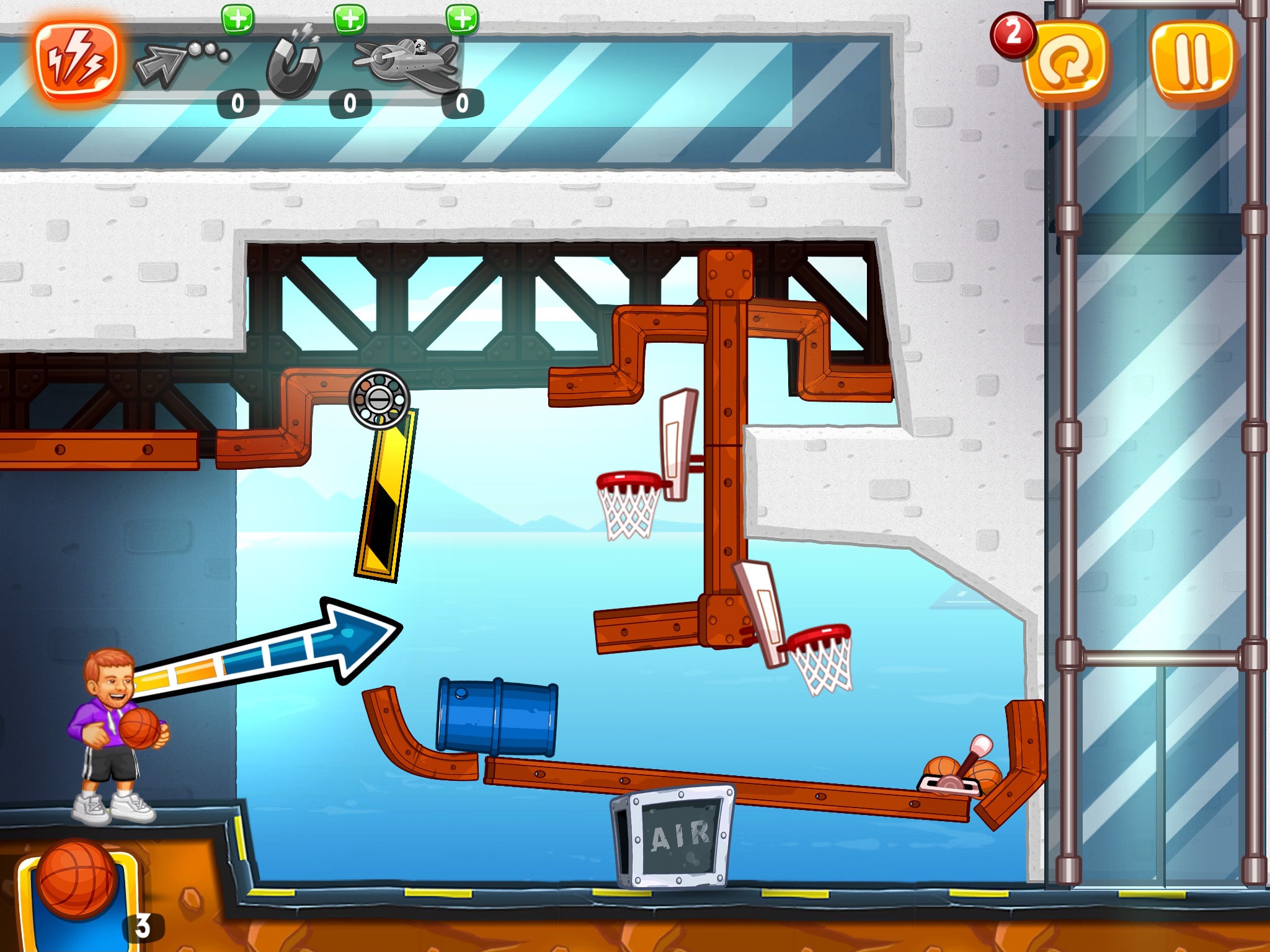 Dude Perfect 2 is a pretty tough game, made especially so by the fact that the aiming arrow isn’t that accurate at all. I found that the ball is thrown a bit higher than where the arrow points. When a game demands as much precision as Dude Perfect 2 does, having a poorly-adjusted reticule is a pretty crippling aspect of the game.

However, in-app purchases are available that transition the game from being challenging to a “can’t lose” cake walk. You can purchase a power-up that literally calls in a plane that drops basketballs in all of the hoops for you, instantly completing the level. That air-drop ability really cheapens the entire experience.

Other power-ups include unlocking the ability to aim better (I wish I was joking, it’s like they knew how useless the regular arrow is) and the ability to turn the hoops into magnets that pull in any basketball that’s in close proximity. Those last two power-ups can be unlocked by using the in-game currency you collect from completing the levels. You’re required to buy (or save up for a long time) in-game cash to use the airdrop power-up.

Dude Perfect 2 sports some refined visuals compared to the original, but at it’s core, Dude Perfect 2 is a pretty forgettable game. Unless you’re really into physics-based puzzle games, or the Dude Perfect crew, there are better games to scratch that physics puzzle itch.